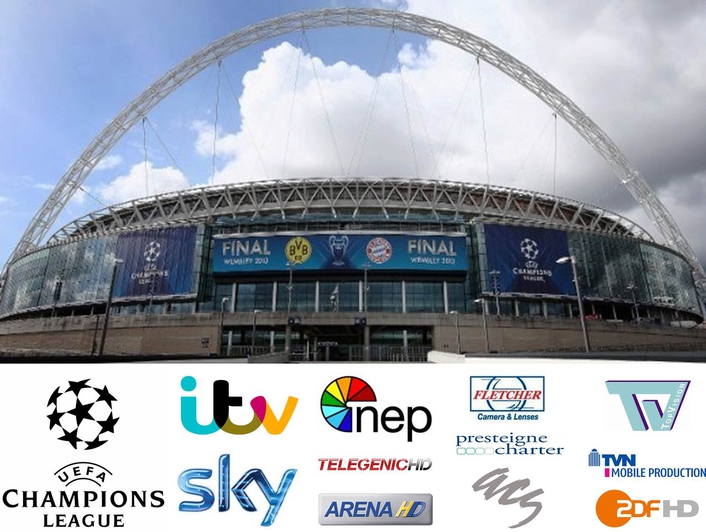 The most challenging part of having a final with as much international interest as the UEFA Champions League Final in Wembley Stadium was that the main compound is not large enough to accommodate all of the porta cabins and HD OBVan units required. So while the host compound is tucked nicely within the stadium the 11 other broadcasters were located in the green parking lot. That required a massive fibre infrastructure to connect not only the two locations to each other but also to the eight pitch-view studios that were installed inside the stadium.

The host broadcaster ITV had placed the NEP Visions Gemini trucks at the centre of the lateral production. ITV was working closely with a number of vendors on a production that included 35 cameras for the 2D production and 12 for the 3D show. Those vendors included Telegenic with the T21 and T23 trucks for the 3D production, Presteigne Charter for RF camera needs, Fletcher for UltraMotion cameras, ACS for the PoleCam and SmartCam cameras behind the goals, SpiderCam for the cable camera system overhead and Arena Television for the aerial shots from a helicopter. Sound Credit was also on hand installing more than 100 commentary positions. And last but not least, Film and TV was responsible for all the power needs while EBU handled the international distribution feeds. 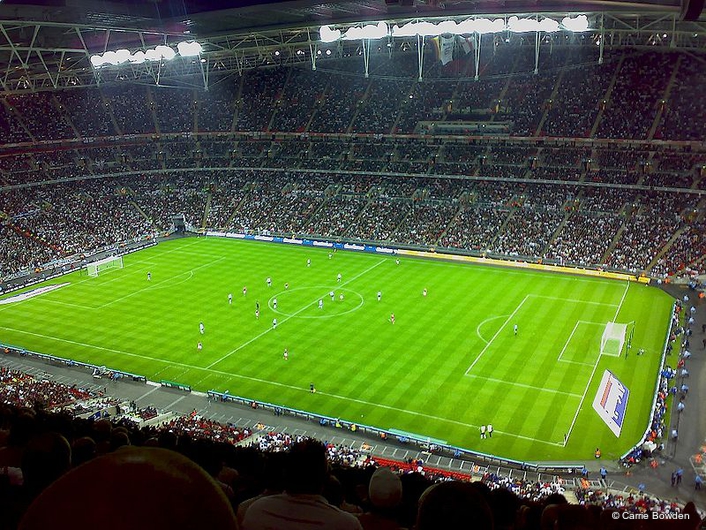 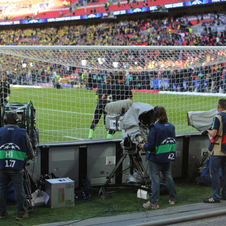 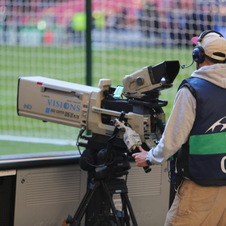 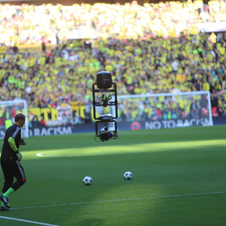 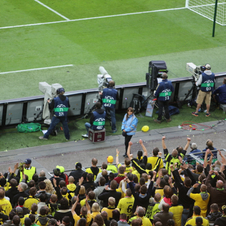 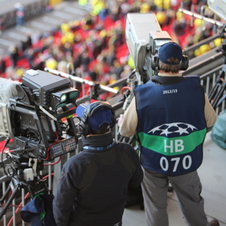 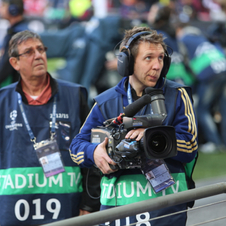 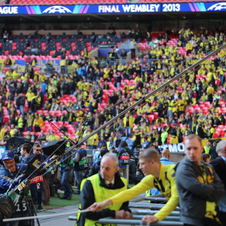 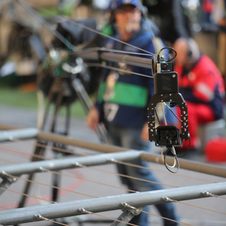 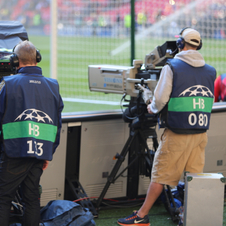 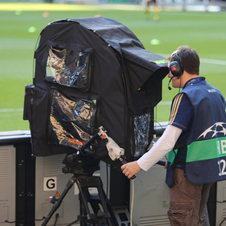 More than 44km of cable were laid in to connect cameras and the host compound to the rights holder compound where Arena OB units were in charge of ITV’s unilateral feed. Also the rights holders from Germany could be found here. Sky Deutschland and Sky Sport News had a team of 70 on hand for the first Champions League Final in history to feature two German clubs facing off against each other. The German pay-TV service made the most of the opportunity with a number of features, including the debut of a new Champions League set that will be in use for all of next season. 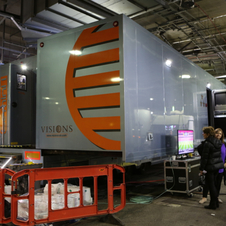 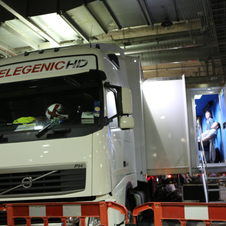 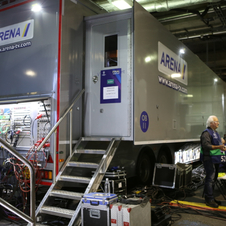 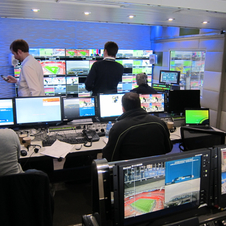 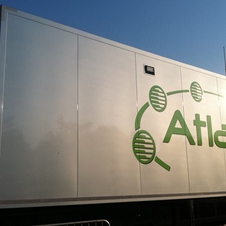 Not only was there a larger amount of pre-game programming than usual but there was also a multi-feed of four sub-channels with channels dedicated to each team, another with highlights, and a fourth with match data. Those channels were each produced in Munich as Vizrt graphics gear in the Sky Deutschland production center played a big part in the final on-air look. 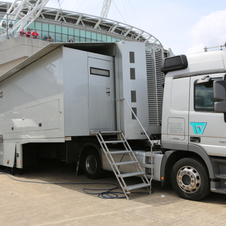 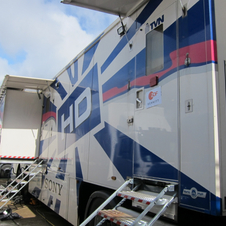 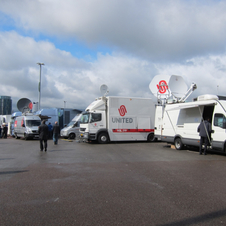 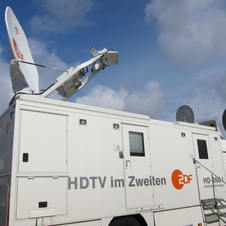 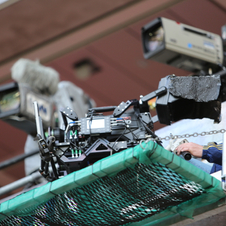 TopVision’s HD OBVan 5.1, which hit the road only eight months ago, was on hand for the production of the unilateral signal for Sky Deutschland.. Among the kit inside the OB unit are two Sony MVS-8000A vision mixers, EVS XT3 servers, a Grass Valley Trinix router, a Riedel Artist intercom, a Stagetec audio board and Sony cameras with Canon lenses. For the match TopVision provided 10 cameras for the production of the unilateral feeds. An additional 10 feeds were provided by the host broadcaster. Those feeds were all used for highlights creation as well as the sub-channels. There was also a pitch view studio, an indoor studio, and a pitch presentation platform, that were all integrated into Sky Deutschland’s unilateral match broadcast.

The German public broadcaster ZDF was on hand with TVN Mobile Production which produced the Champions League Final on behalf of Plazamedia. Four TVN trucks were on location including the TVN-Ü3HD. 40 crew members from TVN served the needs of ZDF, including 13 cameras and 5 EVS servers. Not surprisingly ZDF was posting record numbers of 21.6 million viewers.

Sky Sports 360
For Sky Sports UK all this was not enough and therefore launched Sky Sports 360 which is based on EVS’ C-Cast technology. Sky Sports 360 is a new multi-camera highlights feature available in its Sky Sports for iPad App. Found within the Champions League Events Centre of the app, Sky Sports 360 will effectively allow viewers to select and replay the action during the game from over 20 different camera angles. 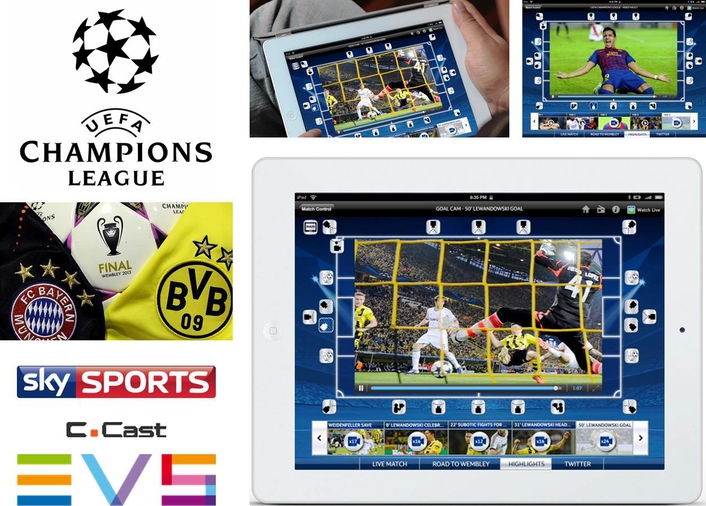 The development and the implementation was relatively painless. There was work at the OB end to install the equipment in the trucks and work at Sky’s production facilities. Sky also had to change the nature of the app to integrate the technology as it didn’t fit within the existing iOS Sky Sports for iPad application.

C-Cast now effectively ties into the existing EVS servers in an OB truck. The C-Cast Agent is installed in the truck and connects to the EVS network to retrieve content (both video and metadata) and transfer it to C-Cast Central back at base, with the first H.264 file being transferred within 45 seconds.

The Champions League Event Centre is currently just one of a burgeoning portfolio of second screen experiences available to Sky Sports subscribers, which now includes F1 Race Control and the Premier League Match centre, with much of the work going into the Event Centre was undertaken by deltatre.

Because C-Cast worked well in the UEFA Champions League Final it will be used by Sky UK throughout the Champion’s League matches next year.