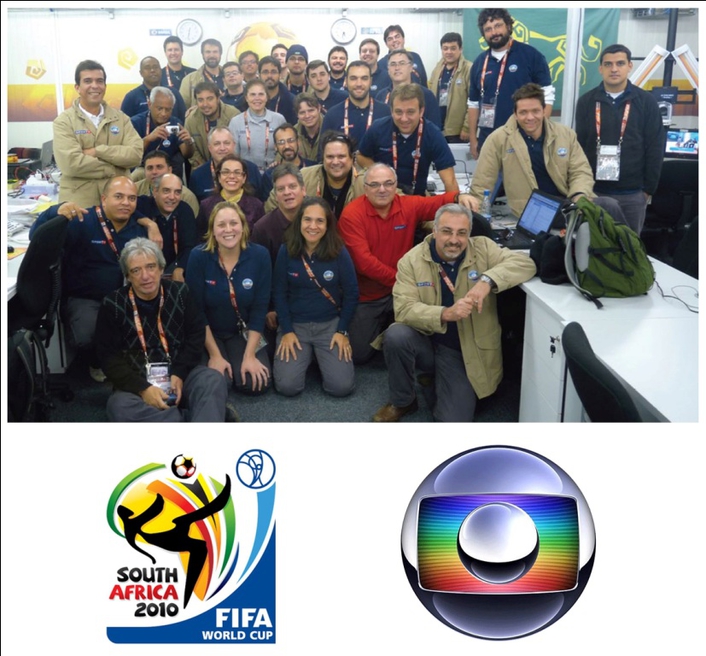 Fernanda Conte and Ana Paula Silveira (centre, front), with a fraction of the 230 members of TV Globo’s FIFA World Cup™ project
As the 2010 FIFA World Cup™ reaches its latter stages attention naturally begins to turn to Brazil’s hosting of the event in 2014, and for broadcasters in the host country that should make life a lot easier, right? “Well, in terms of the logistics we could think it will be easier but it will not be because Brazil is such a huge country,” explained TV Globo’s Executive Producer Fernanda Conte. “We will be able to have more people involved, not that we don’t have a big crew here, and, naturally, it is an advantage to be in our home country and speaking our own language.”

‘Not that we don’t have a big crew here’, is something of an understatement. A total of 230 staff are in South Africa for TV Globo, including personnel working for their satellite channel SporTV and the globoesporte.com web­site. Among that number are 120 specifically following the Brazilian national team, including 12 ENG crews.

With so many people on the road it is to be expected that they have come up with some innovations to improve their work flow. “As well as the SNG trucks around the country we also hired a small car and put our own fly-away kit on top, that made it a lot more flexible and able to get to places faster and easier than with the regular vans,” added Executive Producer Ana Paula Silveira.

For all broadcasters the coverage is always about more than just what is oc­curring at the event, but also how things are going back home. This time, however, what is going on back in Brazil has become a focus for many other MRLs thanks to TV Globo’s footage from the FIFA Fan Fest on Rio De Janeiro’s Copacabana Beach. “The Fan Fests have 20,000 people at the venue and during the Brazilian matches another big screen is set up outside for another 20,000 people,” Ana Paula continued. “They have been really successful, but nobody had doubts about them – we are talking about Rio, people love to party, go to the beach and enjoy soccer.”

As well as making their debut HD FIFA World Cup™ broadcasts, TV Globo have also brought the 3D experience to Brazil. “Our first 3D transmission in public was for the Brazil-Portugal game. We showed it on two cinema screens in Sao Paulo and one in Rio, and we also plan to broadcast the semi-final on 6 July and the Final.”

Audience figures so far have been very positive – as you would expect from a truly football mad nation – with the Brazil matches performing particularly well. Broadcasts from their studio at the IBC Outside Presentation Facility have also proved popular – including dedicated morning and evening shows. Meanwhile, HBS’ 32-camera plan has gone down very well with TV Globo’s producers. “The cable camera, aerial coverage and super slow-motion cam­era footage is really fantastic,” enthused Fernanda. “It has been very good for our broadcasts.”