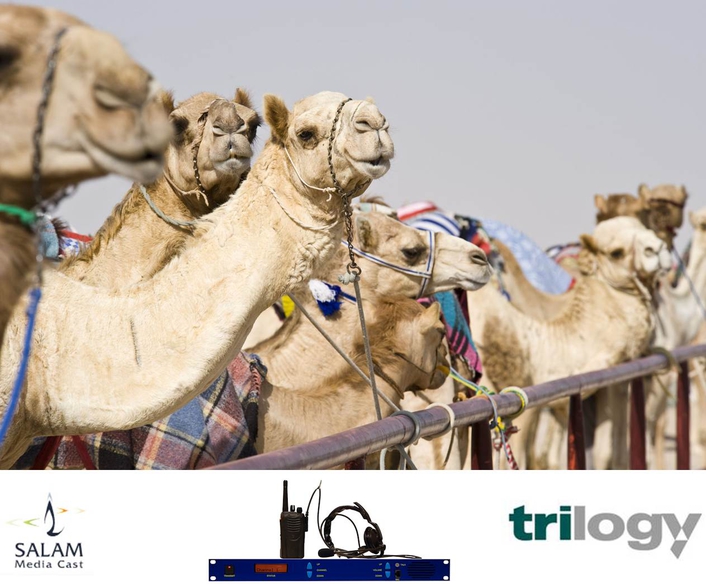 Trilogy ensures racegoers at the Al Shahaniya racetrack are kept in the running
Trilogy Communications, a global provider of digital intercom systems and Master Reference Generators to the broadcast industry, today announced the upgrade and expansion of the Commander intercom system at the Al Shahaniya racetrack, Qatar’s premier camel racing venue located 25 kilometres Northwest of Doha.

The Trilogy system was supplied and installed by Salam Media Cast for the Hejen Race Organizing Committee, which operate the Al Shahaniya racetrack. Whilst the racetrack has operated a basic Commander system for over a decade, a major upgrade to the track facilities and buildings for the 2010-11 season has just been completed, which necessitated considerable additional functionality from the communications system. The Commander system has been replaced by a larger 36 port system with significantly increased performance and functionality including a range of wireless interfaces.

Coverage of the races comes from five fixed camera positions around the track and also from five vehicle mounted cameras. Communications from these positions come from Trilogy’s Audax wireless system which uses Kenwood portables to communicate back to the gallery where a wide array of lever key panels are in use, including the popular 8 key desktop and 32 key rackmount variants.

Camels have long been revered as a treasure of Qatar's rich heritage and Hejen racing, which is one of the country’s most enjoyed sports, is an age-old tradition of the desert which is currently undergoing a revival. Races are run around an oval course ranging from 6 to 10 kilometres and races have extremely generous prizes commensurate with the sports standing in the region.

Programming in the build up to the races and the post race analysis and discussion is all provided by Qatar Television who operate their own large Commander Intercom system allowing for very easy ties to the Al Shahaniya system.

Sami El Shafai, Executive Director at Salam Media Cast, commented: “The customer was extremely pleased with the performance and quality of their existing Commander system, which has worked faultlessly since it was commissioned in the mid 1990’s. Performance like this explains the high regard with which Trilogy systems are held in the region and is the reason we recommended an updated and expanded Trilogy system for this project”.

At Salam Media Cast, we excel in the service provision of telecommunications, broadcasting, integrated systems and state of the art security solutions in the region. Through our capabilities, breed of empowered leaders and nurturing of the environment, in which we operate, our competitive advantage is maintained, guaranteeing our long term sustainability and the meeting of the demands of our shareholders.