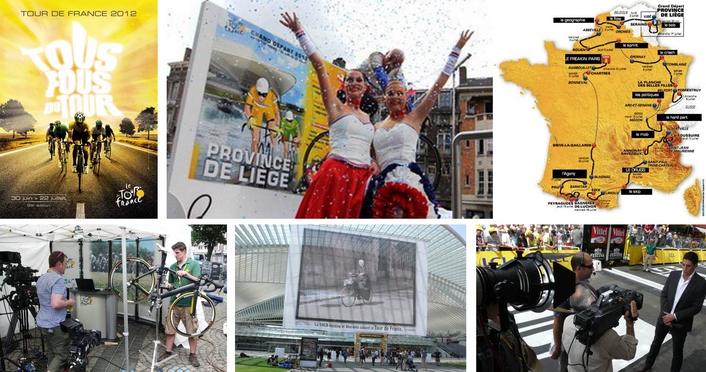 .
It started out as a publicity stunt designed to share up indifferent sales of a new sports newspaper. A century later the Tour de France is a world wide phenomenon and an icon of French life.

The 2012 Tour de France is the 99th and current edition of the Tour de France. It began in the city of Liège in Belgium on 30 June, and is scheduled to end on the Champs-Elysées in Paris on 22 July. Besides Belgium and France, the Tour will also pass through Switzerland.

On 30 June arguably the greatest show in broadcasting, the Tour de France, took to the streets of Liege in Belgium for the prologue of a race that will conclude on July 22 in Paris after covering more than 3,497 kilometres. And while the course may change every year the challenge for France Televisions and Euro Media Group, the two companies at the center of the host broadcast feed production and the feed for French viewers, is the same: set up, strike, and move a sport production 20 times in 22 days.

In fact, it is such a large circus, and with personnel dedicated to specific parts of the course (start of the race, course coverage, end of the race) that they often never meet each other because once one stage ends it is off to the next. 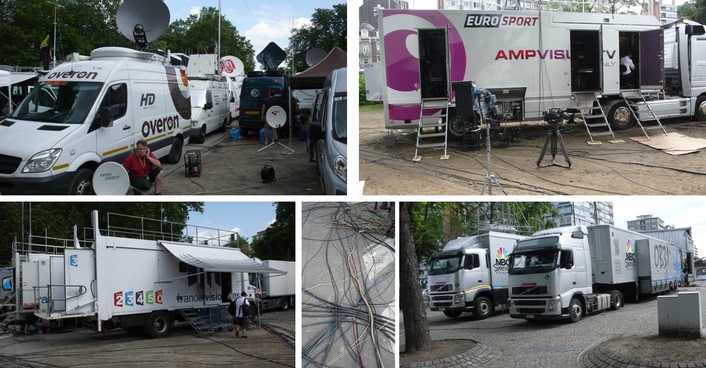 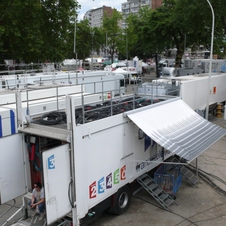 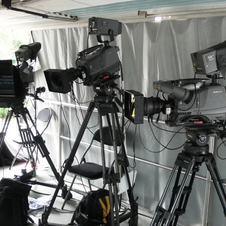 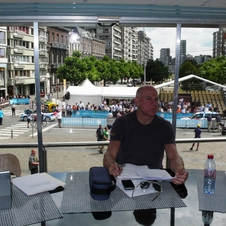 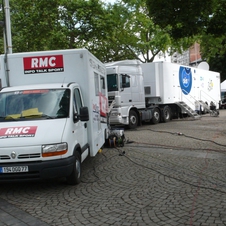 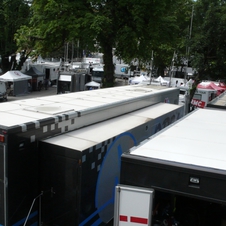 The compound itself reflects the circus-like atmosphere. During the remainder of the race the dozens of vehicles (not only the production trailers but the portable sets, generators, support vehicles, catering, and more) will be in a wide variety of locations with widely different spacing constraints. The distance between trucks can be up to one kilometer, requiring a fibre infrastructure.

“And sometimes the compound is split by more than 1,000 meters, so fiber connections are a must,” adds Geoffrey.

The core of the race coverage is the use of five high-frequency wireless cameras on motorbikes, two journalists reporting from motorbikes, and images captured from two helicopters with Wescam gyro-stabilised camera systems. The five cameras on motorbikes capture the drama and beauty of the race from within it while the helicopters cover the race and also capture much of the beauty of the French countryside that is such a large part of the production. At the finish line nine additional cameras are in place to capture the dramatic reactions of racers finishing stages and during time trial stages and like the prologue in Liege, hard-wired cameras are placed on the course. Also new this year is a camera mounted on the Tour de France race director’s car. 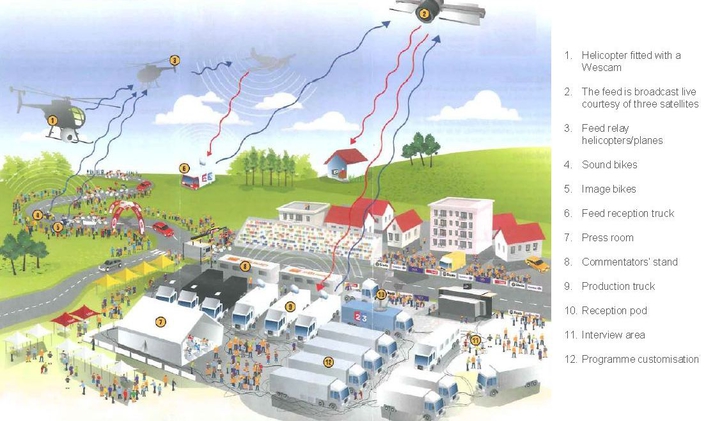 The coverage of the Tour de France with RF Motorbikes, Helicopters and Satellites

The transmission challenge
Keeping up with the racers is only part of the challenge, as the producer and director communicate with drivers and cameramen to position the motorbikes in the right spot relative to racers. The other challenge is to ensure that the camera signals get back to the broadcast compound, located at the finish line. New this year is the use of MPEG4 for backhaul transmission of signals from the field.

“We save bandwidth and can increase the quality,” says Geoffrey.

The key to getting the signals back to the compound are the use of two airplanes, one flying at a low level and one at a higher level, a helicopter, and transmission vehicles from Euro Media France that are placed at intermediate points along the course. As many as three intermediate points have been used in the past but this year’s coverage will typically rely on two. 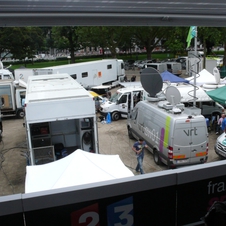 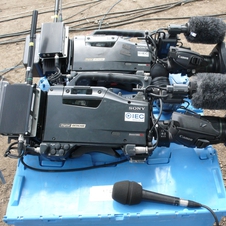 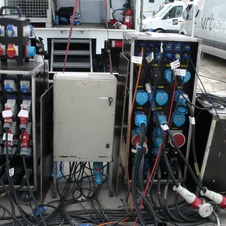 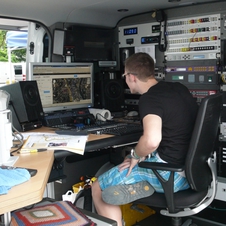 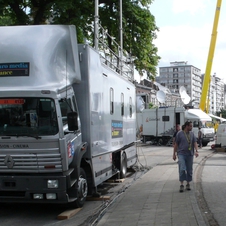 “Sometimes the distance between the plane and the truck can be 100 kilometers and we have seven transmitters on the plane so there is a lot of coordination necessary,” says Geoffrey. “On the planes and on the trucks we have very special antennas that always follow each other.”

Some of the camera signals bounce via satellite between the ground and the aerial vehicles. Given the length of the race weather will invariably become an issue and it can impact aerial coverage as well as transmission plans. The helicopters are core to the coverage as they can fly at slower speeds and hover over race leaders and also maintain a constant shot from above.

“It’s easy for the helicopter to follow the position of the bike, especially in a city with small roads and high buildings,” adds Geoffrey. “That gives the helicopter a groove it has to fly over.”

If the weather turns too bad then the use of the plane flying above the clouds becomes integral to the broadcast.

“If they fly very high we have a GPS system on each bike. The motorbikes send the GPS signal to help the airplane to define the position,” explains Geoffrey, “and the pilot can be told to fly above bike number five and he can find it.”

The production
Samuel Alegre, the chief video technician of France Télévision, overseas the network’s fleet. “The challenge is to follow the race but also show France,” he says, which is one of the reasons the main production area has a dual vision mixer set up with one dedicated to the host broadcast feed and a second, located behind it, that is used to mix the French coverage. 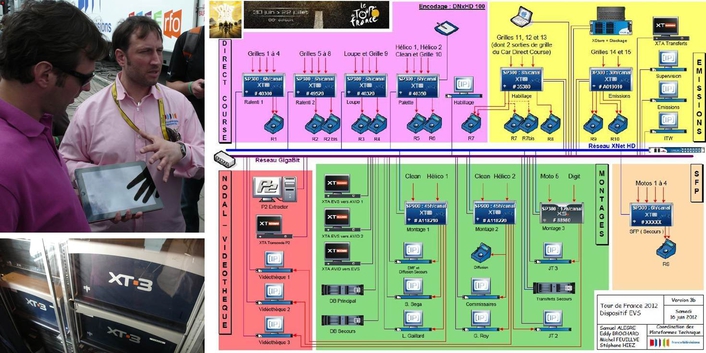 “Jean Maurice, the director, edits the program differently for the French unilateral coverage as it is usually more focused on the culture and heritage,” adds Alegre. 21 broadcasters are on location with their own production and/or uplink vans and receive the lateral coverage and give it also a country specific touch by adding material from their own ENG teams.

A key component in the OB units are the EVS servers which include XT servers and Multicam LSM for the live production, an XT server and IP Director for browsing and on-the-fly editing, and an XT server for playout. 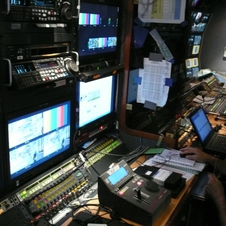 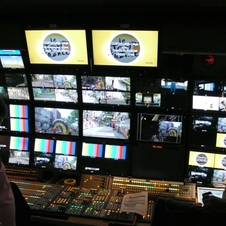 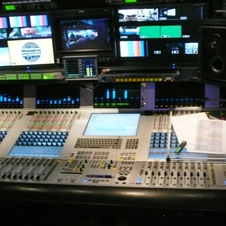 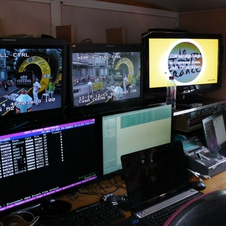 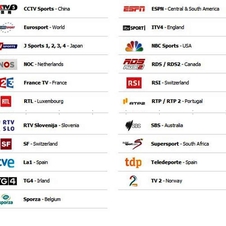 Another OB unit from Euro Media France is used for post-production needs, with three Avid Media Composers located in the truck. And then there are additional OB units from broadcasters like ITV, NBC Sports, and more. An EVS XTAccess system transfers media to the Avid and also transcodes additional footage gathered via ENG. 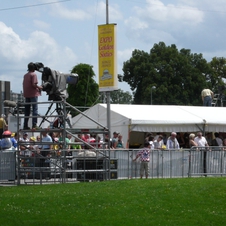 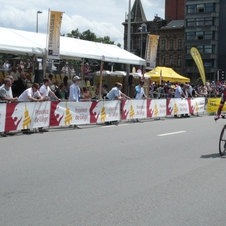 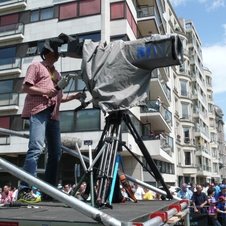 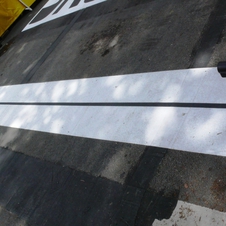 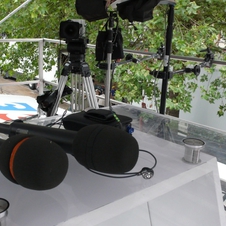