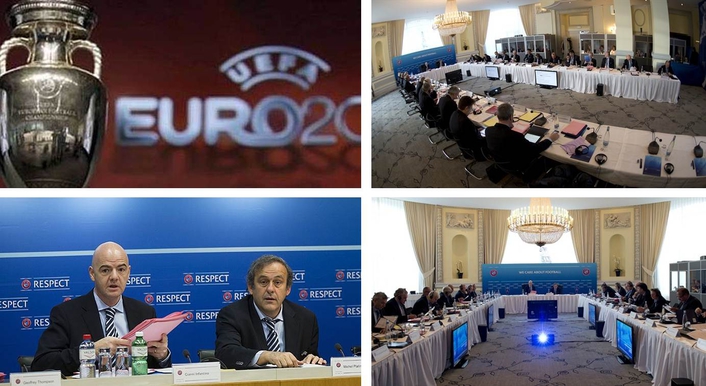 The UEFA Executive Committee, chaired by UEFA President Michel Platini, approved the key event and football principles for the “EURO for Europe”, which include:
· The matches will be split into thirteen different packages, with twelve ordinary packages including three group matches and one knockout round (round of 16 or quarter-finals), and one package for the semi-finals and the final;
· There will only be a maximum of one venue per country, meaning one stadium for each of the available thirteen packages. Both semi-finals and the final will be played in one stadium; and
· Each association will be allowed to present up to two bids, one for the ordinary package and one for the semi-finals/final package. Each national association can decide to present the same city for these two bids or two different cities.

Projected stadiums will be admitted in the bidding process, with a deadline set in 2016 for the construction of any new stadium to start, failing which the decision on such a host city could be reviewed.
The required minimum net stadiums capacities should be:
· 70,000 for semi-finals/final;
· 60,000 for quarter-finals;
· 50,000 for round of 16 and group matches; and
· Up to two exceptions would be allowed for stadiums of a net minimum capacity of 30,000 seats, limited to group matches and a round of 16 match.

All teams will participate in the qualifying competition and the thirteen countries staging matches will therefore not be automatically qualified.
A maximum of two host teams would be drawn into each of the six final tournament groups, with each qualified host being guaranteed two home matches in the group phase. There would not be any such guarantee for the knockout stages.
For the group stage, the group composition would remain subject to seeding and to a draw. However, the allocation of hosting teams to the groups would also take travel distances into account (for example, and if feasible, with flights not exceeding two hours’ duration between host cities to allow easy access to travelling fans).
The participating teams will be free to choose where to set up their base camp, without the obligation to stay in one of the host countries.

The timeline for the bidding process has been approved by the UEFA Executive Committee:
· 28 March 2013: Approval of the bidding requirements and bid regulations
· April 2013: Publication of the bid requirements and launch of the bidding phase
· September 2013: Formal confirmation of their bid by the candidates
· April/May 2014: Submission of bid dossiers and start of the evaluation phase
· September 2014: Appointment of the host cities by the UEFA Executive Committee