.
Vizrt, a leading provider of content production systems for the digital media industry, today announced that Mexico’s Televisa will use Viz Libero, Viz Virtual Studio and Viz Engine for a unique football (soccer) analysis presentation during the World Cup.
Televisa Deportes, a division of Mexico’s highly rated television network Televisa, recently gave viewers in Mexico a preview of the technology to be used during the World Cup this summer.

Calling it “Realidad Alternativa,” (or Alternative Reality) technology, the network used an interactive touch table on-air during a Mexico-Nigeria friendly match on March 5, 2014. The touch table allowed the anchors to analyze plays and discuss team strategy and play, as it happened, in real time. The effect for viewers was better analysis and a clearer understanding of the game and how it’s played.

Some of the unique features of the touch table include multi-touch functionality that allows the talent to extract a player dynamically from the table with a touch of the finger and have that player’s image appear as a life-sized hologram with his personal statistics and his value to the team.
“We’re always looking for immersive tools and technology that helps our talent tell the story of the game better, and engages fans more closely,” said Rodriguez. “It allows the talent to emphasize key moments and strategies of a game, which gives the viewer a better understanding of what’s happening.”

The touch table leverages Vizrt’s Viz Virtual Studio for the virtual players and Viz Engine, the real-time compositing engine, rendering the touch screen graphics. This same virtual technology is also increasingly being used by TV broadcasters around the world to create complex 2D and 3D virtual sets that include the same type of immersive graphics found in the Televisa touch table. The same Vizrt technology from Viz Engine is also used by broadcasters that have large interactive touchscreens on set for the talent to use for their reporting.

Televisa has been a long-time user of Vizrt technology for its football and other sports coverage. Last summer, Televisa successfully used Vizrt’s Virtual Presenter technology for the first time during the network’s coverage of the 2013 Confederation Cup tournament in Brazil. 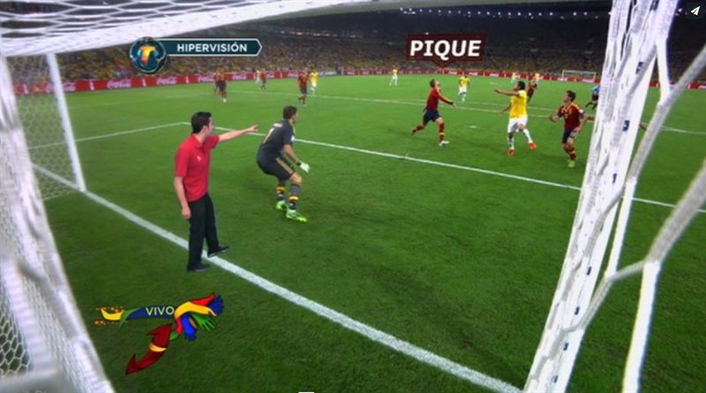 Virtual Presenter is a unique feature that is made up of two separate Vizrt software products: Viz Libero and Viz Engine. When combined, the technology is used to virtually place talent on the field with the players in a sports analysis clip. It was used at Televisa to break down many of the key moments of the tournament. The clips were branded as “HIPERVISIÓN” in Televisa’s prime-time sports show “La Jugada de la Confederaciones.”

“It makes us proud when we see customers using our technology in new and unusual ways,” said Petter Ole Jakobsen, Vizrt CTO. “The touch table is as innovative as any sports analysis technology I’ve seen used on air and I look forward to seeing it used more extensively during the World Cup tournament this summer in Brazil.”