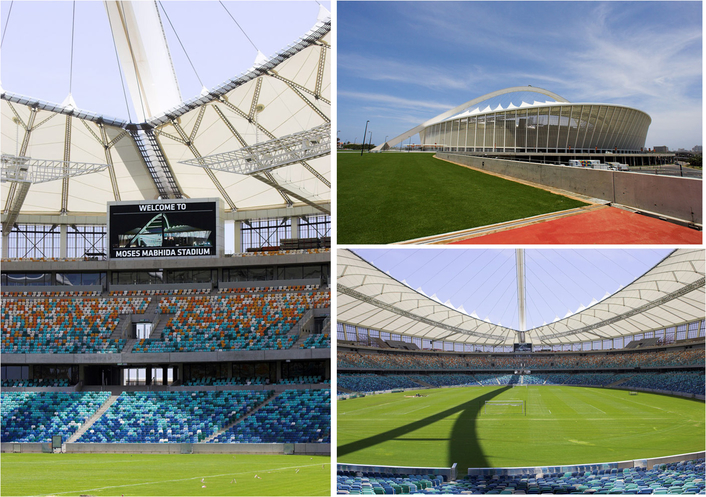 Moses Mabhida stadium in Durban
The newly-built 70,000-seat Moses Mabhida stadium in Durban is one of ten premier venues (spread across nine cities) which hosts matches in the 2010 FIFA World Cup. Located in KwaZulu Natal, and purpose-built on the site of the former Kings Park Stadium which was demolished in late 2006, it has been designed as a world-class, multi-purpose facility which will be used long after the World Cup has finished.

The overall construction budget of US $321 million (€227 million euro) included the contract for AV, worth US $2.6 million. It was awarded to System Solutions — part of the Gearhouse South Africa Group of Companies — following the success of their work at the main 95,000-capacity Soccer City Stadium Johannesburg, which will host the final.

Once again the requirement at Moses Mabhida was for High Definition IPTV, digital signage video distribution system as well as one large format, high resolution outdoor LED screen. The stadium follows a similar control architecture model to that implemented at Soccer City — with the exception that System Solutions were able to deploy the new Christie Spyder X20, since it was released after the tender had been won. 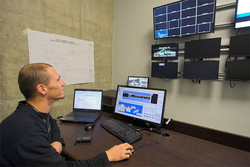 On the output stage, the Spyder X20 sends an XGA signal over fibre to the Lighthouse big screen and provides two RF Modulator feeds for the private suites (if required), two HD IPTV Encoders, an operators monitor and a source multiview.

Says senior video technician Mike Tempest, “There are slight differences between this and Soccer City in the way we have treated the public displays. In Durban we have gone for a more IPTV based system that displays a ‘Digital Signage’ channel, fed from an IPTV decoder, instead of multiple DS players.” 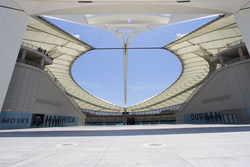 The sophisticated routing relay delivers visuals every bit as impressive as the stadium’s stunning architecture.

Measuring 45m in height the stadium covers 320 x 280 square metres, and is dominated by a 106m high x 350m long free-span steel stadium arch. This weighs 2,600 tons and is expected to become a popular tourist attraction, with a cable car running people up to a viewing platform at the top of the stadium.

The facility also includes a High Performance Centre, a campus for sporting and development academies and a smaller indoor arena. And while the seating capacity will be downgraded from 70,000 to 54,000 after the 2010 World Cup, the stadium was actually upgraded to an 85,500-seater, which will ensure that Durban has the facilities in place to host the FIFA World Cup.

Summing up, System Solutions MD, Sean Stewart, "It has been a privilege for us to be working in the two biggest stadia for 2010. Moses Mabhida has been built as an FIFA World Cup stadium and its impressive arch has already become an iconic landmark in the area."