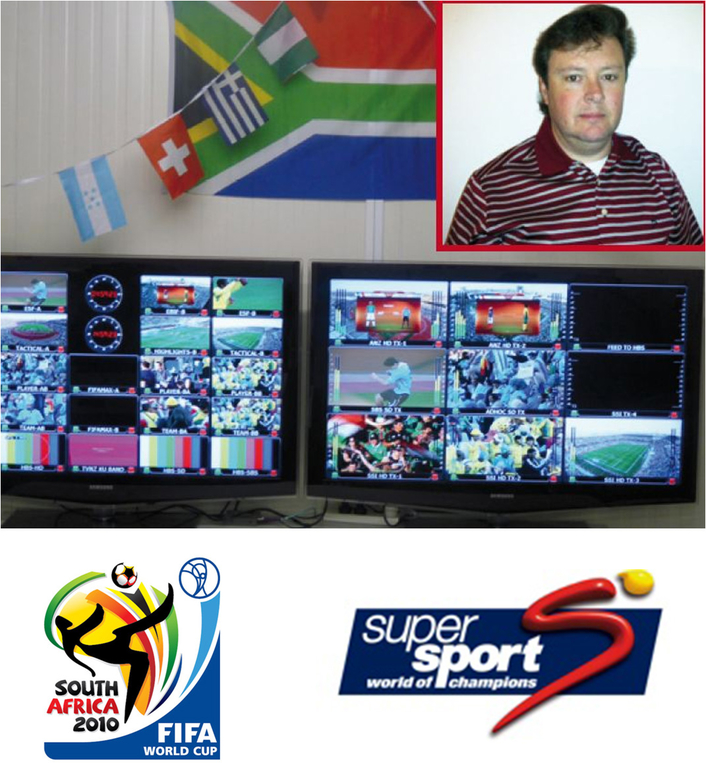 Kosie Kotze (inset) and SSI - broadcasting across Africa
Most broadcasters have the hopes of a nation resting on their coverage, for pay-channel SuperSport International it is nearly an entire continent. Transmitting all 64 matches and with 250 staff working on the project, SSI are taking the FIFA World Cup™ to more than 40 nations and island territories, from markets as large as Nigeria, Ethiopia and the Democratic Republic of Congo – as well as their home South Africa – down to tiny audiences in Sey­chelles and Sao Tome.

“We do not have viewership figures in Africa – so we can only estimate exactly how many we are reaching,” explained Kosie Kotze, IBC Satellite Operations Manager. “We currently have over a million DSTV [Digital Satellite TV] households in Africa – this equates to a potential universe of 4.8m individuals and based on the South African viewership figures we would estimate between 1-1.5m viewers in Africa for major matches.” Broadcasting in four languages – English, Portuguese, Zulu and seSotho – this is the fifth FIFA World Cup™ that SSI have aired. “Due to the fact that we are used to broadcasting on a daily and weekly basis the operation has gone smoothly,” Kosie added. “The main differences for us this time, compared to 2006, are the new innovations like using the HBS multi-feeds, the FIFA Max Server and this time we have a full HD studio.”

The motto ‘six teams, one nation’ has been a familiar one in Africa over the past month, but just how important is the progress of at least one African contender? “It is very important for us to have some African success in the tournament,” ex­plained Kosie, “we need to maintain interest in the event and, of course, we are proudly supporting all the African teams.”

It’s been a long wait for Africa’s first FIFA World Cup™ and for SSI it is important to build on the experience. “Our legacy from the event is to make sure we con­tinue to be the leading broadcaster of sport on the continent. We also hope we can penetrate new markets with the beautiful game,” Kosie concluded.