SportsNet LA Captures Dodgers from all Angles with FUJINON Optics 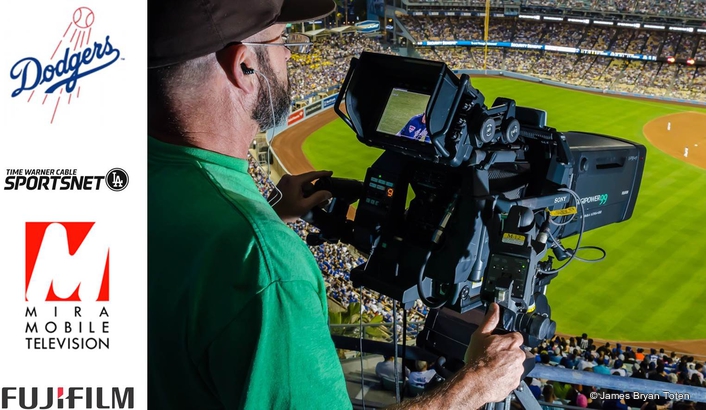 On August 29th, NEP announced that they have closed on their acquisition of the assets of MIRA Mobile Television. Per the deal, MIRA’s ten HD mobile units have joined NEP’s fleet, and MIRA’s engineering and support staff have become part of NEP’s team. The completion of this deal greatly expands NEP’s fleet of mobile units, which now includes over 80 HD trucks around the world.

MIRA Mobile’s M-12 is used by SportsNet LA for production of the Dodger’s home games and the team’s away games on the West coast. During the baseball off season, M-12 stays busy covering west coast NCAA football, basketball, and other events for MIRA customers such as ESPN and the Pac 12 Networks.

“The 99x allows us to get the most intimate shot from across the entire stadium,” said Dustin Denti, Director, SportsNet LA. “They allow our camera operators to get that extra zoom when they need to shoot between two players on the field without looking awful. And they work in conjunction with the Sony camera beautifully. The colors are amazing.” 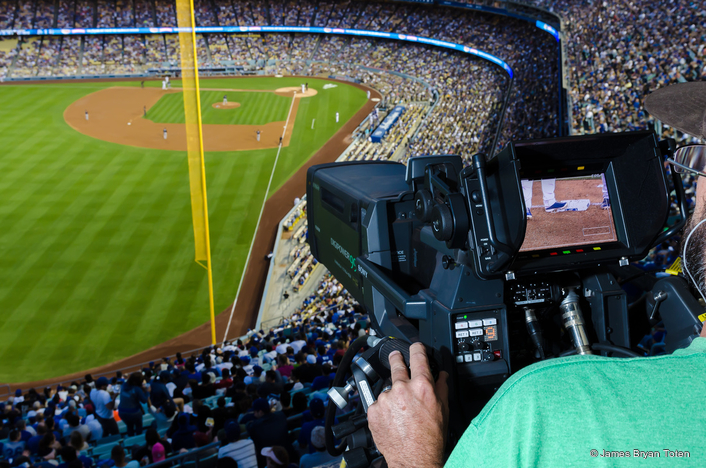 The versatility of the XA99x is most apparent at the high left field position, where the camera shoots down the third base line. From that remote position, the operator can follow the ball from its initial contact with the bat to a home run ascent over the fence. With a focal length range of 8.4-832mm, the ultra-wide angle lens provides camera operators at Dodger Stadium the ability to capture a fully panoramic image.

Speaking of the XA99x, Stuart Wesolik, Senior Video Engineer, SportsNet LA said, “We have not had a lens like this in this market in quite some time. Primarily, I like the pairing of the Sony 2570 with the 99x for the combined speed. Using a different cameras and lenses last season we were shooting at about an f4.0. This season we shot at about f8.0.  There is very little drop off on the end of the lens.”

Speed is most a factor when capturing instant replays with the I-MOVIX variable frame rate camera and XA99x lens at the high third base position. “Even at night, because the 99x is so fast with its light transmission, they’re able to run the camera at a higher speed and get amazing, high-quality slow motion,” reported Frank Coll, Director of Operations and Business Development, MIRA Mobile. “In the past with a lens that wasn’t so fast, you’d have to bump the shutter back, and you couldn’t get the great frame rate on the slow motion system. A video operator using the same camera a Dodger Stadium last year with a different lens said this year’s combination is like night and day.”

Coll also points to the new technology of the lens and its lightweight design as tools enabling operators to be more creative than they have in the past. “This lens is a lot more refined than earlier generation HD lenses. It has super fast light transmission and it’s lightweight. It has a far-reaching telephoto capability yet can also capture wide, panoramic shots. It gives our customers a lot of versatility in one lens. Camera operators really seem to enjoy working with the XA99x. It opens up their ability to be more creative in their shot selections.”

“We’re thrilled with all of the feedback we’ve received from our long-time customer MIRA Mobile and their client SportsNet LA on the performance of our XA99x lens on MIRA’s newest M12 truck for the LA Dodger games,” said Thom Calabro, director, marketing and product development, FUJIFILM North America Corporation, Optical Devices Division. “The team at SportsNet LA are truly pushing the limits of what’s possible in live sports coverage. We’re proud to be a part of their very dynamic productions.”

About FUJIFILM North America Corporation
FUJIFILM Holdings Corporation, Tokyo, Japan brings continuous innovation and leading-edge products to a broad spectrum of industries, including: healthcare, with medical systems, pharmaceuticals and cosmetics; graphic systems; highly functional materials, such as flat panel display materials; optical devices, such as broadcast and cinema lenses; digital imaging; and document products. These are based on a vast portfolio of chemical, mechanical, optical, electronic, software and production technologies.  In the year ended March 31, 2014, the company had global revenues of $23.9 billion, at an exchange rate of 102 yen to the dollar. Fujifilm is committed to environmental stewardship and good corporate citizenship.