“Sports networks, leagues, teams, and viewers owe much to this year’s class,” says Aagaard. “The influence they have had on the current sports-broadcasting industry—whether in management, production, or on-air — is tremendous, and it is a credit to their knowledge and dedication.”

The eight who will be inducted this year:

George Bodenheimer
Bodenheimer’s 13-year career as ESPN president was defined by a commitment to innovation and expansion that saw the network grow from four to eight domestic TV networks, from 20 to 48 international networks, and from one to 13 Websites. As president, he viewed his primary role as working hard to preserve and enhance that culture while emphasizing career development for all of ESPN’s people.

Ray Dolby
In 1965, Dolby changed the future of audio forever when he founded Dolby Laboratories. Over the years, the company’s audio-processing technology has improved the sports-TV experience, and today, Dolby Surround Sound and related technologies play a key role in making fans feel as though they are at the game without ever leaving the couch. Dolby holds more than 50 U.S. patents and has written papers on videotape recording, long-wavelength X-ray analysis, and noise reduction.

Frank Gifford
Following a successful NFL career, Gifford became a commentator for the NFL before his big break in 1971: replacing Keith Jackson as play-by-play announcer on ABC’s Monday Night Football. He and fellow announcers Howard Cosell and Don Meredith redefined the concept of sports broadcasting and made MNF telecasts “must-see TV” before the phrase was even invented. For 17 years, he would remain a steady presence on arguably TV’s most important sports program. Gifford also was known for his role in covering the Olympics as well as skiing, golf, and Evel Knievel’s jumps for ABC’s Wide World of Sports. In 1995, he was given the Pete Rozelle Award by the Pro Football Hall of Fame for his NFL TV work.

Ed Goren
A 46-time Emmy Award winner and a founding Fox Sports executive, Goren was elevated to vice chairman, Fox Sports Media Group, in 2010, having served as president of Fox Sports since 2000. He was executive producer of Fox Sports at the network’s launch in 1994. Goren had been senior producer at CBS Sports since 1991, working on nearly every sport the network broadcast, including the World Series, NCAA Basketball Tournament, The Masters golf tournament, and Super Bowl XXVI. As a producer, he worked on the NFL, NBA, NCAA basketball, CBS Sports’ Major League Baseball studio program, The College Football Report, and the annual Heisman Trophy Award presentation. He joined CBS in 1966, rising through the news department before moving to CBS Sports in 1975 as a coordinating producer for CBS Sports Spectacular.

Cory Leible
A legendary NBC camera operator, Leible was widely known as the daredevil of sports television. The low-flying tee-to-green survey shots that he invented became a staple of NBC telecasts as golfers approached each hole. Capturing the shots required him to fly 5 feet above the ground at 70 miles per hour, with only a safety belt to hold him to the chopper’s side. Aside from his stunts, Leible is generally considered to be one of the most accomplished handheld operators ever to work in the business. He routinely came up with the sensitive or ironic portrait: the baby sleeping in its mother’s arms during a break in the action of an especially tense game, the quirky close-up of an icicle dripping from a crossbar, or the tear on the cheek of a cheerleader for the losing team.

Paul Tagliabue
From 1989 to 2006, Tagliabue served as NFL commissioner, overseeing an era of tremendous growth, during which the league expanded, rights values increased, and fans grew closer to the brand than ever. He also was instrumental in the launch of the NFL Network and the league’s leadership position in using the Internet to connect with fans.

Jack Weir
After finishing Army service, Weir began his career at NBC in 1952 as a page and remained with the network for more than 40 years. Early in his career, he, Don Kivell, and Frank Badami sold NBC technical management on the concept of a central department where instant on-air management decisions would be made. From that idea evolved the BOC (Broadcast Operations Center), the go-to place for all operational decisions on breaking news, sports, and programs. In 1962, Weir was a key player in the evolution of TV broadcasting from terrestrial transmission over telephone lines into the satellite era. Though involved in NBC’s coverage of many major events — including John Glenn’s orbiting the Earth and Neil Armstrong’s landing on the moon — Weir is remembered by many for his work on various Olympic Games.

Jack Whitaker
During a long, illustrious career, Whitaker’s voice and presence came to define big-time golf, horse racing, and more. After spending more than a decade at WCAU Philadelphia, Whitaker moved to CBS Sports in New York in 1961. As host of CBS Sports Spectacular, he brought a unique angle to the anthology series. And for the next 21 years, he was prominent in the network’s coverage of golf’s major championships, horse racing’s Triple Crown, tennis, track and field, and boxing. He was part of the team covering the first Super Bowl. For ABC, Whitaker covered the 1984 Winter and Summer Olympic Games and the 1988 Winter Olympic Games. In the news department, he reported for ABC’s World News Tonight, Nightline, and 20/20. In 1992, he worked the America’s Cup regatta in San Diego for ABC and ESPN.

The 2012 Hall of Fame ceremony will be held at the New York Hilton Hotel on December 11, 2012. The ceremony begins at 7 p.m. and will be preceded by a networking cocktail reception at 5:30 p.m. 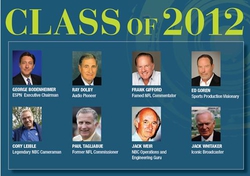 All ticket sales for this year’s ceremony will support the SVG Sports Broadcasting Fund, the industry’s first charity designed to support those in the sports-broadcasting industry who find themselves financially challenged due to illness, accident, or death.

Tickets for the 2012 ceremony are available for $550 each or $5,000 for a table of 10.
For more information on reserving your seat or table today, please contact Carrie Bowden at carrie@sportsvideo.org.