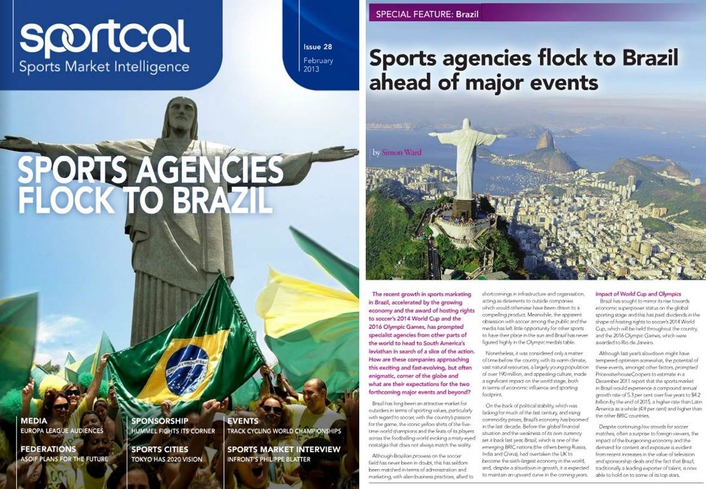 Issue 28 of Sportcal Magazine is now available and will be distributed at a range of major international sports conferences and events in the early months of the year, including Sportel Rio in March.

The magazine focuses on some developing sports markets, notably Brazil, with a special feature on how international sports agencies have sought to engage with the country ahead of next year’s soccer World cup and the Rio 2016 Olympics, and their expectations for these two major events and beyond.

The Events feature takes in Belarus as the country’s capital Minsk prepares to host the Track Cycling World Championships as part of a globalisation strategy at the UCI, the sport’s international governing body.

The Uefa Europa League, the much-maligned second-tier European clubs competition, is the subject of the Media feature as we compare television viewing figures in major and other markets to determine whether interest is being maintained amid questions about its future direction.

The Sponsorship feature examines the activity of Hummel, the Danish sportswear brand, which has resolved that, as a smaller player in the market, it needs to be different in order to be noticed.

Elsewhere, we talk to Francesco Ricci Bitti, the president of the International Tennis Federation and the new head of the Association of Summer Olympic International Sports Federations, and Denis Oswald, his predecessor at ASOIF, about the opportunities and challenges for federations in the next four-year Olympic cycle.

Tokyo, one of the three bidders for the 2020 Olympics, is the featured Sports City and is stressing the legacy from the 1964 games held in the Japanese capital and the country’s desire to recover from recent natural disasters as it participates in its second successive bidding race.

Finally, in the Sports Market Interview, Philippe Blatter, the chief executive of Infront Sports and Media, the Switzerland-based international sports marketing company, insists that its culture remains the same despite its takeover a year ago by private equity firm Bridgepoint Capital.

Those features combine with our usual table of hard-to-find data and News in Brief to provide a complete round-up of all the crucial activities in the international sports industry.

The magazine is also available online free of charge via the Sportcal website and is promoted to over 20,000 senior sports industry executives who each received a personalised email directing them to the magazine. It is also distributed directly to all IOC members, international sports federation senior executives, NOCs and national sports governing bodies.

On the Way to the Olympic Games in Sochi
Preview: FIFA World Cup Brasil 2014