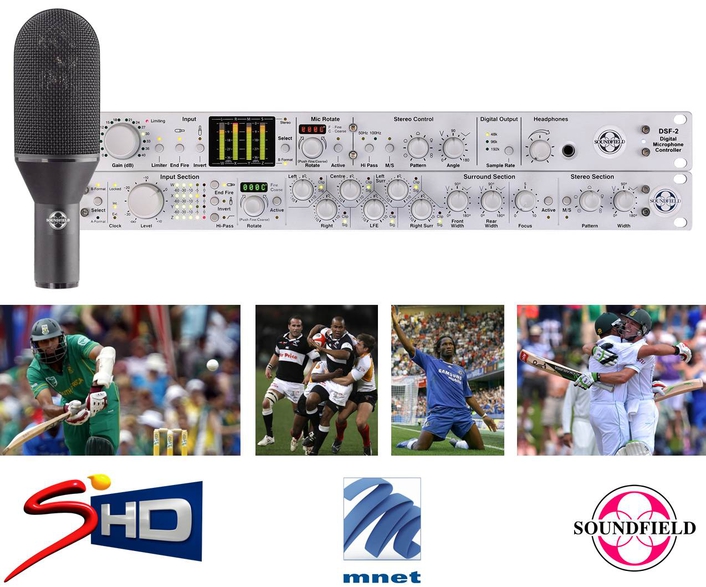 Super Sport and its sister pay-TV channel MNET were early and enthusiastic adopters of the UK microphone manufacturer's digital systems; representatives from MNET first made contact with SoundField at the IBC exhibition in Europe in 2006, the very first year the completed digital microphone systems were shown publicly. The latest installation brings to six the total number of DSF-2 systems in use in MNET’s Outside Broadcast vehicles.

Super Sport broadcasts a mix of sporting events similar to those covered by BSKyB in Europe — Rugby, Cricket, Soccer, Boxing, and Tennis's Davis Cup — so it was inevitable that when the South African channel moved to High-definition transmissions with audio in 5.1 in the mid-2000s, they would consider the HD workflow BSkyB had adopted. SoundField systems including the DSF-2 microphone and the DSF-3 digital surround processor are now the broadcast standard for 5.1 OB transmissions at Sky, and MNET/Super Sport has pioneered the same technology. Four of MNET's six DSF-2 systems are now additionally equipped with DSF-3 digital surround processors, creating a complete digital signal path for the 5.1 signal from the DSF-2 microphone to Super Sport's broadcast transmitters where needed.

"The DSF-2s are great systems, and they and our DSF-3s have done some great work on our HD Rugby, Cricket and Boxing coverage here in South Africa" comments MNET/Super Sport Audio Supervisor Mark Boyle. "Once we had a few SoundField systems up and running, the managers of MNET insisted on coming in to have a listen to the system. They trusted our technical judgement, but wanted to hear for themselves what was possible from a 5.1 microphone setup. All it took was a quick listen and they were convinced. We raised the fader on the DSF-3, they listened for a while, and were blown away.'

UK manufacturer SoundField specialises in digital and analogue surround and stereo microphone systems for the broadcast and recording industries. Based on a unique multi-capsule design, SoundField's systems allow users to capture and output audio in mono, phase-coherent stereo, 5.1 or any future surround format, using a single microphone and processor. Over recent years, the company's digital microphone systems have become the standard means of originating 5.1 audio for high-definition television transmission amongst many of the world’s leading broadcasters.