The Sound of Success

Sennheiser and Infiniti Red Bull Racing Take the Lead in Innovation and Excellence
Race Day at the Formula One Shanghai Grand Prix: The excitement mounts. Second only to the incredible spectacle of the cars is the intense sound, as the air fills with the roar of engines. It’s a meeting of sound, vision and passion. Reflecting this unique fusion, Infiniti Red Bull Racing and Sennheiser are joining forces for the 2013 racing season.

The audio specialist has been named as the first Official Audio Supplier, supplying professional audio solutions for the Factory debriefs, driver interviews and powering the DJ booth in the exclusive Paddock Club. The cooperation was kicked off at the Shanghai race with a special DJ set from Chinese superstar DJ, Jamaster A, and the creation of an exclusive edition of Sennheiser MOMENTUM headphones.

Infiniti Red Bull Racing has dominated the Formula One World Constructor’s Championships for three years, has the car to beat and a red-hot pairing of Sebastian Vettel and Mark Webber. Innovation, precision engineering, a passion for excellence, and a determination to be the best – Infiniti Red Bull Racing has epitomised these qualities. So too has Sennheiser, which has maintained its supremacy over 65 years at the forefront of high quality sound.

While Infiniti Red Bull Racing takes winning performance to the track, Sennheiser will take premium sound backstage as the first ever Official Audio Supplier to the Racing team. Sennheiser audio equipment will be used by Team Principal, Christian Horner, during his Team debriefs. Meanwhile, Sennheiser will also be helping fans get even closer to the action, with the wireless 2000 microphone series used for Paddock Club driver interviews.

A great start is all-important in Formula One: Sennheiser and Infiniti Red Bull was launching the new relationship in style at the Shanghai Grand Prix, 11 - 14 April. Sennheiser was wowing crowds with a very special DJ set by Chinese superstar, Jamaster A, who performed for race visitors at the site entrance, equipped by Sennheiser. Later the party got exclusive, as Jamaster A layed down the grooves for VIPs backstage in the prestigious Paddock Club, taking to the decks in the Sennheiser-powered DJ booth. At the European Races starting in Barcelona on 12 May, special guests of the Infiniti Red Bull Racing Team can enjoy professional sound additionally in the popular Red Bull Energy Station, which will be equipped with a Sennheiser wireless microphone system. 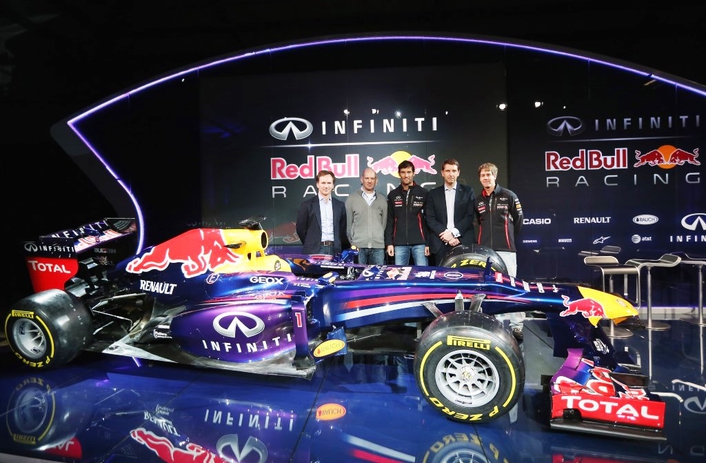 Throughout the season, the companies will be working together on a number of exciting projects that will take the sounds and sensations of Infiniti Red Bull Racing even further. The first development to be announced is the creation by Sennheiser of a very special Infiniti Red Bull Racing edition of its acclaimed MOMENTUM headphones, featuring the colours and logo of the F1 team. Part of Sennheiser’s Style Selection, the MOMENTUM combines high quality, luxury materials with incredible sound quality that draws on the audio expert’s longstanding expertise in high performance audio. This limited edition will be available to the teams and its very special guests. The MOMENTUM and additional Sennheiser flagship products such as the HD 800, HD 700, IE 800 headphones and the 9000 wireless microphone series will be on display in the Paddock Club at selected races.

“Sennheiser is used to delivering champion performance in sound through our commitment to excellence and innovative technology. Working with Infiniti Red Bull Racing is a real privilege and a great way of reflecting what Sennheiser means today,” says Paul Whiting, President of Sennheiser Global Sales. “Just as with Formula One, Sennheiser’s new MOMENTUM headphones match an aspirational, fashionable style to an unrelenting pursuit of high performance. They represent the same purity of purpose that underpins champion teams such as Infiniti Red Bull Racing”, explains Peter Callan, President of the Consumer Electronics Division at Sennheiser. Describing the relationship with Sennheiser, Christian Horner, Team Principal at Infiniti Red Bull Racing said: “Innovation, passion and performance are constant drivers in everything we do. Sennheiser’s shared commitment to these same values has advanced the science of sound for over 65 years and they continue to push the boundaries. That’s why we’re really excited to be working with the audio specialist.”

About Sennheiser
The Sennheiser Group, with its headquarters in Wedemark near Hanover, Germany, is one of the world's leading manufacturers of microphones, headphones and wireless transmission systems. In 2011 the family company, which was founded in 1945, achieved a turnover of around 531 million euros. Sennheiser employs more than 2,100 people worldwide, and has manufacturing plants in Germany, Ireland and the USA. The company is represented worldwide by subsidiaries in France, Great Britain, Belgium, the Netherlands, Switzerland and Liechtenstein, Germany, Denmark (Nordic), Russia, Hong Kong, India, Singapore, Japan, China, Canada, Mexico and the USA, as well as by long-term trading partners in many other countries. Also part of the Sennheiser Group are Georg Neumann GmbH, Berlin (studio microphones and monitor loudspeakers), and the joint venture Sennheiser Communications A/S (headsets for PCs, offices and call centres).