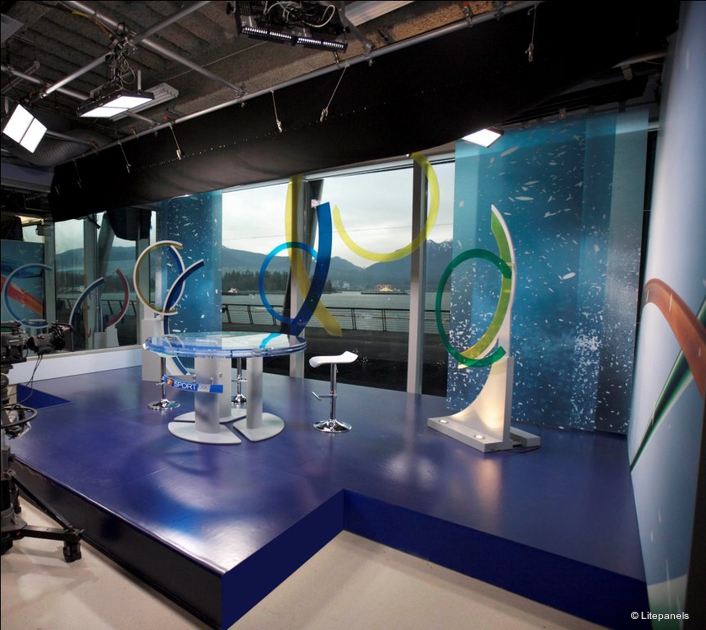 Litepanels lights Sky Italia's Winter Games host announce set
National broadcasters from around the world are at the Winter Games in Vancouver, Canada, for two weeks in February to bring their athletes’ stories to viewers in their home countries. When searching for studio space to anchor their multi-channel coverage, Italian broadcaster Sky Italia found space in an office building with expansive windows looking out on the Canadian city’s skyline.

Litepanels solved the lighting issues in the Vancouver presentation studios

The studio space provided the live background that Sky Italia was looking for, a striking cityscape both day and night--but both rooms were relatively small (7,5 x 7,5 meters and 6 x 6 meters), with 3 meters ceilings. They would be a challenge to light, provide power for and ventilate.

Shortly after the Vancouver studio spaces were chosen, Trans Audio Video s.r.l. Italian distributor for a wide range of Vitec brands, including Litepanels®, went to Sky Italia facilities in Rome and Milan to give demos of the Litepanels LED (light emitting diode) lighting fixtures. During those demonstrations, Sky identified an opportunity, and in partnership with Vitec found that using Litepanels would solve the lighting issues in their Vancouver Winter Games presentation studios. Paul Vickerage, Sky Italia’s Head of Studios explains, “This is a great example of true collaboration between broadcaster and supplier. We have worked together in partnership with Vitec, Litepanels and Trans Audio Video to achieve this solution.”

According to Sergio Brighel, Trans Audio Video technical director, “It was really not practical to use traditional lighting fixtures with those low ceilings. Litepanels LED Bi-Focus fixtures have many unique features, like their ability to vary the beam angle from flood to a 30-degree spot, and dimming from 100 percent to zero, with no noticeable change in color temperature. And, they generate no heat.”

Sky Italia’s technicians were able to find a room similar to the Vancouver studio spaces in their new Milan headquarters. This gave them the opportunity to prove to themselves that the Litepanels focus and dimming capabilities would allow the Bi-Focus fixtures to be placed in an optimal location in the studio, then control the beam to light only the intended space--with just the right intensity. The Sky Italia crew will control both focus and dimming via DMX control with a Strand Lighting MX console.

To allow use of their studios 24/7, Sky Italia installed polarizing sheets to the window behind the presentation desk. This allows them to control the outside light the camera sees by rotating a polarizing filter. Because the background behind the windows is outdoors, Sky Italia chose daylight Litepanels fixtures to color balance with that exterior.

The light provided by the Litepanels fixtures that illuminate the talent and set is not polarized, so rotating the filter on the lens has no effect on the intensity of the indoor scene. However, as the sun goes down, the intensity of Litepanels fixtures placed as backlights can be raised to replace light that would have fallen on the talent’s shoulders through the windows.

The studio will draw a total of 600 Watts

The unpredictable nature of sporting events means that Sky Italia’s reporters can throw to one of the main studios at any point in time. This is handled easily by the Litepanels fixtures, which power up instantly to full intensity, and require no cool down or restrike interval between uses.

Sky Italia’s crews at the Winter Games will also use a Litepanels 1x1 Bi-Focus fixture, operated off a rechargeable battery pack, and Litepanels on-camera MicroPro LED fixture, which operates off six AA batteries, either disposable or rechargeable.