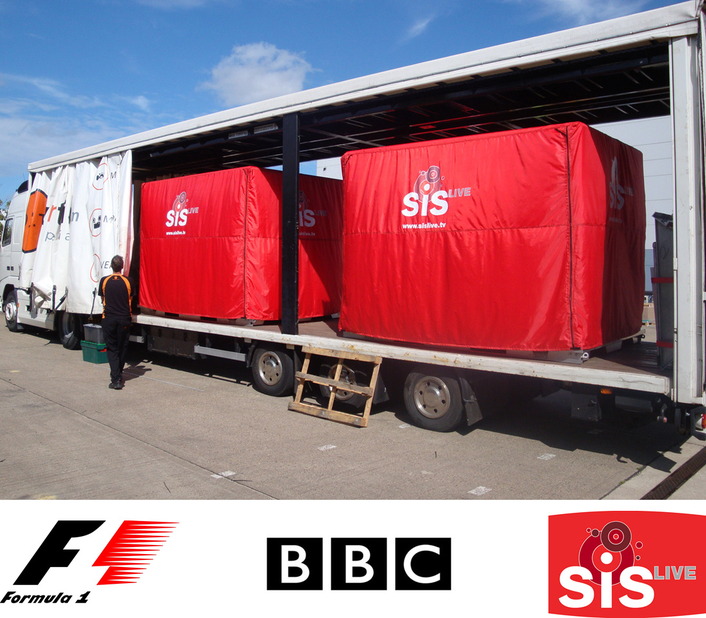 OB and uplink specialist SIS LIVE designs and builds £2m HD flyaway kit and OB truck to capture race-weekend footage
SIS LIVE, one of Europe’s largest outside broadcast (OB) and uplink supplier, has upgraded the technical facilities for BBC Sport’s coverage of Formula 1 motor racing. The UK-based company has designed and built a brand new HD-ready flyaway unit and OB truck to capture BBC Sport’s race-weekend footage for BBC One, BBC Red Button and BBC online. The £2 million system was first used at the Belgian Grand Prix at the Spa-Francorchamps circuit, 27th-29th August, and is heading next to Monza, Italy, for the Grand Premio Santander d’Italia, 10th-12th September.

David Meynell, Managing Director, SIS LIVE, says: “SIS LIVE is always looking to improve its support for BBC Sport’s coverage of Formula 1 and the new flyway kit and OB truck gives the BBC access to the latest HD-ready kit. The £2 million system was fully designed, project managed, integrated and tested by our teams in Milton Keynes. The equipment fits into two easy-to-transport containers that can be taken anywhere in the world to cover Grand Prix. A third container holds the control services for the system. For all the European events, the same control services are fitted in the OB truck, which operates out of the UK. The system offers BBC Sport the greatest flexibility for its F1 coverage on BBC One, BBC Red Button and the web.”

Ian Haynes, SIS LIVE’s engineering manager, Formula 1, says: “When fully rigged, the system provides BBC Sport with a production gallery, VT area, two main edit suites and two smaller edit suites. For long-haul races, the containers can be transported by cargo plane and the control services equipment is set up in a Portacabin in the paddock area of the Grand Prix circuit. In Europe, the same equipment is rigged in our refurbished GPPU (Grand Prix Production Unit) OB vehicle and driven to the circuit for all the weekend’s race coverage. A separate flat-bed truck drives the two containers with the production equipment to make for easy rigging. The system was first used live at the Belgian Grand Prix, where it was a success and everyone was very happy.”

“On qualifying day and race day, we do a live pre-race show on BBC One that runs between 30 minutes and one hour using all our equipment,” Haynes says. “Five minutes before the race, we join FOM coverage, which the BBC comments on, then after the end-of-race press conference, we do BBC analysis, which lasts from 15 minutes to one hour. Then we move from BBC One to the BBC Red Button for another hour of BBC Forum.”

SIS LIVE, which incorporates the former BBC Outside Broadcast division, has nearly 75 years experience of covering major sporting events, and currently provides the facilities and personnel to cover everything from Formula One to Wimbledon to the London Marathon. SIS LIVE is also providing the production and coverage facilities and services to cover the entire 2010 XIX Commonwealth Games in Delhi, this October.

SIS is one of the world’s leading companies in the television broadcasting industry. It is the foremost supplier of television programming and data services to the UK and Ireland betting industry. The company’s broadcast business, SIS LIVE, has the largest satellite uplink fleet in Europe and is the largest outside broadcast provider in the UK. It offers a complete broadcasting solution from onsite outside broadcast facilities through to global distribution and IP provision. The company covers 100,000 hours of live events worldwide each year, including Formula One, The Wimbledon Championships and European Tour Golf, and delivers approximately 80% of live news feeds across the UK.