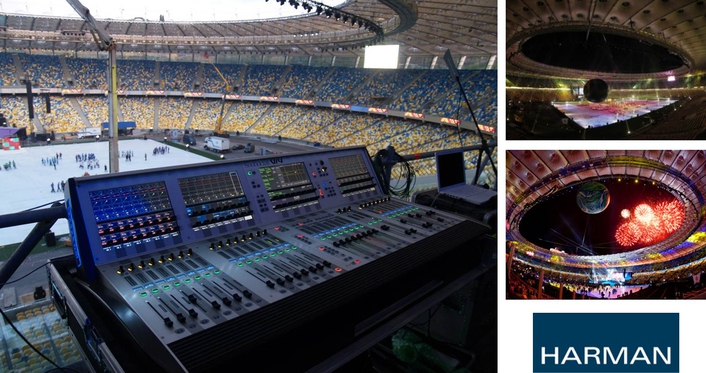 -based Komora provided supplemental sound services for the Olympic Stadium grand opening
On October 8, more than 60,000 participants celebrated the grand opening of Kiev’s Olympic National Sports Complex with a performance by Colombian pop star Shakira and an inauguration speech by Ukraine president Viktor Yanukovych. Also known as Olympic Stadium, the reconstructed Soviet-era stadium will be the site of the Euro 2012 soccer championship final, as well as 2012 UEFA European Football Championship events leading up to the final.

President Yanukovych was joined by many political dignitaries and sports celebrities for the inauguration, along with nearly 2,000 dancers, actors and acrobats who performed in an elaborate theatrical presentation highlighting the nation’s culture and history. Featured performers included Ukrainian artists Ani Lorak, Taisia Povaliy and Gaitana, and the ceremony was capped by a concert by Shakira and a spectacular fireworks display. 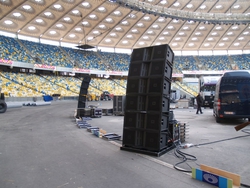 “JBL VerTec line arrays are ideally suited for this type of application where sound needs to be precisely directed, yet cover a large area,” noted Ostapchuk. “We used 24 VT4889 fullsize line array elements set up in four ground-stacked outfill locations to cover the side seating areas of the stadium, and 16 VT4888 midsize line array elements stacked in four arrays to provide clear, powerful sound for the VIP seating areas,” noted Ostapchuk. The VT4889 line arrays were powered by Crown I-Tech Series I-T8000, I-T6000 and I-T4000 amplifiers.

JBL SRX712M 12-inch stage monitors were set up at the podium where president Yanukovych gave his address. JBL VRX Series VRX915M 15-inch stage monitors were used for the performances by Ukrainian singers Ani Lorak, Taisia Povaliy and Gaitana, with SRX725 loudspeakers used as side fills. The pair of Soundcraft Vi4 consoles was used at the front of house position, with one Vi4 used to mix the event’s production audio, and the other for music program mixing.

"Remarkable operational convenience and reliability of Soundcraft Vi digital consoles greatly facilitated our work in preparing and holding this event. The ability to use fiber optic connection for data transmission over long distances make these consoles simply indispensable for events of this scale. The distance we had between the stage and FOH position was more than 450 meters around the perimeter of the stadium, " said Ostapchuk.

“Events like these require a tremendous amount of pre-planning and coordination during the show, especially when so many different people, companies and artists are involved! We were confident the VerTec line arrays would do the job. They are ideal for large-scale, open-stadium events like these because of their high intelligibility, focused coverage pattern and ability to be deployed in a variety of configurations to suit the specific requirements of the venue,” Ostapchuk concluded.