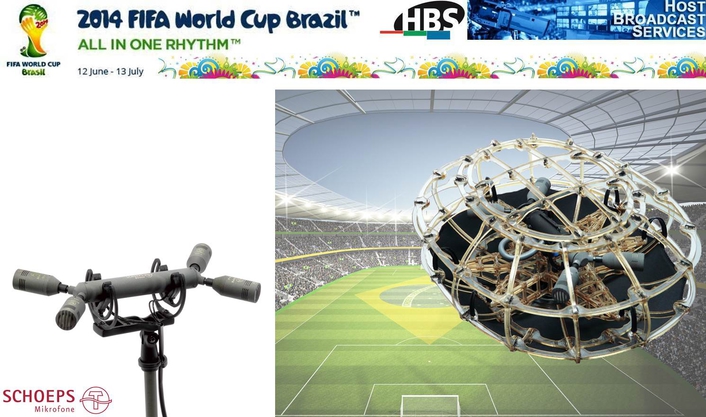 These arrangements meet the demands for high sound quality as well as the practical requirements of the stadium environment. This follows the Schoeps philosophy of microphone techniques that make no compromise where sound quality is concerned; the model in this case is that of professional music recording. The challenge consists in making these techniques work outdoors with compact, simple-to-handle microphone arrangements. A product that is merely small or easy to use cannot be a solution if its sound quality is inferior.

The main surround microphone arrangement in each of the twelve arenas is the SCHOEPS “ORTF Surround” microphone array. It consists of four CCM 41 supercardioids, which are also professional standards in music and cinema sound recording. The ORTF Surround array provides an optimal 360° spatial representation as well as a very “open” spaciousness which lets the listener sense the dimensions of the arena. This is due in part to the 10 – 20 cm spacing between the individual microphones of the array, which deliver a quality of room sound similar to that produced by a classical spaced microphone pair. Schoeps provides further background information on www.schoeps.de/sport .

Despite the spacing between individual microphones in the array, SCHOEPS fits the ORTF Surround setup into one combined windscreen, with a single, four-channel multi-core cable for connections to external equipment. The ORTF Surround setup also has an internal heater in order to handle all eventualities such as steady rain or long-term tropical humidity; the array must hang from the stadium roof for weeks at a time. The ORTF Surround array is further equipped with a newly-developed rain shield.

In each public seating section a Schoeps “ORTF Stereo” Outdoor Set is employed. This compact ORTF setup (in a windscreen) consists of two CCM 4 compact cardioid microphones, and is also connected via multi-core cable. 24 such sets are installed in the Brazil stadiums. Flanking these are 36 individual CCM 4 microphones hanging on cables and fitted with special rain guards.

HBS has worked previously with SCHOEPS in South Africa, because sound quality and both the capability and the willingness for innovation as well as service at the highest professional level is a key to an excellent sound delivery at large scale sport events. HBS has cooperated significantly in the development and further evolution of these products.

During the matches, the main microphones described here are being combined with auxiliary microphones from other companies for the so-called “close-balls” (shotgun microphones at the edge of the field), as well as on some cameras e.g. in the player tunnels. Furthermore, the microphone being used by the broadcast commentator is often a SCHOEPS headset.