Sat.1 is back in the ring

On March 27th, 2010 the German heavyweight hope Steffen Kretschmann faced the Russian Denis Bakhtov at the Hamburg Sports Hall for a PABA championship fight. In addition "ran-boxing" offered additional highlights. A total of 13 fights were on the card. From 18.30 h the undercard fights were streamed live on ran.de. At 22.20 Fight Night was broadcast live on Sat. 1.

Shortly before midnight, the Welsh singer Katherine Jenkins presented the song "Bring Me To Life" before the much anticipated fight - Kretschmann vs. Bakhtov and the boxers entered the ring. It was to be the German’s fight of his life but Kretschmann, who suffered a first round knock out in a previous bout in 2009 with Bakhtov, was defeated again. Although he was leading on points, Kretschmann surprisingly threw in the towel in Round 9 thus losing the fight by TKO. 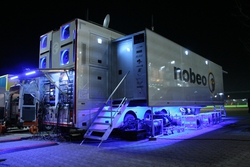 The event was broadcast in HD 5.1 and in SD Stereo as a backup for Sat.1. The undercard fights were transferred in SD Stereo to Munich and from there they were streamed live on ran.de. The World Feed was mixed in a second control room at the nobeo-utility-truck and broadcast in SD. The editing and the commentating for the undercard fights and the ENG-material were carried out in a separate Mobile Editing Unit. The completed material was then transferred from there to the main control room at Sat.1 in Munich. In addition, the highlights package was compiled in nobeo 1’s edit suite.

You can watch replays of that night in Hamburg on