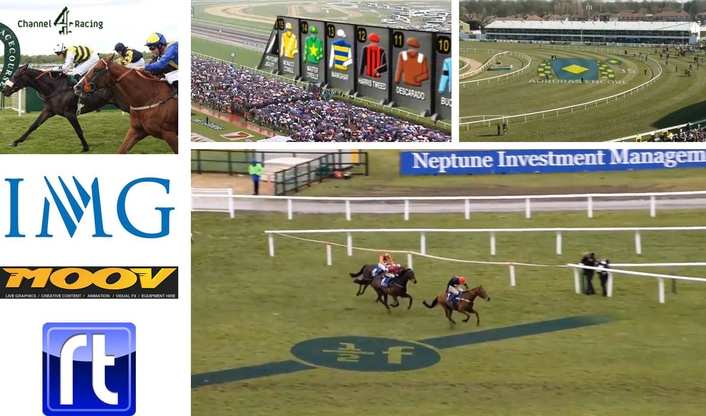 Live virtual distance lines and jockey silks on the turf are all part of the deal
RT Software continues to increase its portfolio of major sporting events using its virtual graphics technology with the addition of dominant UK terrestrial horse racing broadcaster, Channel 4 Racing.

Viewers of the prestigious Cheltenham Gold Cup and Grand National would have seen virtual distance lines and informative virtual graphics appear as though they were painted on the hallowed turf. In reality, this was achieved using a tOG-Sports Live graphics system combined with a Vinten 950i encoded VR head, allowing pan, tilt and zoom movement of the camera. The package allows high quality graphics to be applied to the turf track live and in the correct perspective, plus the tOG Sports software chromakeyer means the horses appear to run over the graphics.

“The challenge with live virtual graphics at horse racing are 2-fold”-commented Mike Fredriksen, Commercial Director at RT Software. “The lens here are typically x72 or larger and the inherent lens distortion causes graphics to move on the ground as the lens goes in tight and comes out, creating a “swimming” effect, shattering the illusion that the graphics are real. W e have a very good procedure for compensating for this, resulting in graphics that are locked in place. Also a good keyer is required – it’s not such a problem here in the UK but in South Africa and Australia the courses can be very dry, meaning you are keying a brown horse on a sandy track. Our software keyer has the sophistication to handle that with good results.”

Jamie Aitchison, Channel Four’s Sports Editor, was full of praise for the new graphics. “The virtual graphics we debuted at the Cheltenham Gold Cup was one of a number of new additions to our programming which looks set to deliver the best viewing experience yet for our audience throughout the rest of the season and beyond.”

The system was supplied by Moov, a UK based graphics services company, who also operate the system at the venues on race days. “Having a system that was quick and easy to rig on race days was critical”  added Duncan Foot, Managing Director of Moov. “We only have a few hours to rig so the fact that the tOG system can be fully operational so swiftly helps take the pressure off”.

About MOOV
MOOV, founded in 2000, has grown to become one of the brightest and most innovative live graphics companies working with leading broadcasters including BBC, Sky, Eurosport , Channel 4 & Al Jazeera. MOOV has covered a number of major sporting events including Summer and Winter Olympic Games, Commonwealth Games, World and European Athletics Championships and FIFA World Cups.

About tOG Sports Live
RT Software’s tOG Sports Live is fast becoming the broadcasters tool of choice for adding live graphics onto playing surfaces at sporting venues. Not just horse racing but also football, rugby, tennis, golf, athletics, water sports – in fact any sport. It works with all major manufacturer’s VR heads, compensates for distortion prevalent in big lenses and has the highest quality software keyer in the industry.

About RT Software
RT Software is a leading provider world wide of real time graphics solutions. The product set spans CG, template driven 2D and 3D graphic overlays, election and news room graphics, specialist sports graphics and virtual studios. From its beginnings as an off shoot of the BBC 3D graphics Department in 2004, it now has installs from Iceland to New Zealand and includes the BBC, Sky Sports, Fox Sports, HBO and many other Tier 1 broadcasters in its growing customer base.