Ross XPression Hits the Beach for the 2011 U.S. Open of Surfing 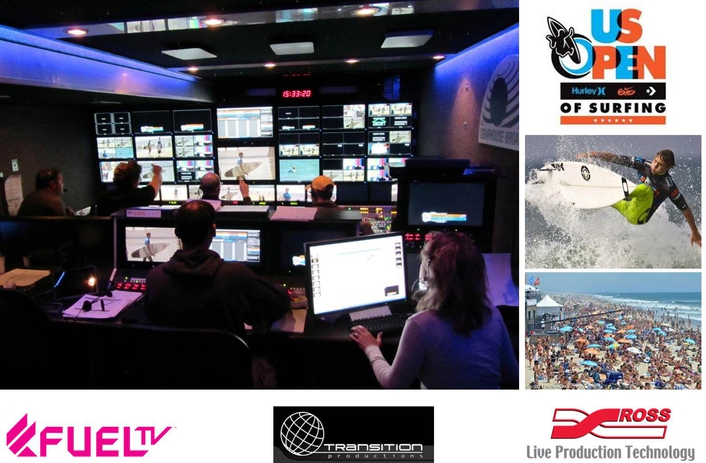 A key requirement for XPression was the ability to interface to live scoring data for over 70 hours of surf competition
The Ross XPression 2D/3D CG and Motion Graphics System was tapped to provide live graphics for coverage of the 2011 Nike U.S. Open of Surfing from Huntington Beach, CA, August 1-7. Produced by Transition Productions and carried on Fuel TV in the U.S., Australia, Brazil, and Europe, as well as streamed internationally on the web, the U.S. Open is the world’s largest professional surfing competition with over 700,000 attendees. Other events during the week-long event included skateboarding and BMX competitions, music concerts, and a fashion show.

A key requirement for XPression was the ability to interface to live scoring data for over 70 hours of surf competition, for ten hours continuously at a time, provided by ASP sanctioned scorekeepers, BeachBytes, in addition to being operated manually. XPression allows an unlimited number of control points, so while some graphics were being called to air as part of the data interface, the operator could manually call graphics to another channel, or even to other layers on the same output. For non-interfaced events, links were created to Excel spread sheets for quick entry of results.

"The industry-wide buzz about XPression and its recent success on Hollywood's highest-profile award shows and top-rated reality programs was very intriguing to us," said Jeff Wilkov, Creative Consultant and Graphics Producer for the U.S. Open of Surfing. "But would XPression really be nimble enough for the unscripted drama and live urgency of broadcasting surfing’s biggest contest? With the support of Ross Video behind it, XPression upped the ante with an intuitive, user-friendly GUI that has no equal. XPression allowed us to work smarter while increasing our overall efficiency in an extremely fast-paced environment, across 3 venues. Ross Video has delivered the next generation killer-app for character generators and consequently, action sports graphics for TV and the web will never be the same."

“Most people think that a surfing gig would be a laid back job, but from a production perspective, it’s actually quite fast-paced,” said Melinda Gray, main graphics operator for the U.S. Open. “And frankly, in the past it’s been hard to keep up at times. XPression has changed all that. The interface provided real-time scoring and allowed me to keep my head in the show, instead of buried in the stats. XPression was so logical and intuitive that I was designing and animating graphics in two days. Add to all that a level of service from Ross never seen before in this industry, and you have a powerful and elegant system that is poised to take the broadcast graphics world by storm.”

“While XPression is already used for sports in other parts of the world, as well as many stadiums and arenas, it’s not as well known in the U.S. sports production community,” said Brian Olson, Marketing Product Manager for XPression. “The U.S. Open was a good opportunity for us to show what XPression can do on a large-scale event. We look forward to expanding our presence in the sports market by giving operators an easy-to-use platform that supports both 2D and 3D workflows with easy connections to live data.”