Robe Dances with the Stars in the USA 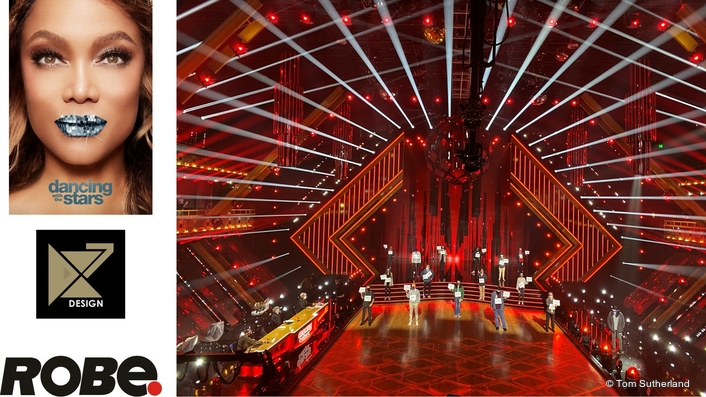 It is being broadcast until the end of November from CBS Television City, West Hollywood, California.

The 29th series of the popular TV dance competition “Dancing With The Stars” (DWTS) returned to ABC this month with new host Tyra Banks and 178 x Robe MegaPointes on the lighting plot as part of lighting designer Tom Sutherland’s precision-crafted epic look for the first series performed without a live audience!  Tom’s company DX7 Design was initially asked to develop lighting for the 2019 season by executive producer Andrew Llinares. He, Tom, and director Phil Heyes – who has been on DWTS USA for 5 years – have also all previously worked together including a while back on X-Factor in the UK.

Tom, who also lights a variety of top music artists, is known for his skillful blending of two very different lighting aesthetics; the drama and thrill of pop and rock with the detail and discipline needed for slick TV lighting. For this, he and DWTS creative director Justin Mabardi discussed several tasks and challenges for lighting including harmoniously working with the numerous digital set elements, and, most importantly, helping recreate the impression of a live audience!

The set – including the extensive video elements like a giant LED panel chandelier filled with lights – was designed by Florian Wieder. Tom enjoys working with Florian because of the latter’s great eye for how lighting can be integrated into set architecture, as was the case for this production with a series of scenic girders running the length of the performance space which were specifically designed to incorporate lights.

This is where a quote of the 168 MegaPointes were rigged.

Felix Lighting also supplied 16 Robe BMFL WashBeams to the show plus four BMFL Blades which are running with four separate RoboSpot base station systems for remote operation. Additional Robe products are brought in weekly as extras for specific routines, joining around 900 lighting fixtures being utilized by Tom in total, all supplied by Felix Lighting.

The absence of a live audience threw up the massive challenge of filling the studio space and evoking the vibrancy and atmosphere of having real people there, a goal that is being achieved with additional lighting and screen elements. 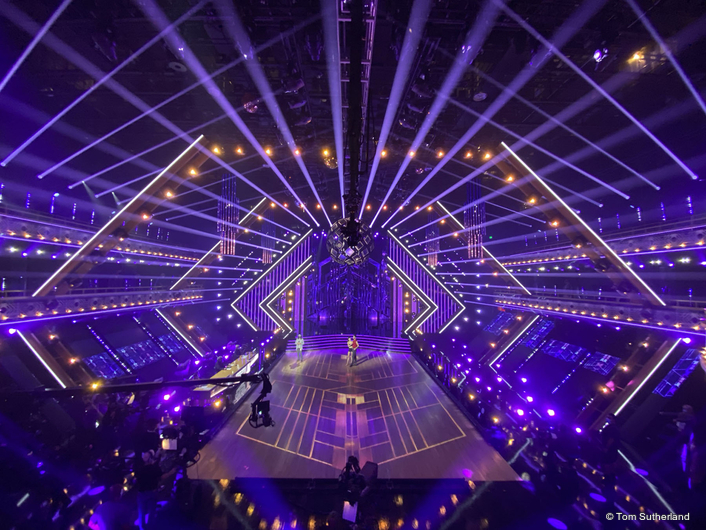 As well as recreating this essential ‘buzz’ in the air, the production is also delivering all the color, razzmatazz, and WOW factors to accompany the chemistry and choreography of the dancefloor action.

A large upstage video wall tracks open / closed for host entrances and exits, while a large LED PAR can wall behind it is a nod to classic dance hall style. Downstage of this are some art deco scenic towers which also track on and offstage.

An angled LED pros arch is flanked left and right by slanting video screens covering some of the audience seating, and their shape is mirrored lengthways along the dancefloor by the pairs of angled scenic beams – all with MegaPointes rigged to the undersides.

“MegaPointes are the workhorse fixture of the show,” stated Tom who chose them because he needed a dynamic multi-purpose fixture able to deliver a wide and almost endless range of effects needed throughout the series, in which the creative team can imagine over 150 different signature looks for different dance routines, each of which has to be beautiful, appropriate and distinctive.

More MegaPointes are sitting in rows at audience head level along two tiers of balcony rails (for upper and lower levels), with the remainder of the fixtures lined up around the edge of the dancefloor.

This layered positioning and the scenic / lighting elements can also assist in forming more intimate looking spaces on camera, so viewers catching the show on TV barely notice that a live audience is absent! 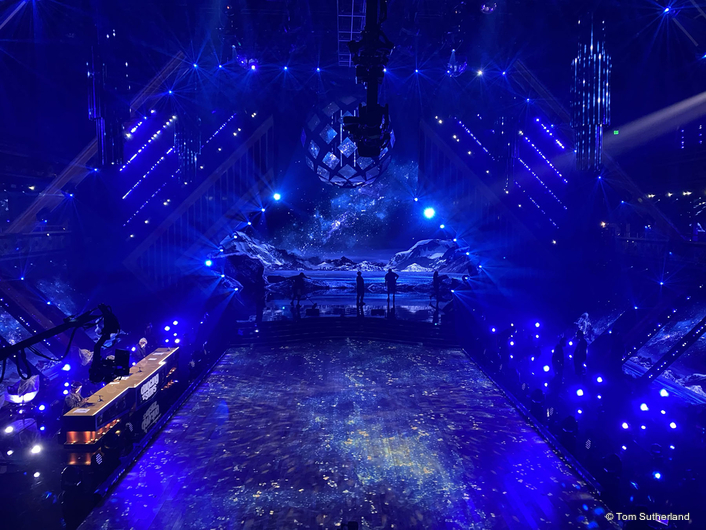 The MegaPointes create those big elegant, structural looks that they are so good at throughout the show, and while nothing can quite replicate the aura of fans enrapt in the performances, this multi-level, carefully thought-through and applied optical ‘magic’ works very well.

“The audience is such a fundamental part of the show,” says Tom, admitting that he was nervous to start with, and “delighted” that all the extra lighting “has had the desired impact.”

The BMFL WashBeams are rigged on two vertical towers left and right of the pros arch, ideally placed for assisting in closing the set down for more intimate and dramatic moments. Tom needed a light source that was “Bright, powerful and versatile” to fill these back-of-camera shots.

The four RoboSpot controlled BMFL Blades are positioned in the four corners of the dancefloor.

They are proving great for adding background effects and gobos on the dancers, especially during 360-degree Steadicam shots. “It’s much easier using this system to highlight performers with color, a texture or an effect as needed,” Tom comments, adding that while RoboSpots are on the spec for most of his shows, on this one he’s really been able to get imaginative with them!

At the control platform, he also has a feed of all the RoboSpot cameras and can keep an eye on exactly where the operators are pointing to ensure they are on target every time.

Tom is working alongside a talented DX7 Design team comprising lighting programmers Joe Holdman and Nate Files, and they are using a grandMA control system, and Hunter Selby is his assistant LD. 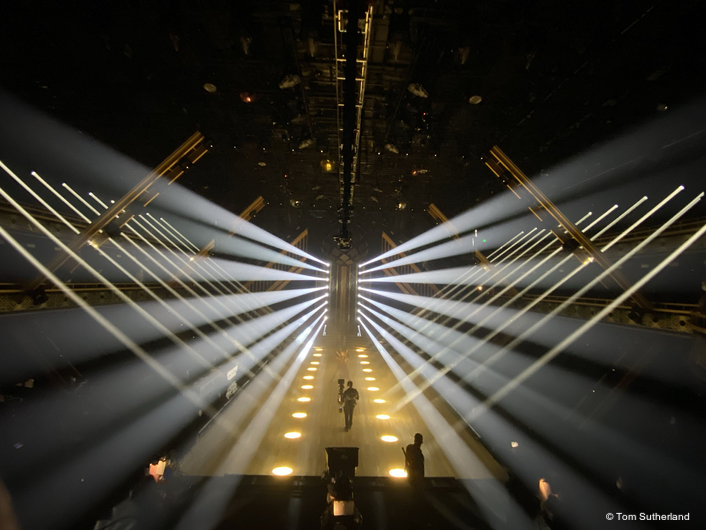 The lighting gaffer is AJ Taylor, best boy is Danny Vincent, the Felix lighting techs are James Coldicott & Dominic Adame and the account manager at Felix is Nicole Barnes.

Working in a Covid-safe environment has been a galvanizing experience for everyone.

The crew are all tested weekly and the studio has been zoned so artists, crew, celebrities and other staff ‘bubbles’ all utilize separate green rooms, eating areas, bathrooms, entrances and exits, etc., and can avoid mixing. Masks are worn at all times and they also rigorously social distance.

Show schedules are planned so that large set changes – where normally 40 odd stagehands would ‘whoosh’ onto the dancefloor simultaneously to complete a major set / props changeover in a couple of minutes – are not necessary to limit physical proximity and the need to get close to one another!

As with every production that is active and working right now, all involved in “Dancing With The Stars” – production, crew, creatives, and artists – are extremely happy to have the opportunity of being back doing what they love, even if it’s under very altered circumstances.

Says Tom, “It’s great to be back in the studio working with the crew again. Thanks to all the production team for their tireless efforts over the past few months on ensuring we are back safely creating a show we love!”

Nicole Barnes from Felix Lighting comments, "We at Felix are blessed to be asked to work with Tom and his team again on DWTS. It has been an honor to support and execute such relevant, fresh designs, especially for such a crucial season. Everything on Tom's lighting plots translates so well through the directed magic of the camera lens. 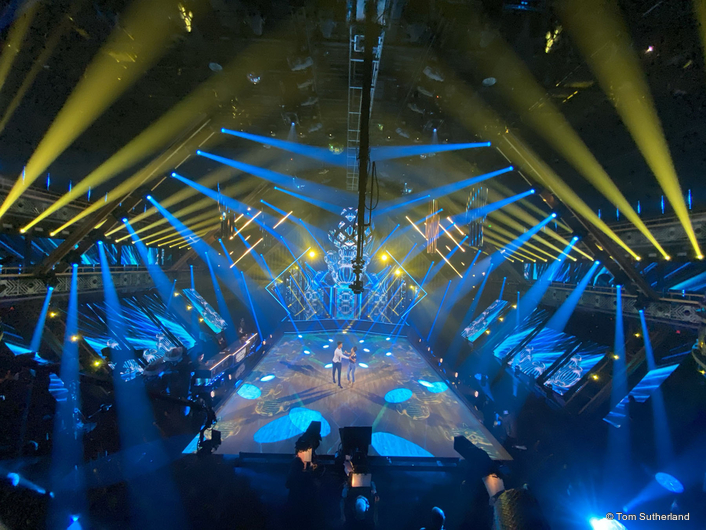 With the mandatory elimination of a studio audience, there probably was some risk to the effectiveness of the show. Tom's lighting design, along with very thoughtful scenic and video elements, have captured and preserved that fantastic DWTS excitement and not missed a dance step.

Witnessing these shows air, we all remain ‘cautiously optimistic’ about the future of broadcast, production, and live events. All the amazing people who work behind the scenes just want a chance to return to work quickly and safely.

We see DWTS as a beacon of hope, bringing us back one cha-cha, foxtrot, and tango at a time!”