The massively popular event, produced by Old School Productions, was staged in the round and lit by Sean Caie, the venue’s Head of Lighting, using an all Robe moving light rig including BMFL Spots.

The floor layout comprised a complete skate / BMX Park, with vert ramps and all the death-defying obstacles you’d expect in this raw and uncompromising environment. 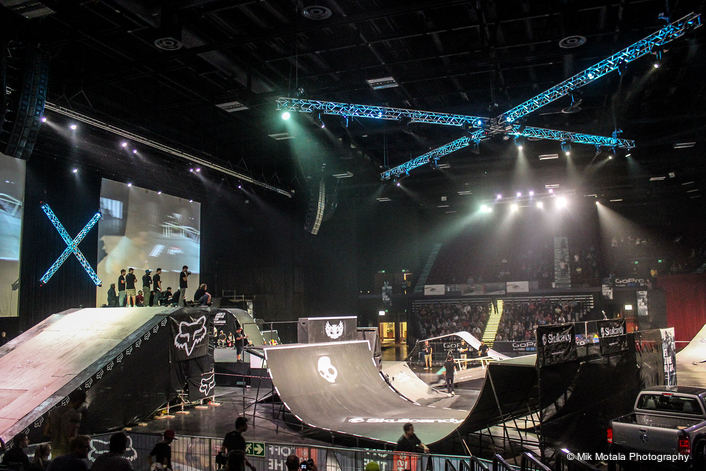 This made lighting a major challenge from many perspectives. The cameras – doing IMAG relay to screens, the audience and of course, the competitors themselves all needed sufficient light in the right places to be able to judge the distances, heights, angles and gradients of the obstacles.

Good even lighting across the entire space was a crucial requirement and as Sean explains, this was a lot “Easier said than done!”

The only brief that Sean received in relation to lighting involved creating an X of some sort to tie in with the general theme, which was achieved using some imaginative trussing traversing the competition space. The pressure was on for this show as the lighting had to provide additional elements of theatre to an already highly dramatic situation, as well as serve a very functional and practice purpose. 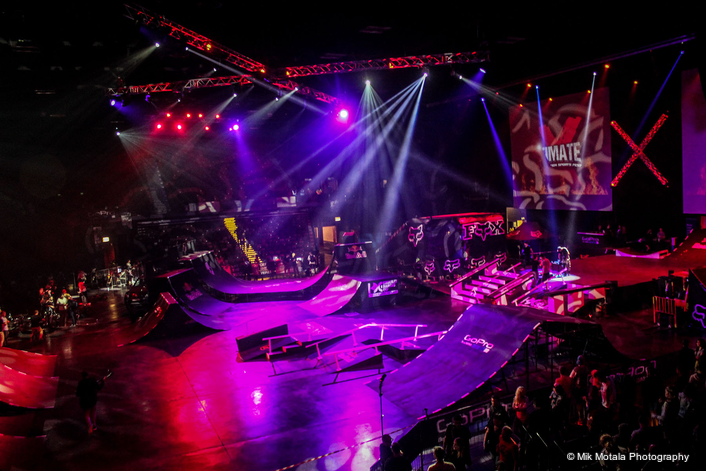 He used a combination of 42 x Robe moving lights. This included four BMFL Spots and Four miniPointes which were on trial from DWR, plus 12 x ColorSpot 700E ATs, 12 x ColorWash 700E ATs, six LEDWash 600s and four Pointes, which are all part of the house system at the Grand Arena.

The BMFLs were positioned on the edges of the main rig as their powerful beams could easily deal with the extreme throw distances and the 10 metre trim height. They covered enormous areas with their “incredible” output, and Sean was able to produce  “Monstrous” gobo effects to cover a whole 12 x 9 metre screen – part of the IMAG relay – when that was  not in use for camera footage.

He used the BMFL Spots to light the FMX kicker (launch ramps) and the critical mid-air space where the contestants needed to be fully visible for the camera relays. He kept the multiple camera and contestant angles in mind at all times, together with ensuring that the riders could see where they were going, flipping and landing. 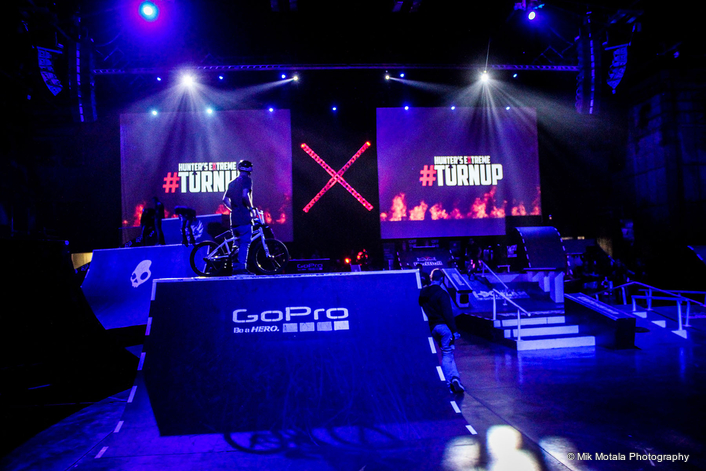 The four Pointes were positioned on the downstage fly bar over the FMX area and used for beamwork and as back light for commentators.

The ColorSpot 700E ATs were rigged on the main X truss and filled and textured the vast floor area, and occasionally they were used for beam effects, while the ColorWash 700E ATs on the outer trusses provided efficient floor area and audience coverage as well as basic side and front lighting.

The LEDWash 600s were on the four ends of the X truss and used for cross lighting and colour washing the space.The miniPointes were also on ends of the X truss, where they were used for texturing and worked hard to keep up with their full size counterparts! They provided key lighting to several locations on the set and added to the general beam and audience looks.

In addition to all the Robe moving lights, there was a quantity of LED PARs on the rig, all of which Sean programmed and ran using a grandMA2 light console.

It was the first time that he had used BMFL Spots which he liked enormously, although he only had the time to “Barely scratch the surface” in terms of what they can achieve. He hopes to get the chance very soon to use Robe’s new signature multi-functional luminaire on a music show. 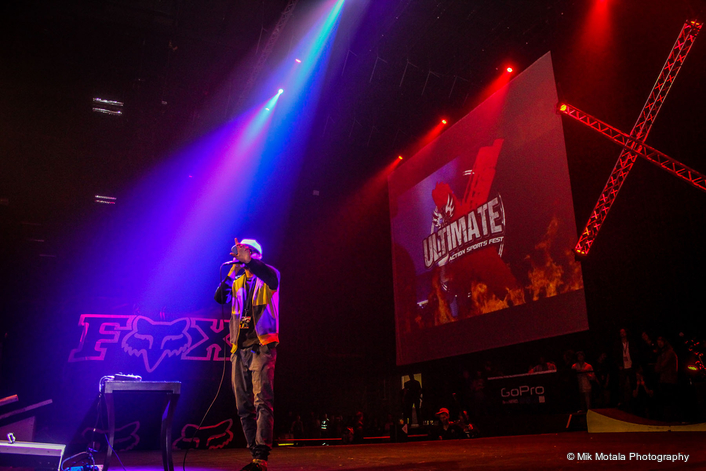 It was also a first for him with miniPointes. They are a “Fantastic addition” to any lighting plot he stated, so lightweight and compact in size that they can easily be double and triple stacked or otherwise clustered together. “Ballsy little fixtures that are welcome in my house any day,” was his conclusion on the miniPointe!

One of the biggest technical challenges of the event included having to do an accurate pre-focus because once all the ramps were positioned, a large proportion of the rig was inaccessible. Another was the six hour get-out window to strip the entire production out and leave it bare for the incoming music act!

The goal was achieved thanks to some great teamwork by the GrandWest technical crew. Working alongside Sean were Dave Lombard (the Venue’s Technical Co-ordinator), Nasser Achmat (Resident Audio H.O.D), Lucien Meyer (Lighting Technical Assistant), Marc Kirby (Audio Technical Assistant) and Entertainment Manager Gavin Taylor. Their considerable aggregate talents and skills all helped ensure a great looking and sounding streamlined production to the best quality standards that was enthusiastically enjoyed by capacity audiences. The video production – IMAG and projection - was supplied by Enterstage.

Sean has been using Robe lights for some time, in fact from when he first started work for Sun International, owners of the GrandWest Casino complex, 12 years ago, running the 160 seat Roxy Revue Bar. He’s been really happy with the brand.

“Robe is a perfect balance between cost-efficiency and reliability – the products are excellent!”

He also has many good words to say about DWR, Robe’s popular and hard-working South African distributor that “Has absolute dedication to their clients … and always deliver with a smile”.