Riedel’s Artist digital matrix intercom and Bolero wireless intercom are at the core of a comprehensive event communications solution for the all-new International Swimming League (ISL). The integrated Artist/Bolero system enabled clear and highly reliable crew communications for the ISL’s inaugural season in 2019, culminating in December’s Grand Final at the Mandalay Bay Resort and Casino in Las Vegas.

The ISL has brought swimming to the world of professional sports, with male and female swimmers competing in teams rather than individually. Throughout 2019, the league conducted seven short-course swimming matches in cities around the world, with Energy Standard of France winning the first-ever ISL Championship at the Grand Final.

Dodd Technologies Inc. (DTI), a full-service event and entertainment production company, produced the four U.S.-based meets for broadcast and streaming outlets. These included events in Indianapolis; Washington, D.C.; Dallas; and the Grand Final in Las Vegas, for which DTI worked with Myrtha Pools and Klance Unlimited to install a custom-built, acrylic-sided pool, holding nearly one million gallons of water, in the Mandalay Bay Casino Arena.

For each of these events, the DTI production team relied on an Artist-32 mainframe interfaced with desktop and rack-mounted Riedel 2300-Series SmartPanels, which routed intercom signals seamlessly to 10 Bolero intercom beltpacks. At Mandalay Bay, only two Bolero antennas were needed to provide flawless and crystal-clear communications to the entire arena and surrounding rooms. 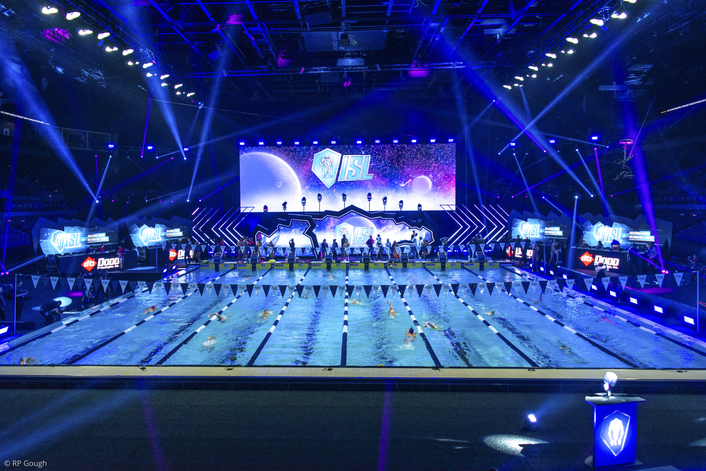 “Each ISL event is an extremely high-paced production that demands fast and foolproof crew communications. We’re also under an intense time crunch, and we can’t waste minutes troubleshooting or worrying about coverage,” said Caleb Cassler, Audio Engineer, DTI. “The flexibility of the Artist ecosystem, combined with the easy setup and ironclad reliability of the Bolero wireless intercom, are exactly what our production team members need to keep the show running smoothly. And in Las Vegas, I was really impressed that only two Bolero antennas were able to cover a huge area with ease.”

At each ISL event, Bolero was used extensively to keep individuals informed and overall comms chatter to a minimum for functions such as athlete locating, roster changes, and control of wireless cameras. The DTI team was able to allocate a Bolero channel for each of six departments — audio, video, show lighting, LED walls, truck engineering, and truck director — and make changes easily and on the fly using the Riedel Director configuration software. In one example, decisions regarding which swimmer would swim in each event are made right up until the race itself. A stage manager with a Bolero beltpack would visit each coach for the last-minute changes and instantly relay these changes to graphics, timing, and scoring personnel, as well as producers for appropriate announcements.

“The ISL is a groundbreaking organization in the world of competitive swimming, and one we’re very happy to be associated with,” said Joyce Bente, President and CEO, Riedel North America. “Not only is there an exciting new professional sport with its own large base of dedicated fans, but the ISL is doing it right by putting the focus on teams rather than individuals.” 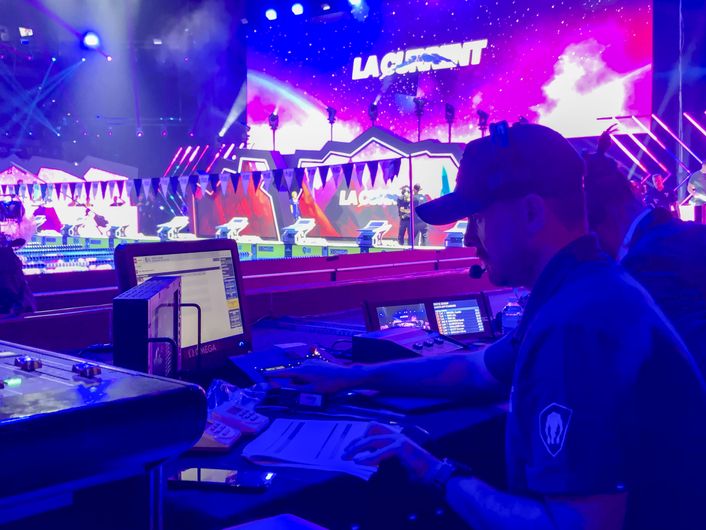 Bente added, “For a brand-new sports entity with lots of room to grow, an Artist-Bolero comms ecosystem is an excellent choice. Bolero lets the production expand or shrink to any size depending on the show, working in stand-alone configuration or as part of an integrated Artist system. Likewise, Artist adapts easily to changes in the production and scales to meet increasing show demands, and it’s agile enough to handle new formats as content creators look to engage new audiences in different ways.”

Dodd Technologies, Inc. (DTI) creates exciting concepts, produces effective media, and stages world-class events, meetings, and entertainment across North America and internationally. Thanks to one of the most extensive inventories of staging, lighting, truss, audio, and video equipment in the business, as well as our industry-leading, customer service-focused technician and production teams, DTI delivers unsurpassed value to our customers.

The International Swimming League is a global professional swimming competition that launched in 2019 with teams in both Europe (Italy-based Aqua Centurions, France-based Energy Standard, Hungary-based Iron, and London Roar) and the United States (Cali Condors, DC Trident, LA Current, NY Breakers). The inaugural season included matches in Indianapolis IN, Naples ITA, Lewisville TX, Budapest HUN, College Park MD, London GBR, and the championship finale at the Mandalay Bay Events Center in Las Vegas, NV. The second season will feature 2 new clubs and 27 matches running from September 2020 to April 2021 with a regular season, playoffs and Grand Final. The ISL aims to create ground-breaking projects, in both form and content, exploring the full potential of competitive swimming while securing sustainable commercial growth in the sport.