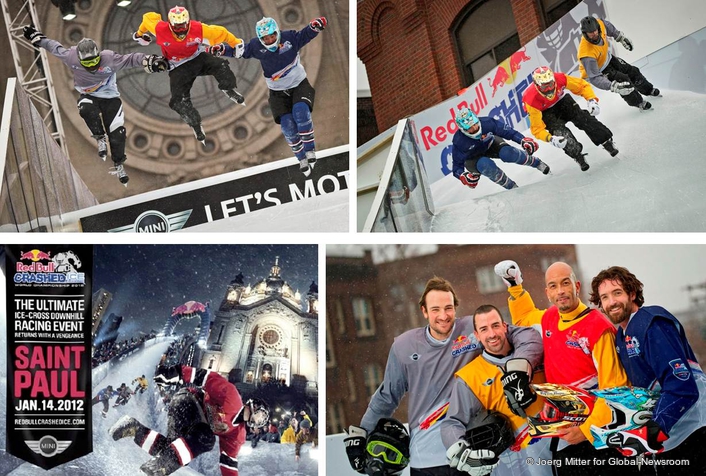 Hot Iron at Ice Cross Downhill World Championship
The combination of speedskating, boardercross and downhill skiing has only been around for 10 years but Ice Cross Downhill has already overtaken numerous other established sports: there are participants from 30 nations, up to 15,000 (!) athletes, who packed into the pre-qualifying in Canada, venues around the world that are bursting at the seams with spectators and enthusiastic media coverage.

The rules are simple: Four athletes line up at the start and the first across the finish line wins. Speed, agility, perserverance, toughness and courage at speeds of up to 60 km/h are the ingredients needed for success.

After the first official ice cross downhill world championship in 2010 with races in Munich (GER) and Quebec (CAN), where the skaters battled it out shoulder-to-shoulder before Germany’s Martin Niefecker claimed the inaugural title, there were four races in 2011 around the world.

There were more than a total of 170,000 spectators watching those four races in frosty temperatures in Munich (GER), Valkenburg (NED), Moscow (RUS) and Quebec (CAN).  The first race ever was in Stockholm (SWE) in 2001 and there have been 20 races since. The defending champion is Arttu Pilhainen of Finland.

World championship points are up for grabs at each of the four stops of the Red Bull Crashed Ice World Championship: the winner collects 1,000 points and competitors all the way down to 100th (0.5 point) can collect valuable points. Whoever finishes the season with the most points after races in Saint Paul, (Minnesota, USA), Valkenburg (NED), Aare (SWE) and Quebec (CAN) will be crowned the 2012 Red Bull Crashed Ice World Champion. Sweden’s Jasper Felder is the most winningest athlete of all time with six consecutive race victories – a record that could last for eternity.