The Quest for Gold: Southeast Asian Games Go with grandMA2 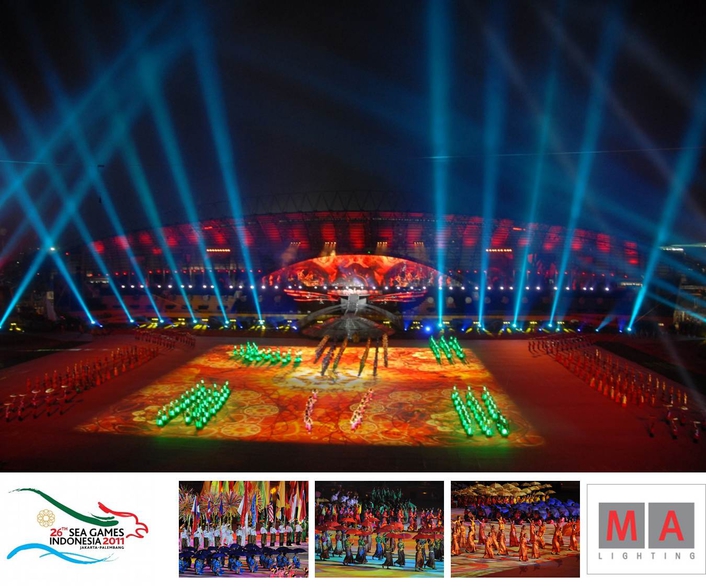 The two grandMA2 full-size consoles, a grandMA2 light plus two MA NPUs (Network Processing Units) were provided by Mata Elang
The Southeast Asian Games is a series of sporting events held since 1959 every 2 years almost without fail. The key objective is to boost the cooperation and understanding between the countries forming the South East Asian region by promoting sports and healthy competition in particular amongst young people.

Hosting the SEA Games for an unprecedented 4th time since its inauguration in Bangkok, Indonesia had high ambitions to once again be a perfect host and claim the trophy of being the most successful participating country. Careful planning went into choosing Jakarta and Palembang as host cities.

Planning for the Opening Ceremony started many months in advance. Lighting consultant Bernard Chew chose grandMA2 consoles for lighting control because he knew of the size and importance of the show. Using grandMA2 onPC and grandMA 3D to plan and visualise the event, he was able to conceptualize the show and make necessary suggestions.

For him the support of MA Lighting was key. Although  a lighting programmer for more than 20 years, this was his first intensive encounter with an MA system. However it proved solid and intuitive, giving him plenty of confidence, and ultimately it was the support that convinced him to choose MA.

“MA provided us with the fixture library in an instant, and this kind of help was absolutely crucial to us!” confirms Chew. That is why he also wholeheartedly recommended the consoles to Mr. Hendra Lie, the owner of rental company Mata Elang and the undisputed “King of Stage Lighting” in Indonesia.

The Organizing Committee also brought in Paul Collison from Australia (well known and respected for his work on the Beijing Olympics, the Shanghai World Expo Opening, X-Factor Australia, the Opening Ceremony of the 2011 Rugby World Cup and Singapore's National Day Parade to name a few). Collison was acting as a lighting supervisor whilst also helping the programmers working on the three grandMA2 consoles. “I was very impressed at the ability of the three programmers to change their ‘single cue per fader’ mentality and really grasp the tracking cue list abilities of the grandMA2 system" he states. "Timecode was an added complication, however by the end, they saw the benefits of a sensible tracking sequence all cued to a single Timecode show. It certainly made a huge difference to the quality of the final show”, states Collison.

Mata Elang is the largest rental company in Indonesia and also provided over 1000 lighting fixtures, ranging from LED wash lights to moving lights to search lights as well as several large scale video screens. The fixtures were split into three 'worlds' to enable the three programmers to work independently on their own range of lights, the results of which were merged into one showfile running on Timecode. The added benefit was that if one console had failed, the system had fully redundant backup. The show only used less than ¾ of the actual capacity of the system, and the MA NPU workload never exceeded 8%, showing its exceptional capabilities.

The system had 34 DMX outputs available straight from the factory, but the team decided to run a few universes over ArtNet as well, allowing these outputs to  also benefit from the automatic fallover protection of the consoles.

Says Hadi Suroso (Lighting Designer and main Operator), “The show was a great challenge for us as we had only just started learning the consoles. We were lucky to have Paul Collison there to teach us and the show turned out very well. I have to thank a lot of people involved with the SEA Games, particularly show director Mr. Indra Yudhistira, Paul Collison as our mentor, Bernard Chew, both the Kompas TV and the Mata Elang crews ... and most of all, my partners working on the consoles - Juni Purwanto and Dedy”.