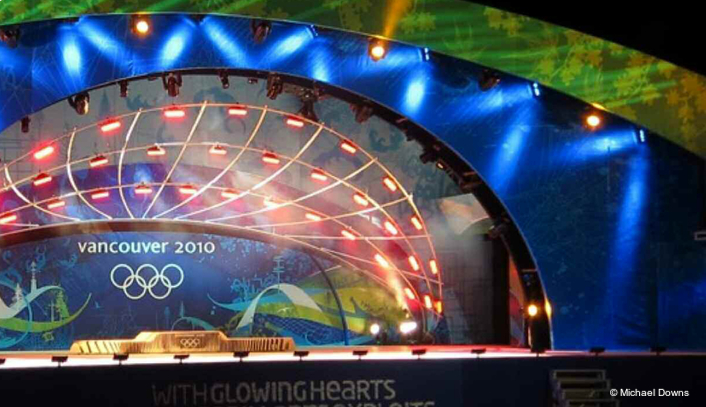 Whistler Ceremonies Plaza 2010 Winter Olympics
The Challenge: Engineer an audio system that is concealed in the stage and scenery while still providing exceptional sound quality for both live and broadcast audiences.

Gail Seay, executive producer of the Whistler Ceremonies Plaza (WCP) at the 2010 Olympic and Paralympic Winter Games, and lead designer Michael Downs created a unique live and broadcast environment for the nightly medals and concert celebrations at Whistler Village during the 2010 Winter Games. An outdoor amphitheatre-style venue was constructed specifically for this location, which allowed Downs to design without existing structure constraints.

A requirement of Downs’ design was that the audio equipment had to be concealed within the stage and scenic elements. Although audio is notoriously difficult to hide, particularly in an outdoor concert venue, PRG engineered a system that realized that design intent. “They worked hard to find solutions to conceal the audio,” explained Downs. “They helped specify things like the audio mesh and suggested other ways I could conceal things even further.”

The WCP’s unique shape, wider than it is deep, was a significant consideration in the system design. PRG used the L’AcousticsV-DOSC line array cabinets as the primary arrays, left and right of the stage; L’Acoustics Arcs were incorporated into the structure, disguising their presence while affording front and out fill coverage. PRG also utilized the L’Acoustics dV-DOSC line array cabinets for the two delay lines hanging from the rear of the four-story front-of-house compound. Three DigiDesign Venue Profile consoles, chosen for their flexibility, were used by the PRG audio engineers and by the touring engineers.

No less a priority for PRG was the flexibility and utility needed to provide an integrated broadcast feed for the billions of viewers each evening. The processing and control architecture required a sophisticated playback solution, utilizing networked computers to store and playback tracks for the ceremony. The playback solution allowed stereo feeds to the live audience and mixes to the international broadcast. The final result was a sound system that provided exceptional, consistent sound coverage throughout WCP while remaining invisible to the world. Downs, pleased with the results, said, “PRG was really great; having people that are as dedicated to the look and feel of the design was very, very good.”