The Future Group provided six installations of its virtual production platform, Pixotope, along with essential technical expertise to liaise with all other aspects of the multi-faceted production. 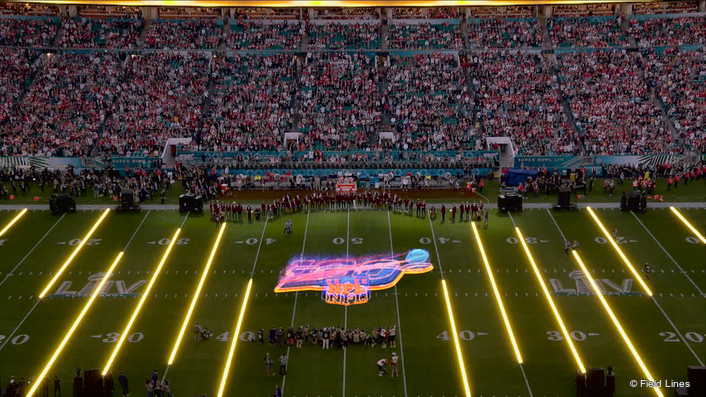 As an opener to the Super Bowl LIV, NFL planned to reveal its “100 All Time Team”. They approached fan experience company– coincidently named, The Famous Group – to design and choreograph the pre-show content. The brief was to celebrate the history of the sport and the contribution of those 100 players and 10 coaches, using graphics, historical film and live shots of attendees. The Famous Group looked to achieve this through extensive use of mixed reality virtual elements, and selected Pixotope, with expertise from The Future Group, as their technological solution. 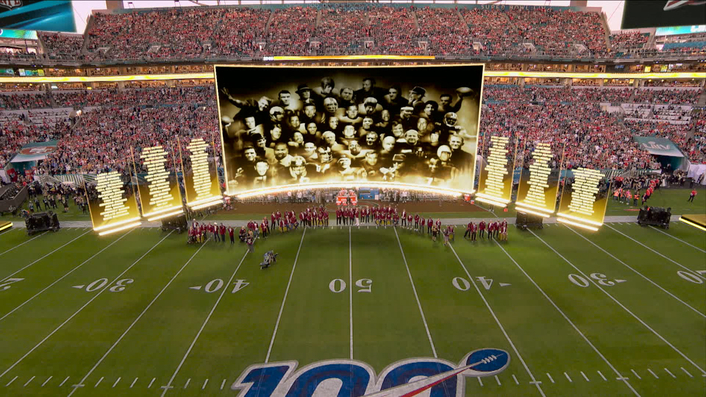 The complexities of such a project cannot be overstated. Multiple virtual assets such as stages and screens needed to be designed to exactly match the stadium environment to which they would be augmented. Cameras needed to be tracked in real time and have their lenses aligned so that the virtual elements would be generated at precisely the right angle to accurately match real-world positions. Lighting needed to be measured so that it could be simulated in the virtual world to ensure correct shadows and highlights.

In-stadium screens, which would show the augmented content to the crowd, had to be accurately marked out in the virtual scene so that they could be blocked out to avoid visual “feedback”. All this had to take place under precise time control to synchronise with the voice-over and contributing performers in the stadium.

Pixotope product specialist, David Stroud, was part of a team of experienced mixed reality technicians, helping to specify and install the required technology, and bring together all the constituent departments. The Future Group team were involved from the outset, initially collaborating using a shared virtual project to provide technical assistance for The Famous Group creatives. Then later, the team positioned themselves at the Hard Rock Stadium, Miami FL, where the main event would take place 11 days later.

David Stroud recalled, “Although the virtual scene had been set up “offline” from scans and measurements from the stadium, there are inevitably adjustments that can only be done on site. We used our Pixotope virtual production platform to receive images and tracking data from each of the cameras, one of which was a Skycam “wire-camera”, and augment onto those the virtual elements designed by The Famous Group. This allowed everyone to see the results in real time, making adjustments and improvements as we rehearsed the show in the days leading up to the Super Bowl.”

Stroud continued, “We helped the camera operators visualise how the preshow would come together, as understandably, they were more used to following the unscripted action of a football game than reacting to very specific time cues. Pixotope has the capability to continuously output the final result, even while editing the graphics – a great tool for directors following rapid changes and updates because it’s always live. 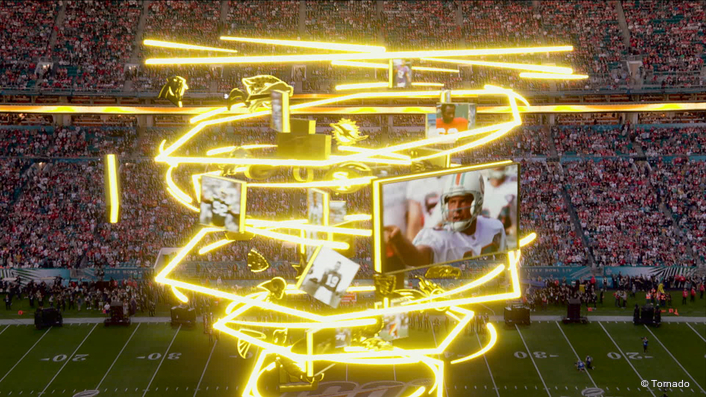 “We also worked closely with camera tracking specialists SMT, and in fact, we were able to improve our data exchanges to further perfect the virtual camera motion. And we worked with both the broadcaster (Fox) and the companies providing in-stadium displays to ensure the very highest visual quality possible.”

Andrew Isaacson, Executive VP Business Development for creative agency The Famous Group affirms, “Needless to say, the best creative ideas rely on solid technological platforms and expertise to deliver them. This could not be truer for a live event on the scale of The Super Bowl. We needed to know, without any shadow of a doubt, that what we planned would be delivered faultlessly, accurately and to the highest quality. This is why we chose Pixotope as our platform for delivering cutting edge mixed reality for the Super Bowl.

“Having used Pixotope on previous productions, we know that the system, and expertise from The Future Group, allow our creative ideas to be unleashed to the great benefit of our clients like the NFL. We look forward to working on many more productions with Pixotope.”

All hardware was provided by Quince Imaging and camera tracking was completed by SMT. The final mixed reality sequence can be viewed online, here: https://www.youtube.com/watch?v=FqXBKweKQ9U

About The Future Group
Pixotope™ is the world’s leading solution for live mixed reality media production. Pixotope is created by The Future Group, an international award-winning technology company headquartered in Oslo, Norway with offices in London, Madrid and LA.

The Future Group
The Famous Group