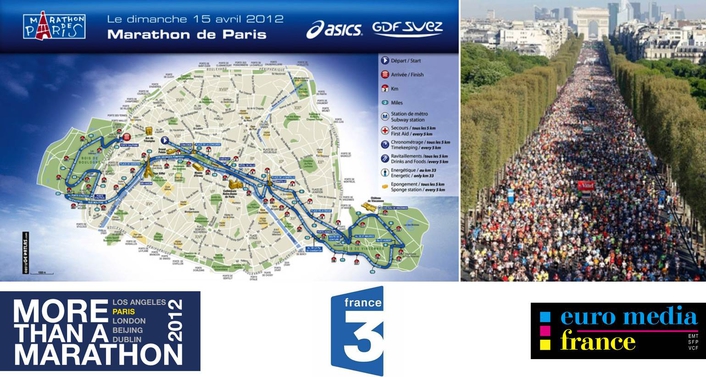 4 image bikes, 2 sound bikes and 1 travelling vehicle equipped with HF covered the Parisian streets
EMF’s RF team, whose ‘savoir-faire’ and experience in the coverage of marathons (La Rochelle, Cassis, Olympic Games) is internationally recognised, were once again present (and have been present since 1992) at the annual Paris Marathon broadcast on France 3.

Today, the Paris Marathon is one of the 5 most important marathons in the world (behind New-York, London, Berlin and Chicago), as much as for the number of participants, for the equipment put into place, as for the performances of the athletes (the 2 marathon records- men and women- were beaten this weekend).

An HF1 OB truck and another HFR OB truck completed the technical equipment on the ground, whereas in the skies a relay plane handled the broadcasting and a helicopter equipped with a Cinéflex ball filmed aerial views of Paris.

RF - Wireless technology
Specialist knowledge for full coverage of any live event
Radio frequency technology, usually known as just RF, dates back to the 1960s. Euro Media France began working with RF systems in those early days and has built up decades of experience in all types of contribution transmission.

Euro Media France’s RF Department has developed a range of transmission techniques to suit any live broadcast situation. Our systems range from wireless cameras for short-distance transmission, with reception points on the ground as part of a terrestrial network, to transmitters and receivers in aircraft and vehicles for a large-scale production over long distances.

Wireless cameras are now a major part of television work, bringing greater mobility and flexibility to news, entertainment shows and coverage of live events such as concerts and sport. Euro Media France has a wide range of systems to match these requirements, from a single camera with a multi-reception digital connection to high power links and multiple HD wireless cameras.

The demand for terrestrial coverage in the broadcasting of live events continues to grow and RF is an important part of this. Euro Media France works on RF projects of all sizes but in particular has built a world-wide reputation for its expertise in long-distance connections.

France Télévisions’ coverage of the Tour de France (organised by ASO) is a TV production that relies on RF technology. Euro Media France has been involved with the Tour from the beginning and is a crucial part of the team that makes this global TV event happen. Our expertise in this field is recognised throughout the world and involvement in events including the Paris-Roubaix (ASO), the Paris Marathon, Paris-Nice and the Dauphine Libéré has brought us many international awards.

LONG-DISTANCE CONNECTIONS - A SPECIALITY
Long-distance remote broadcasting involves the use of specialised aerial technology, which is supported by a large number of aircraft. Euro Media France has built up a full resource base for this work and can supply five helicopters and two aeroplanes for a single production.

This aerial ballet calls for perfect coordination and resource management. In a typical RF production a BN2-type plane will provide a low relay point, with a pressurised Cessna aircraft working at higher altitudes to ensure connections over mountains or when atmospheric conditions prevent flying below a set limit.

ALL TYPES OF COVERAGE
Airborne relays are not the only way of ensuring connections over long distances. Euro Media France has developed ground-to-ground systems using multiple, comparative receivers, which, if the geographical conditions are right and the technology matches the requirements of the production, do not need air support.

This lowers the cost of RF networks considerably, as does the use of flight-case systems. These “flyaway” packages are being used in place of receivers carried on 9 or 13 tonnes trucks and contain all the technical components needed to create full RF connections. Our flyaway systems can be transported easily round the world by plane. Once on site and combined with a video control room they form the basis of a professional broadcast facility.

INTERNATIONAL EXPERIENCE
Euro Media France honed its RF techniques in Europe but now exports its know-how to the world. Our technology was used to cover the long-distance races at the Olympic Games in Athens (2004) and Beijing (2008), Vancouver (2010),  the Tours of Qatar, Portugal and Germany and the World Cycling Championships.

A major challenge was the 2010 Monte Carlo Rally, which was broadcast live and in fully over the four days of the event and involved more than ten vehicles.

HIGH DEFINITION TRANSMISSIONS
An important first for Euro Media France, and sports broadcasting in general, came at the 2006 Paris Tours Race, organised by ASO, the first ever live HD RF coverage of a cycling event.

Transmitting live HD RF images is now the norm for Euro Media France. We made the next technological step forward in 2009 with live 3D images over RF for 100km of the Paris Tours.