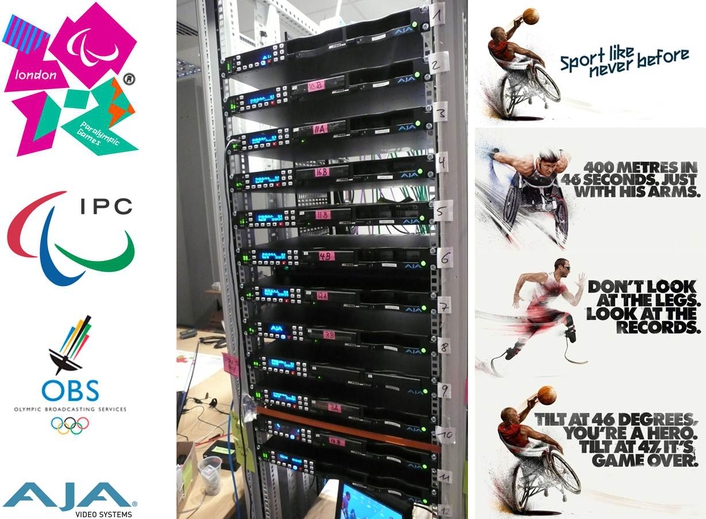 12 AJA Ki Pro Racks with assorted KiStor Drive module sizes, several Mini-Converters, Two Io HDs, a KONA card, two KUMOs and a KUMO CP were leveraged by IPC to record, edit and broadcast multiple feeds from the Olympic Broadcast Service (OBS) on sixParalympic.org channels and six video streams on ParalympicSportTV. Opening Ceremonies kicked off on August 29 and the games came to a close on September 9.

“Increasing visibility for the Paralympic games is a huge priority for us. We know a large number of people are interested in the games, but aren’t able to watch them on TV,” shared Jochen Farber, independent broadcast consultant, IPC. “Using a range of AJA gear, from the Ki Pro Rack to Mini-Converters, KUMO routers and more, we’re able to broadcast the Paralympics to a much wider audience.”

Under the supervision of Farber, the IPC team tapped AJA Ki Pro Racks to record, transfer and archive ten OBS Paralympic feeds from various sporting venues to its video server, as Apple ProRes 422. Using AJA Mini-Converters, they gathered signals for mixing in the master control and removed the incoming international audio to replace it with new commentary, mix it and then re-embed it to add mixed sound to two of its channels. Utilizing the Hi5-3D, the IPC team ran cables from their master control back to the commentary station so that the announcers could monitor the feed in realtime.

Farber added, “A project like this is a huge undertaking. It requires affordable, reliable technology to produce high-quality video that will keep viewers coming back every two years. AJA gear gives us all of that and more. The development they’ve done with vendors like Apple, Avid, Adobe and the quality of their ProRes encoding gives us the highest quality footage possible, as well as the flexibility to reuse and edit material again in the future.”

By the end of the 2012 Paralympic Games, Jochen and the IPC team will have broadcast an estimated 700 hours of coverage including live-streaming, editing, portraits, interviews and a “highlights” program that airs online twice a day. Three of the channels on Paralympic.org include interactive components so viewers can watch and choose statistics – all linked to the live video stream.

AJA President Nick Rashby said, “IPC is an exceptional organization that we’re proud to continue supporting. Their efforts to give international audiences access to such sporting excellence is inspiring. We’re excited to celebrate the achievements of these athletes together with viewers around the world.”