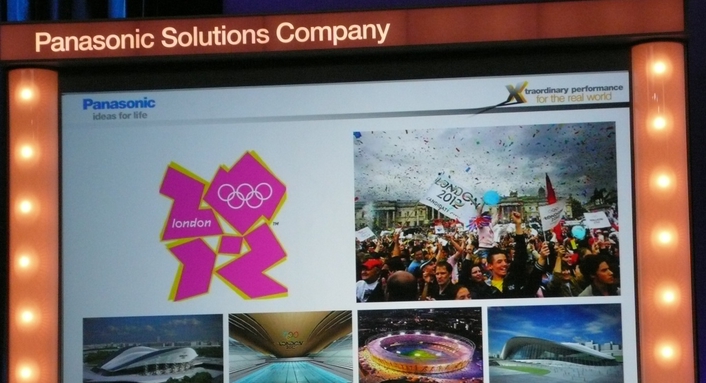 The London 2012 Olympic Games will be the tenth Olympic Games where Panasonic's digital technologies will be used as the official recording format, dating since the Barcelona 1992 Olympic Games. The official international video will be produced and distributed from the International Broadcast Centre (IBC) in London Olympic Park, in 1080/50i High-Definition (HD) format. The 19 days of competition will extend for over 640 sessions across more than 300 events in 26 sports, and the Panasonic HD video is expected to deliver the spectacular images of the world's biggest sporting event to billions of TV viewers around the globe.

“We are proud that Panasonic is contributing to the broadcasts of the London Olympics with our HD technology and latest broadcasting equipment, as we have been doing for the past 20 years,” said Kunihiko Miyagi, Director of Professional AV Business Unit, Digital Imaging Business Group, in Panasonic Corporation's AVC Networks Company. “During the London 2012 Olympic Games, we will support OBSL to broadcast more exciting image to the viewers by bringing P2HD file based workflow with fast and efficient IT technologies such as wireless, new Proxy and USB3.0. We would like to make them work at the very tough and difficult conditions of the Olympic Games. We also hope OBSL will test our latest professional format AVC-Intra 100 based on the latest H.264 technology that will realise a better quality image recorded and broadcasted to the homes in the future.”

"We are confident that the London 2012 Olympic Games will become one of the most popular Games ever," said Manolo Romero, OBSL's CEO. "London 2012 will be another Olympic Games where we produce the international signal in High Definition and bring the Games to life for the viewers around the world. Also, we value our long-term partnership with Panasonic because of their experience, evolving technologies that they promise to deliver, and for supporting us to achieve our success."

Panasonic is proud to support the Olympic movement—aimed at promoting world peace through sports—as an Official Worldwide Olympic Partner in the Audio and Visual Equipment category for more than 20 years since The Olympic Partner (TOP) Program commenced at the Calgary Olympic Winter Games in 1988. Under the slogan of "Sharing the Passion," Panasonic contributes to the success of the Olympic Games through its technology. In 2007 Panasonic renewed the partnership with the International Olympic Committee through to the 2016 Olympic Games in Rio de Janeiro.

Panasonic and the Olympics

Panasonic Corporation is a worldwide leader in the development and manufacture of electronic products for a wide range of consumer, business, and industrial needs. Based in Osaka, Japan, the company recorded consolidated net sales of 7.77 trillion yen (US$78.4 billion) for the year ended March 31, 2009. The company's shares are listed on the Tokyo, Osaka, Nagoya and New York (NYSE: PC) stock exchanges.