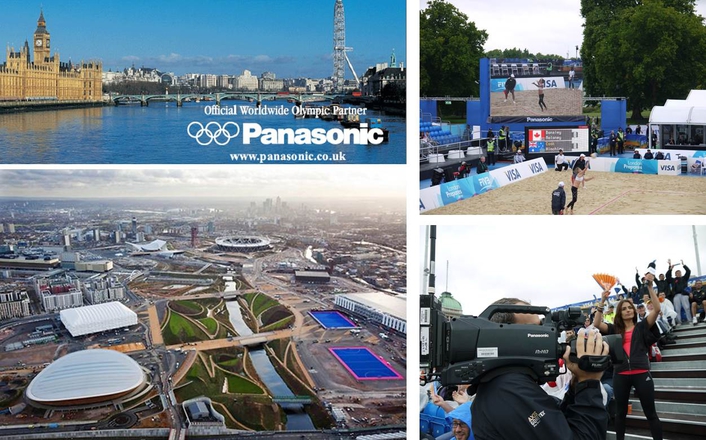 With its full line-up of highdefinition (HD) equipment, Panasonic will provide strong support for the operation of the world’s largest sporting event, at sporting venues, broadcasting sites and homes, in cooperation with the International Olympic Committee (IOC), the London Organising Committee of the Olympic and Paralympic Games (LOCOG) and the Olympic Broadcasting Services London (OBSL). Panasonic will also bring the firstever 3D Olympic Games to homes, based on the 3D technical partnership with theIOC and the Olympic Broadcasting Services (OBS).

At the London 2012 Olympic Games, the video signals distributed by the International Broadcasting Center (IBC) to the broadcasters of each country will be distributed in the HD format. Additionally, the opening and closing ceremonies and events displayed on the large screens in the venue will also be distributed in HD video. Panasonic will support the first-ever 3D Olympic Games by providing its cutting-edge equipment and technology, such as its latest integrated twin-lens 3D camera recorders (AG-3DP1).

In addition to the company’s DVCPRO HD standards that have already been adopted as the video recording format, the adoption of the file-based work flow using the high quality AVC-Intra standards has been decided. Panasonic will offer a wide range of broadcasting equipment and devices to the IOC, including the solid-state memory ENG (Electronic News Gathering) product P2HD series. Since the Barcelona 1992 Olympic Games, the London 2012 Olympic Games is the tenth Olympic Games where Panasonic’s broadcasting equipment is adopted as the recording format.

Panasonic Projectors, Displays and Camcorder for the Olympics

For the opening ceremony that will be held at the Olympic Park, the world’s smallest and lightest2 20,000 lumens projectors (PT-DZ21K and PT-DS20K) with a high brightness and high quality yet compact form will be installed. Panasonic will boost the mood of the opening and closing ceremonies by delivering vivid and impressive HD footage to the audience. Panasonic will provide LED Large Screen Display Systems, offering the largest number of screens and the largest area ever at the competition venues. At the indoor event sites, 103-inch PDP displays will be adopted for the first time in the history of the Olympic Games.

Under the concept of “Sharing the Passion,” and through providing such cutting-edge equipment and sponsor activities, Panasonic will deliver the thrills brought about by world’s top athletes along with their passion, tension and dynamic performance. The company is aiming to provide an exciting experience not only for spectators at each event site, but also for the viewers at each home across the globe through its wonderful broadcasting technology.

Panasonic Embarks on Olympic Marketing Initiative for London 2012 Olympic Games
The campaigns are organized around the following two main activities. Opening of the Corporate Pavilion, the “Panasonic Full HD 3D Theatre”, in the Olympic Park Panasonic will open its corporate pavilion, the “Panasonic Full HD 3D Theatre”, at the Olympic park located in Stratford, London, throughout the Games from July 28 to August 12, 2012 under the cooperation of the International Olympic Committee (IOC), the London Organising Committee of Olympic and Paralympic Games (LOCOG), and the Olympic Broadcasting Services (OBS). The approximately 400-square-meter pavilion will be equipped with the Full HD 3D Theater consisting of a 152-inch PDPand a 103-inch PDP. Programs including gymnastics, swimming, and synchronized swimming will be shot by the OBS by using 3D filming equipment provided by Panasonic and broadcast live. This 3D video footage will offer a sense of being submerged into the competition and provide visitors to the pavilion with a spectacular experience and a feeling just as though they are really watching the sport event at the Olympic site.

Starting Global Advertising for the Olympic Games
From June, Panasonic will start its global advertising campaign on TV and in print media with Louise Hazel, an English athlete of the Heptathlon, and Neymar da Silva Santos Junior, a Brazilian footballer. The video content, such as TV commercials and “making of” videos can be enjoyed on the YouTube Special site which will open in the middle of June. In the host country, the UK, Panasonic will develop the Olympic outdoor advertising activities in airports and London City and advertisements on buses and taxis in order to build up anticipation for the event. Panasonic has just launched the  “Panasonic/Worldwide Olympic Partner” page on the social network service (SNS) Facebook to introduce its wide variety of activities as a TOP sponsor. In addition, the company will communicate with users through the site, sharing the passion with users around the world who love the Olympic Games. Furthermore, Panasonic will also develop its original marketing campaigns and activities worldwide.