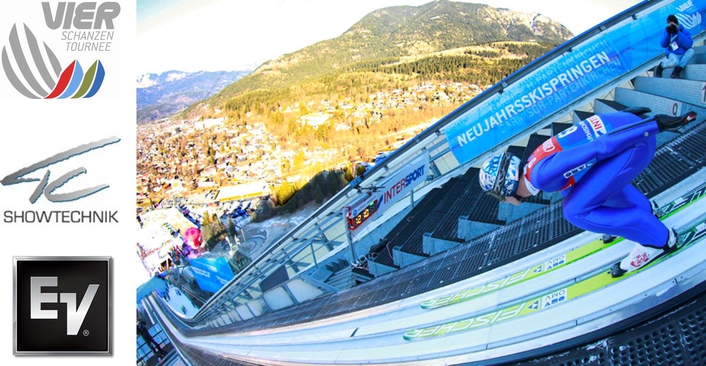 A spectacular event followed with keen attention the world over: the Garmisch-Partenkirchen leg of the Four Hills Tournament
For over 60 years, Garmisch-Partenkirchen in Bavaria has provided the stage for the first sporting highlight of the year: the New Year’s Ski-Jumping, which is one of two German legs of the Four Hills Tournament. This year, some 21,000 fans lined the landing area, as millions more followed the competition from the comfort of their homes. With each succeeding year, the level of interest seems to rise.

And – as we are seeing more and more with other sporting disciplines – spectators nowadays expect to be entertained before, after, and during pauses in, the competition itself, which means that bands performing live, presenters and warm-up men all have a part to play in generating a party atmosphere on the day of the event. In consequence, the sound reinforcement system is of ever-increasing importance. Martin Schulze, who with Stefan Rehthaler is joint managing director of TC Showtechnik, has been following this development closely – and taken account of it. For over 16 years, he has been responsible for the sound production for this traditional sporting event, and for 16 years, he has witnessed the demands steadily increasing, and made constant adjustments and enhancements to the sound reinforcement solution in response. “Naturally, the accumulated experience of previous years is always helpful,” he says, “but each year, we start from scratch with the production. This year was no exception: the set-up, for the umpteenth time, was completely new.”

Whereas last year a decentralized sound reinforcement solution with an axial orientation had been used, on New Year’s Day 2014 a combination of main and supplementary systems was preferred. For the main PA, the TC Showtechnik team opted for an Electro-Voice XLC line array. Six flown XLC 907 DVX loudspeakers and the same number of Xsub subwoofers to the left and right of the MC and show stage provided the requisite SPL. Continuous coverage was assured by delay lines with complementary systems: in all 22 Electro-Voice Sx300 cabinets (mounted on various truss lifts) and two delay towers bearing seven Electro-Voice XLE three-way compact line array elements. “A further six XLE elements – also truss-mounted – ensured that the sound quality was excellent in the fan park outside the stadium, too”, adds Schulze. To create a party sound with a powerful bass, the TC Showtechnik team charged the delay tower with a total of eight Dynacord 18’’ Planar waveguide horns in a cardioid configuration – a combination that, according to Schulze, proved highly successful: “It delivered phenomenal power,” he states, adding that: “on account of the live television broadcasts, we weren’t allowed to go full throttle. Which was a pity, in my view.” 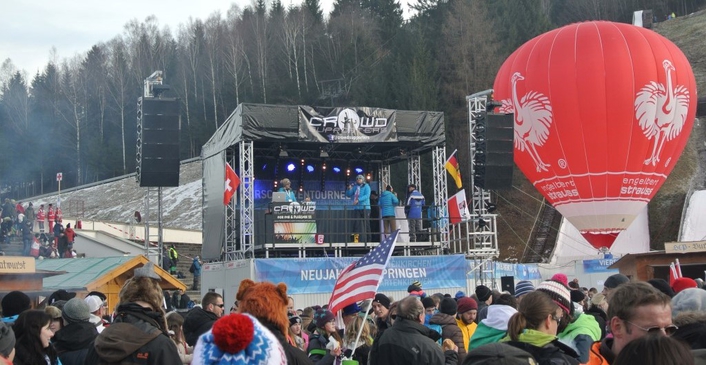 Once again, the Electro-Voice N8000-1500 controller played a key role in the production – in all, three such devices were used. “This controller makes our job much, much easier,” says Schulze. “On the one hand, it allows us to connect, control and supervise remote amplifiers, such as the powerful Electro-Voice TG 5 and TG 7. On the other, we can integrate internal communication, radio links with command functionality and a multitude of call stations, for which in this case we used a second N8000-1500. The entire network could be controlled from a single portable computer, so the degree of user-friendliness and flexibility it afforded us was considerable.”

About TC-Showtechnik
Based in Weilheim in Upper Bavaria, TC Showtechnik specializes in the provision of technical services for the events sector. With sound, lighting, stage, laser and video equipment – including 3mm LED walls – at its disposal, the company offers a comprehensive service. Its corporate structure is also flexible enough – with independent sister firms to call upon in Bayreuth and Weiden in der Oberpfalz, to ensure that the requirements even of major productions can be met.