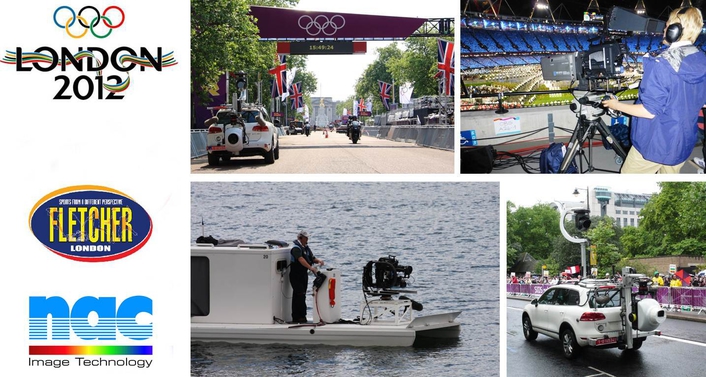 The Hi-Motion II™ cameras use a unique three chip (CMOS) sensor capable of capturing more than 10X high speed images in Full HD
NAC Image Technology is pleased to reveal that 22 of its Hi-Motion II™, Ultra Slow Motion camera systems have been used to capture some of the most iconic moments from the sporting summer so far in London.

From track and field to aquatics, from the velodrome to the rigours of rowing and road cycling, the Hi-Motion II has found itself in the centre of this summer’s sporting action, capturing stunning images at up to 1,000fps. Two gyro-stabilised units have even been mounted on camera cars for tracking shots and increased manoeuvrability, while a further unit saw duty mounted on a Wescam XR in the prow of a pursuit boat at Dorney Lake.  Hi-Motion II cameras were also at recent equestrian, triathlon, marathon, mountain bike, BMX, canoe slalom, basketball & gymnastic events.

The 22 cameras have been supplied by Fletcher London, while Fletcher and NAC have also had a support team of six people in the field ensuring everything runs smoothly at the various sports venues around London where the Hi-Motion II are being utilised.

“One of the big changes the industry has seen since Beijing 2008 is the amount of ultra-slow motion that TV directors want to include in their broadcasts,” comments Andy Hayford, International Sales Manager, NAC Image Technology. “We are delighted that so many of those ‘money shots’ this summer have been taken with the Hi-Motion II, which has worked superbly in varied lighting conditions. We’ve really been able to push up the frame-rate, slow the action down, and help the viewer get under the skin of so many sports and appreciate the supreme effort the athletes are putting into their performance.”

The debut of the Hi-Motion II™ cameras at the 2012 Super Bowl continues the legacy of the previous NAC Hi-Motion camera systems that have been embraced by broadcasters for live coverage of major global sporting events and a variety of professional sporting events, including football, international motor racing, cycling, tennis, baseball, rugby, cricket, golf, boxing and horse racing.