Moguls and Medals with Alfacam's Fleet of OB Vans

Moguls and Medals
Ski-jumping, cross-country, biathlon, snowboarding and freestyle skiing – just a few of the medal contests that will be televised around the world with a Lawo-produced soundtrack. One of Europe’s leading TV service providers, the Belgian company Alfacam, is deploying nine OB vans for the Winter Games in Canada, and all of them feature Lawo mc²66 consoles and Nova73 HD routers. 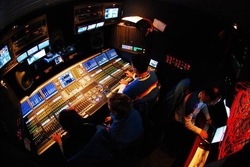 Alfacam gained valuable experience in the production of different types of international HD feeds for a major sporting festival in 2008, when the company provided a fleet of OBVs to Beijing. Using mostly Lawo mc²66 consoles, the Alfacam team praised their reliability, flexibility and ease of use, important qualities in the high-pressure broadcast environment.

This February, the Alfacam OBs are in Vancouver and Whistler, working for the host broadcaster. In the larger vans, which are staffed by up to 22 people, the console control surfaces have 48 faders and 144 DSP channels, with 1200x1200 crosspoint routing. These vehicles are providing coverage of Nordic cross-country skiing, Nordic biathlon, Nordic ski-jumping in Whistler, and the snowboarding and freestyle skiing (moguls) events at Cypress Mountain. 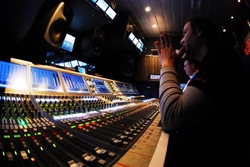 The medium-sized vans feature 32 fader consoles, with 96 channels of DSP and 800x800 routing. They will also be sent to the Nordic cross-country and biathlon events, and to Whistler’s Celebration Plaza where the medal ceremonies will be staged. As well as those officially assigned to a location, there is one spare OBV which can be deployed anywhere, according to requirements.

“The Winter Games specification called for digital 5.1 mixers,” explains Jean-Philippe Ovaert from Alfacam. “We’ve had a very satisfying experience with Lawo in Beijing and on other projects, and we’ve found that their consoles have become a reference for a lot of European production teams. The Lawo stageboxes are ideal for covering the long distances involved in this kind of event, and the design offers a very easy expansion path, such as the addition of extra DALLIS frames to distribute lots of signals to TOC.”

1/3 of the Alfacam OB fleet is equipped with Lawo mc²66 consoles. Advance preparations for the Games included the upgrade of all units to latest software and complete testing before they were shipped to Canada.

One of the mc²66 at the Winter Games