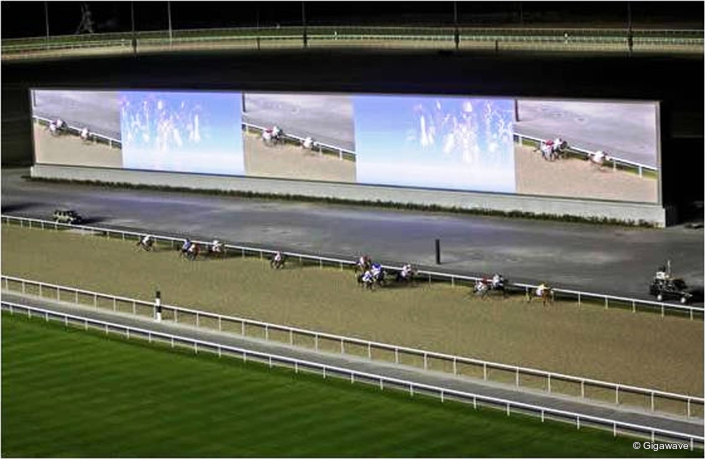 Meydan Racecourse
It cost $2.7 Billion to build, has two racecourses, a 290 room-with-a view luxury hotel, and a marina. Meydan also features a spectacular 1.2 kilometre grandstand where up to 60,000 spectators can to watch the action in comfort on a huge, 110 metre long, video display.

A gyro-stabilised camera mounted on a Land Rover 'Discovery'

Dubai Media International have been using Gigawave microwave technology to cover the 'Dubai World Cup' and other events at the old Nad Al Sheba racecourse for several years. With the opening of Meydan, this is the first time spectators have been able to watch live coverage of races on such a large screen.

Transmitted from a gyro-stabilised camera mounted on a Land Rover 'Discovery' (see extreme right of image), digital HD images are beamed to a diversity receiver in the grandstand. From here, the live images are routed to the Dubai Media International high-definition OB truck. Gigawave HD wireless cameras are also used to cover the parade ring, and VIP Enclosure, whilst Sunset and Vine used a Gigawave wireless camera to enhance their world feed coverage.

Apart from the production aspects, Gigawave MVL-HD2 links were used to transmit the programme feed from Meydan to Dubai Media International's Master Control.