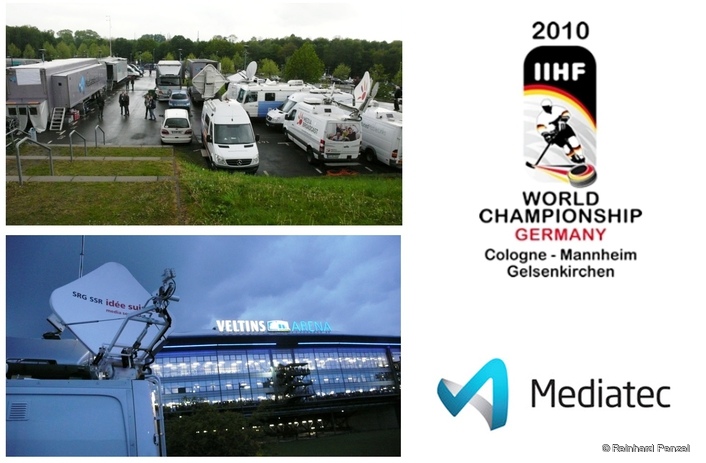 Broadcast Compound at the Opening Game in Gelsenkirchen
Mediatec has just completed a 17-day production at three German venues of the IIHF World Championship. It is estimated that the tournament reached a cumulative viewing audience of over 650 million with 70 broadcasters transmitting in over 100 countries.

The opening match in Gelsenkirchen broke the world record attendance for an ice hockey game. 77 803 excited fans cheered Germany on to a surprising overtime win over the USA.

The Production of the Opening Game USA - Germany 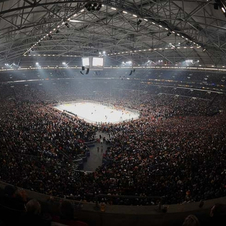 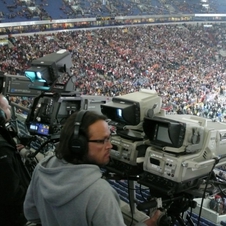 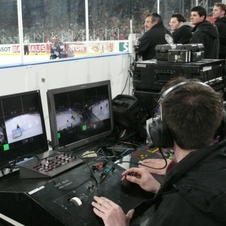 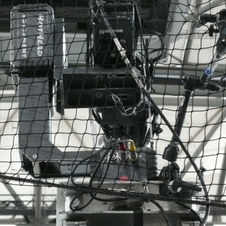 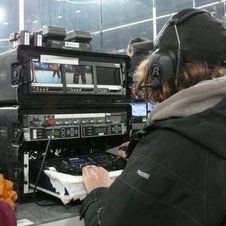 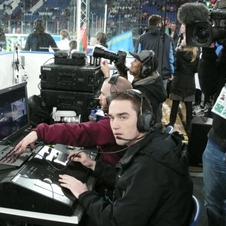 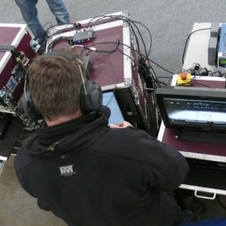 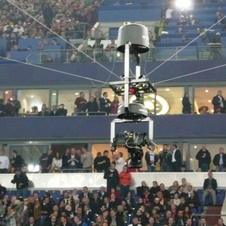 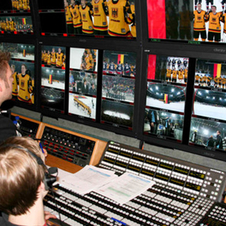 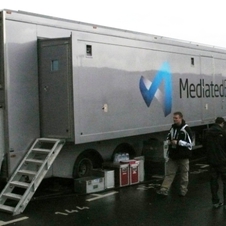 In addition to its own HD Cameras Mediatec has rented in a Spidercam from PMT and delivered stunning and outstanding pictures of the never expected victory of Germany. What a way to start the 2010 World Championship for the host country.

What was so great about the opening game? Big picture answer: everything. But let’s look at a few details.

Appearances. The people here in Gelsenkirchen had fans around the rails, filling in the usual dead space of a football field between the playing area and the stadium seating. When you walk into Gelsenkirchen for the first time and look around, you really have no idea you’re in a football stadium. And, there are no kilometres of tubes and ice freezing equipment all around the field. There are no play areas, no distracting, smaller patches of ice for kids, no loitering stadium employees. Just like a typical arena, it’s all ice and fans.

The ice. Although not flawless, there were no delays to fill in holes, no worried conversations between referees and coaches, no pucks bouncing wildly. The ice definitely got more than usually snowy as the period went on, but not so much as to affect play.

A Historic Win for Germany 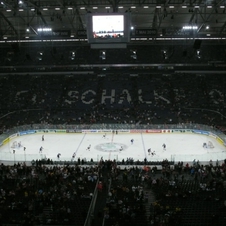 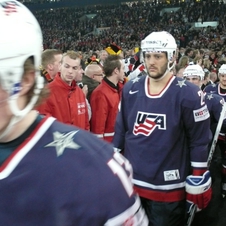 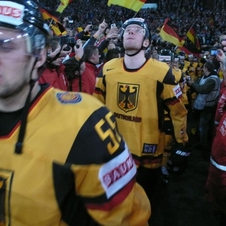 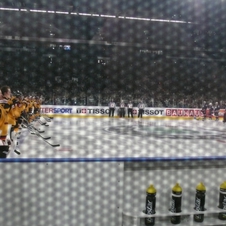 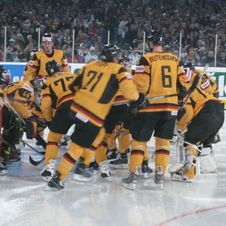 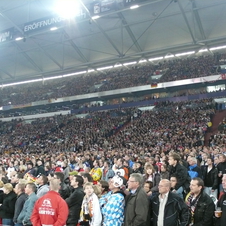 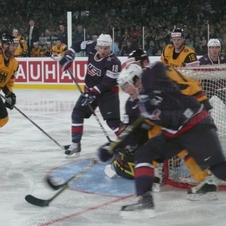 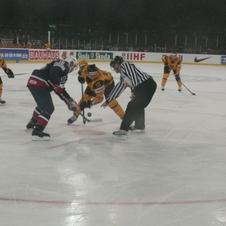 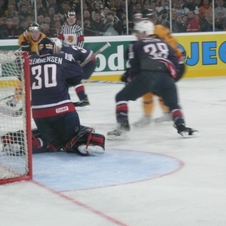 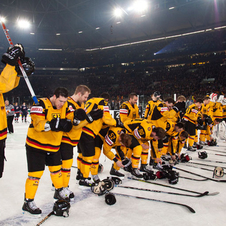 Indoor-outdoor. Because the World Championship is taking place in May in Germany, with snow long gone, a true outdoor game wasn’t possible. Moving the game indoors, but to a larger arena, was the main reason for the game’s success.

Sightlines. From the media tribune, near the back of the seating area, sightlines were excellent. In fact, there didn’t seem to be a bad seat in the house. There were no obstructed views from afar (though likely there were some closer to the action). What Gelsenkirchen shows is that you CAN have more than 50,000 fans for a hockey game without sacrificing the quality of the experience compared to a traditional 20,000-seat arena.

Cool moments. How strange is it to watch a game and have a bird fly by your laptop? How cool is it to watch the Zambonis drive out from underneath the stadium, making their way through the crowd like Ali approaching the ring? How spectacular was it to not be able to hear the referee’s whistle, the smack of the puck against the stick, the crunch of bodies against the glass because the chanting, drumming, and cheering of 77,803 fans were deafening? And how about the "Spiderman camera" that moved in the huge expanse of air above the ice and fans via a network of cables?

This was the fifth consecutive year that Mediatec has acted as host producer and distribution provider for Infront Sports & Media. This year’s productions also included IIHF Division One competition in Slovenia and Holland with a combined total of 85 matches being produced.

In 2011 the IIHF World Championship will move on to Slovakia, Ukraine and Hungary with Mediatec again providing TV production and distribution for hockey fans all over the world.

The story about the 3D production you can read at

Mediatec is one of Europe’s largest corporations working with technical solutions for event and television productions. Our idea is to supply the right technology and to make sure everything works.
The event sphere is enormous. Mediatec provides technical solutions for the media, event and sports industries. To meet the different needs of our clients, we work in four interrelated areas: Broadcast, Display, Event and Installation.
Every event is unique, be it sports, music or corporate. Mediatec has the resources necessary to make events successful. Experience, size, innovation and integration are Mediatec's key resources.

Mediatec Broadcast, part of Mediatec Group, is one of Europe’s most experienced outside broadcast corporations. We have great experience of international events in sports and entertainment and how to handle live broadcasts all over the world.
Every event has its specific requirements. To meet each of these, Mediatec works in four integrated business areas, Outside Broadcast, Mobile Links, Production and Wireless/Camera Solutions. This enables Mediatec to supply adequate solutions for any broadcast. Mediatec Broadcast has an extensive range of outside broadcast units and production facilities. These include a fleet of more than 20 OB trucks, flight-pack facilities, studios, special cameras, 30-camera link systems, uplink trucks and fiber MCR’s.

Mediatec's track record reveals credits from large-scale broadcasts such as the Olympic Games in Sarajevo, Albertville, Lillehammer, Athens and Beijing, The Wimbledon Championships, The Nobel Prize Awards and Tour de France. To this should be added the experience as supplier to the host broadcaster for the Eurovision Song Contest, UEFA Cup Final, Champions League and IIHF World Championships.