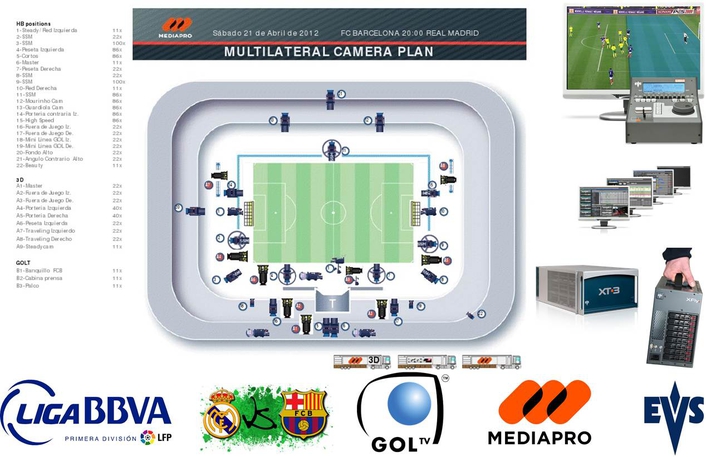 The OB vans were equipped with more than 25 EVS video servers, including the new XT3
Mediapro implemented an impressive technical deployment for the latest matchup between FC Barcelona and Real Madrid. The Spanish production company provided more than 300 technical staff, ten OB vans – one dedicated to the 3D feed – and 34 cameras.

Real Madrid defeated Barcelona 2-1 in a matchup of what pretty much every football fan on the face of the Earth agrees are the two best teams. With Barca slain, Real now sit seven points clear atop Spain's La Liga with four matches to play. And Real, who had entered the match with a Barcelona problem as troubling as Wayne Rooney's hair plugs, did it on Barca's turf by playing the same way they had in all the previously troubling El Clasicos.

Real attacked. Real took a lead, through light-scoring German midfielder Sami Khedira. And Barcelona equalized, with practically Alexis Sanchez's first touch of the game. But this time, Real flipped the script. And this time, Cristiano Ronaldo, Messi's longtime understudy, provided the decisive moment, racing onto Mesut Özil's pass through the heart of Barca's backline and sweeping home past a helpless Victor Valdes.

As he sped off to celebrate, Ronaldo held his hands out and pushed his palms down and without the benefit of words staked his and his team's claim to the title of best in the world. It didn't need to be said. It was there for all to see. Real were about to win, Real were about to clinch the league in all but fact and Ronaldo was about to beat Messi head-to-head.

The OB vans were equipped with more than 25 EVS video servers, including the new XT3. The servers were controlled by LSM remote controllers and/or EVS’ IPDirector content management suite. The LSM remote controllers were essentially used for live editing functions, clipping and the creation of playlists, as well as the production of instant replays, including live Super Motion replays in 3D. IPDirector was used to control ingest of multiple feeds, and to create highlight packages for halftime and post-match analysis. The XT3 servers were configured in eight HD/SD channels for the international signal and in six 3D channels for the 3D production.