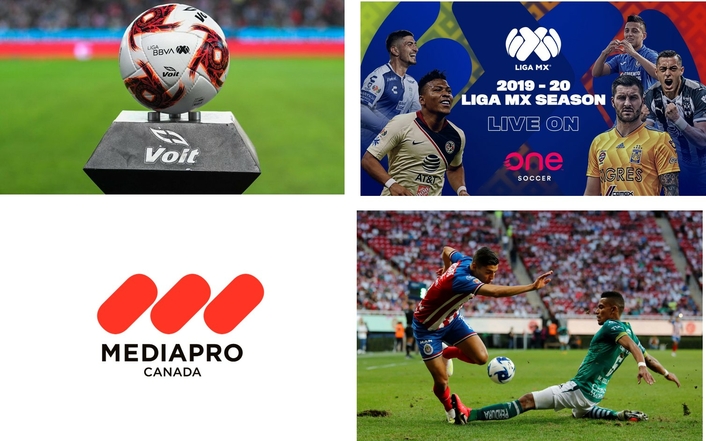 MEDIAPRO Canada has extended its agreement for the media rights to LigaMX, the top tier of Mexican professional men’s soccer, for two further seasons, through to 2021-22. Live coverage of two games per week will be aired exclusively on OneSoccer, MEDIAPRO Canada’s dedicated soccer  channel, starting from July24 . The coverage begins with the opening weekend of the Torneo Guard1anes 2020, the newly-rebranded Torneo Apertura which runs from July through to December. The new name honours the healthcare workers who are battling the Covid-19 pandemic in Mexico, with LigaMX president Enrique Bonilla commenting that the name change represents a “message of unity and solidarity”.

OneSoccer will air exclusive live coverage of two matches per week of the home games of seven clubs; LigaMX giant Club América; Cruz Azul, the champion of the shortened 2020 Torneo Clausura season; perennial title contenders UANL Tigres; Necaxa, which reached the semi-finals of the 2019 Apertura playoffs; UNAM Pumas, one of the country’s most popular and titled clubs; Toluca, winner of 10 first division titles; and FC Juárez, which won promotion to the top tier in 2019.

The 18 LigaMX clubs will play 17 games in the Torneo Guard1anes 2020, running through to November 6 -9 . The league has adapted the format of the tournament, bringing back the Repechaje match or playoff qualifier, at the end of regular season play, which could see up to 12 clubs battling for a place in the Liguilla, the season-ending playoffs in November and December. The new format will “make every point count more than ever” and will increase the league’s competitiveness to the ultimate benefit of the fans, according to Bonilla.

Tigres’ cross-town rival Monterrey took the 2019 Apertura crown, defeating Club América in a penalty shoot-out after the two clubs finished the two-legged final drawn 3-3 on aggregrate. Cruz Azul were leading the table in the 2020 Clausura tournament when play was stopped due to Covid-19, with América, Tigres, Pumas and Juárez also in the top-eight after 10 matches.

MEDIAPRO Group, which recorded annual revenues exceeding €1.8 billion in 2019, operates a fleet of over 80 High Definition and 4K Outside Broadcast units, and produces live coverage of more than 12,000 events around the world each year. The Group is currently involved in the production of 16 national soccer competitions around the world, including top-tier leagues in Spain, France, Portugal, Italy, Greece, Turkey, Kenya, Angola, Slovenia, Serbia, Colombia, Bolivia, Mexico and Canada. Mediapro Group crews produce events for the UEFA Champions League, FIFA World Cup, FIFA Confederations Cup, the Africa Cup of Nations, FIBA events, the Euroleague and Formula 1. Mediapro was also the host broadcaster of the 2019 Pan Am Games in Lima, Peru.

In June 2020, MEDIAPRO Canada signed a wide-ranging partnership with the Canadian Elite Basketball League (CEBL), the new first-division professional men’s basketball league, which will see it produce live broadcast and streaming coverage of the league’s 2020 Summer Series for national public broadcaster CBC and distribute the rights worldwide. The deal means that MEDIAPRO Canada is now the production and media rights partner for both the CPL and the CEBL, the two newest Canadian professional sports leagues and the first to return to action in 2020.

MEDIAPRO also manages the global media rights to Spain’s LaLiga Santander and in 2018 was awarded a wide package of rights for the four seasons from 2020-21 to France’s Ligue 1 and Ligue 2, where it will launch a 24/7 service, Téléfoot, in partnership with commercial broadcaster TF1,, to carry live coverage of league matches. The MEDIAPRO Group produces more than 15 TV channels worldwide, including several specialty sports channels.

With 58 offices on four continents, MEDIAPRO is also one of the most important creators of content in the world, with projects for HBO, Netflix, Amazon Prime Video, Turner, DirecTV, Movistar, FOX, Viacom and Televisa.