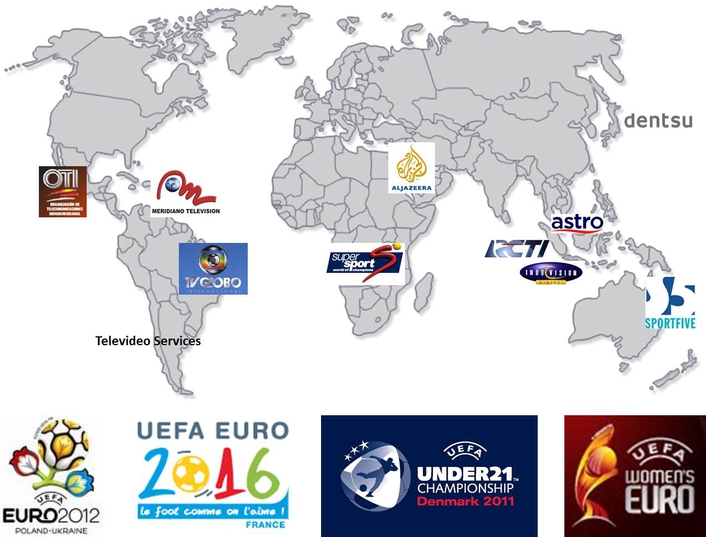 UEFA secures a number of global media rights deals outside of Europe
UEFA has announced that it has concluded a number of media rights deals for UEFA EURO 2012 and 2016 sales outside of Europe. These agreements reaffirm the UEFA European Football Championship as a compelling global property with significant interest and viewership outside of Europe. They further reflect UEFA’s continued long-term strategy to achieve the best possible media platform in individual markets by dealing directly with local broadcasters or, if and when appropriate, by using sports marketing agencies. The deals also include media rights for the 2011 and 2013 UEFA European Under-21 Championship as well as for the UEFA Women’s EURO 2013.

The mix of contracted partners provides an exceptional broadcast platform, delivering a combination of free to air and pay TV coverage and ensuring extensive distribution of these competitions. The media rights licensed include, live and delayed broadcast windows and, thanks to the platform neutral approach undertaken by UEFA, internet and mobile rights for all matches.

Commenting on the agreements, UEFA Director of Marketing, Guy-Laurent Epstein, said: “We are extremely pleased to enter into long-term partnerships with these major broadcasters. This secures a depth of top quality coverage and gives the UEFA EURO 2012 and 2016 final tournaments extensive distribution in ex-Europe, thus ensuring even greater promotion of European football throughout the world.”

These direct deals add to the existing relationships with Al Jazeera Sport in the Middle East and North Africa region and Globo TV in Brazil. Media rights in the United States of America, the Caribbean and Canada as well as free-to-air rights in Sub-Saharan Africa (excluding South Africa) are yet to be awarded.

This announcement also follows the appointment of SPORTFIVE for selected territories in Asia and Oceania, and Dentsu in Japan, for media rights sales of UEFA EURO 2012.