.
The 99th Tour de France has started from Liege (Belgium) this year. Throughout the tour, United will be available with two Satellite vehicles, United HOL-219 and United HOL-75, for Dutch broadcasters the NOS and RTL.

The HOL-219 will be used for The NOS’s ‘De Avondetappe’ (‘The Evening Stage’), and the HOL-75 for ‘RTL Viert de Zomer: Tour du Jour’ (‘RTL Celebrate the Summer: Tour du Jour’) on behalf of producer Infostrada Sports. 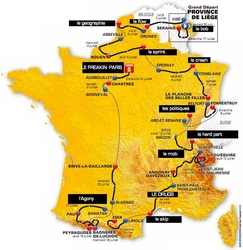 NOS – De Avondetappe (The Evening Stage)
The NOS has chosen, as in previous years, to use United HOL-219 for The Avondetappe. This vehicle has been used since 2006 to record this programme, and this year it is equipped with four cameras. In the period 30th June to 22nd July, the United convoy – comprising the United HOL-219, an equipment truck, a truck equipped with a generator, a truck equipped with lighting apparatus, two United ENG cars and three production cars – will follow the Tour to record Mart Smeets’ De Avondetappe. De Avondetappe will be broadcasted every evening by the NOS during the Tour, from beautiful, ever-changing locations. Last year it seemed that Mart Smeets’ evening programme was going to stop. Due to the excellent viewing figures, however, The NOS’s management managed to persuade Mart Smeets to present De Avondetappe, for one more year at least.

Alongside many domestic productions, United also was present this summer at the European Championships in Poland and Ukraine, and will be present at the Olympic Games in London.

United, based in the Muziekpaviljoen at the Media Park in Hilversum, provides full service facility management for media and broadcast organizations. United is able to offer a broad and diverse range of services from its many departments. United is part of Euro Media Group (EMG).