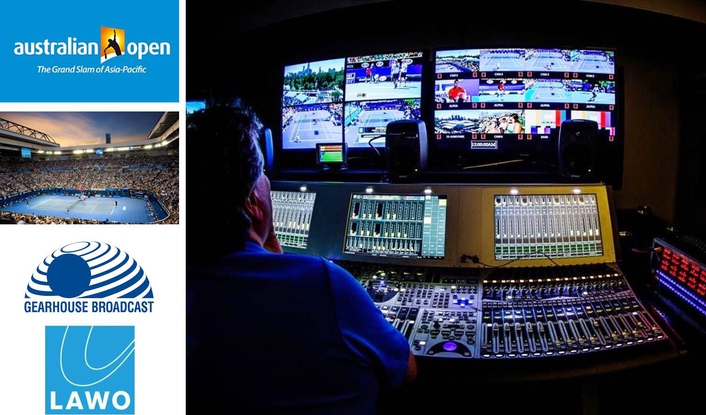 Traditionally, the tournament attracts the tennis elite to the 30 tennis courts in Melbourne Park where, from 11 o’clock in the morning till late at night, they fight each other for the prestige of victory and the €2.1 million prize money that awaits the winners of the singles games. The finals will take place at 1 February in the Rod Laver Arena in front of an audience of 14,820 tennis fans.

Lawo staff went down under in order to support Gearhouse Broadcast in setting up and commissioning the Lawo systems. Of the nine mc²56 consoles, five are networked via a Nova73 HD to provide sound feeds for host broadcaster, Tennis Australia. Four of the mixers are deployed to deliver sound from the Rod Laver Arena, Hisense Arena, Margaret Court Arena, and Courts 2, 3, 6 and 8. A further mc²56 provides the world feed for the rights holder. All stageboxes are interlinked by the central Nova73 router, and are assigned via access rights management to the respective audio control rooms. The mixed 5.1 surround signal is send to the V__pro8 units for embedding.

“The build of a system that had distribution flexibility was key for us during the design process and is why we chose to network the system. There were several surprises on the courts during the early days of the tournament and the technical infrastructure really held its own – as expected,” says Nick Bowey, Gearhouse’s Senior Audio Engineer.

“The inherent resilience of the networked system provided us with ultimate control of signals on the fly by use of extended matrix capability across 6 systems. We have also been able to provide a set of complete backup control rooms through the distribution and duplication of these networked signals” explains Bowey. And he continues: “Host broadcaster Tennis Australia is highly satisfied with the setup and its built in redundancy, and the operators love working with the Lawo consoles”.

One of the large installations is that of local broadcaster Channel 7. The console in use here is a 48 channel MKII fitted with an additional 16 channel fader module, all of which are fully utilized on every layer with the channels from five DSP cards. The console is operated in Split Mode, with two separate monitoring outputs.

“Overall we are extremely satisfied with the results here in Melbourne and a listen to the final product and output is testament to that fact,” closes Bowey.