Lawo and VSM Put in Strong Performance at Asian Games 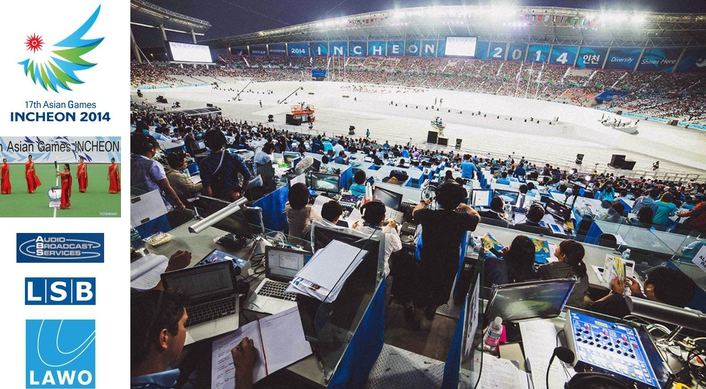 .
With a spectacular September opening ceremony in Incheon, South Korea, the Asian Games officially opened its doors on 10.000 athletes from 45 nations, who will be competing in familiar events like basketball and athletics, as well less-well-known disciplines like Wushu, Sepak Takraw and Dragon Boat Rowing.

Approximately 110 IP-based Lawo Commentary Control Units (LCU) will guarantee smooth broadcasting of the commentators’ audio, from the opening ceremony through the athletic competitions and large soccer stadium, to the Judo competition in the smaller sports halls. In addition, ten Lawo mc² consoles are being used to handle the sound mix – eight mc²56 consoles in the different venues, a further mc²56 in the International Broadcast Center (IBC), and a Lawo mc²66.

In order to ensure everything runs smoothly, a team of international Lawo support technicians is present on the games site. This 22-strong team will take care of all of the Lawo equipment, including the LCUs that are connected to the Commentary Switching Center (CSC) in the IBC via fiber-optic connections. The equipment provided by Lawo’s rental partner Audio Broadcast Services (ABS), the technical concept and onsite implementation, as well as this support service, has been provided by Lawo as a complete package.

Router links between the venues, and monitoring and scheduling of the 45 distribution channels is being controlled via Virtual Studio Management (VSM) from German company L-S-B. Fifty hardware panels and ten software GUIs are ensuring that all signals reach their desired destinations. Two more central software GUIs display the transmission schedule and status monitoring on the main monitor wall in the CDT (Contribution-Distribution-Transmission) center. In all, the Asian Games is using eight VSM systems in Korean OBVans, the IBC and a backup OBVan.

Featuring prominently among our services are audio systems based on Lawo equipment. Mixing consoles and routing matrices are currently available, as well as various types of suitable interface and infrastructure systems. Depending upon your requirements, systems are delivered ready for use, installed on-site, and your employees can be trained for and supported during the event.