Lawo and F1 – a Winning Formula

V!dee builds lightweight flyaway rig for Sky F1 coverage using Lawo’s V__pro8
The 2013 Formula One Grand Prix season has seen Sky raise the stakes on its TV coverage with a high quality and exemplary product. Along with HD pictures, the broadcaster has introduced ‘mosaic’ viewing – a choice of nine video options and features that are under the viewer’s control. Sky has also extended viewing to PCs, tablets and smart phones.

Part of this ambitious push was the appointment of Italian broadcast and satellite transmission specialist Videe as main broadcast contractor for Sky Italia, to handle coverage of the entire 2013-2015 seasons’ races.

V!dee’s F1 involvement began with a tender document issued by Sky Italia, detailing the equipment requirements and requiring costing. Having been involved in many major sport events of the past few years – including the FIFA World Cup, Olympic Games, UEFA Champions League and Five Nations rugby championship – and having therefore gained a remarkable know-how, Videe’s credentials were good. With the contract secured, work on the setup began.

“This cutting edge project, planned and tested with Sky Italia management – particular thanks here to Mr. Riccardo Botta and Mr. Tiziano Mantovani – is special because we need to keep weight and volume as low as possible for international shipping – more weight equals greater cost” – without renouncing to leading equipment, says Bruno Mercuri, Videe’s CEO & Founder. “The system needs to operate around the world in different locations and situations, including some of the world’s most demanding broadcast environments.” 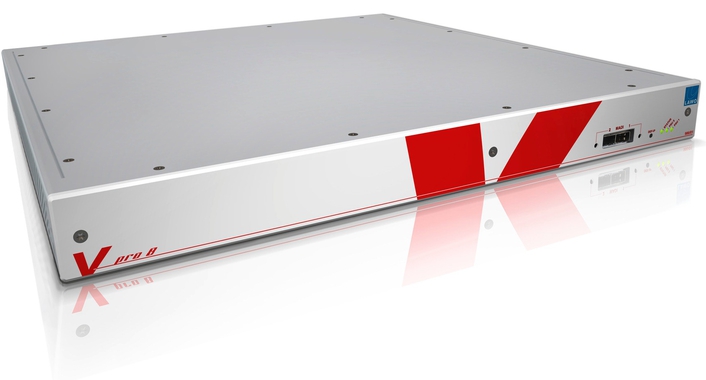 To deal with the extreme temperatures of some circuits, Videe requested four air conditioning units for the MCR to keep the air temperature down, and its robust selection of equipment ensured that there were no technical dramas. For the audio, this included a 32-fader Lawo mc²56 MkII 16-16C-0 mixing console, equipped with three DSP boards, giving 144 DSP audio channels. On the video side, Videe entered the race with a Lawo V__pro8 video processing device, providing all the tools needed for live broadcast production. This 1RU unit offers frame synchronization, format conversion, color correction, audio de-/embedding and metering, among other functions. All signals can be combined through its internal 8x8 video and 384x384 audio routers.

Videe’s relationship with Lawo began at the 2007 IBC show, while shopping for equipment to fit out its first HD OB truck: “We were looking to buy another manufacturer’s console, but we stopped off at Lawo and never went away”, Mercuri says. When the Videe team did leave, it was with an mc²66 console.
“We shoot the X Factor talent show, using the HD OB van equipped with the Lawo mc²66”, he says. “Then we usually use it to shoot football matches during the winter season in Italy and Europe.

“We started to work on the F1 project on September 2012 when we first received the relevant bid information from Sky. We won the bid last days of November 2012 and had a very short time to complete the integration”, Mercuri continues. “That system is now working around the world to produce the images for Sky Italia.
“We have one control room, the MCR, to receive the main signals from FOM [Formula One Management Limited] to integrate with signals from our cameras, EVS/Avid and graphics video systems, and to send it via EBU fiber-optic link to Sky Italia headquarters.”

For its audio, Videe headed straight back to Lawo. The mc²56 MkII uses Virtual Studio Manager (VSM) from L-S-B Broadcast Technology’s as its super-ordinate control system. It is also accompanied by a Lawo V__pro8 Video Processor for embedding and de-embedding the 5-1-channel surround audio in the video stream.
Weighing in at 2,500kg and requiring just a few hours to configure, the flyaway system provides Sky Italia with the MCR for all of its live F1 coverage – 95% of the broadcast content is created live, from the Grand Prix venue. “It is a very compact installation with an extremely small footprint. The audio requires just a single rack and a single console, and with the V__pro8 video processing unit of 1RU, the audio/video combination results in a comparably low weight, Mercuri says.

“Lawo knows what a broadcaster needs, and we found a perfect team with a lot of knowledge and patience that helped us through this process, giving us important assistance in any circumstances in which we might require it”, he concludes. “Also, with Lawo/VSM/LSB solutions, we are a step ahead in configuring and managing our systems. Innovation is essential for us, and Lawo definitely responds to our needs”.
After having won the contract and delivered the goods for Sky Italia’s F1 coverage for 2013 to 2015, Videe hopes that Sky could continue to succeed and to commit with Videe in the future – with Lawo in pole position for its audio and video work.

Lawo designs and manufactures pioneering audio and video technology for TV and radio broadcast production, post-production, as well as live performance and theatrical applications. Products include digital audio mixing consoles, routers, video processing tools as well as IP-based video and audio transport solutions. All products are developed and manufactured according to highest quality standards at the company’s headquarters in the Rhine valley town of Rastatt, Germany.