Laureus Award 2010 in Abu Dhabi
For its 10th anniversary, the 2010 annual Laureus World Sports Awards were this year staged in Abu Dhabi’s Emirates Palace. Hailed as the Oscars of the sporting world, the star-studded Laureus Awards is the premier recognition event to celebrate the world’s finest professional athletes of the year. Broadcast to a worldwide audience and profiling the top sportsmen and women, the event also raises money for children in poverty. 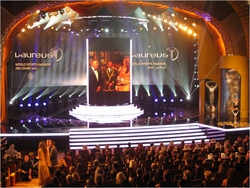 Working for production company, Done & Dusted, Creative Technology provided the prestigious affair’s screen requirements, projection and playback systems, a service it has been providing to the Laureus Awards for the past four years.

This year’s event was certainly given the Hollywood style and distinction that comes with any event held in the Emirates region. Assisting the opulent theme of 1940’s film glamour, Creative Technology provided an 18m wide x 5.4m Lighthouse R7 LED screen as the stage backdrop with a 4m wide x 6m high Chromatek 6mm LED screen for the centre stage reveal screen. This screen was raised up and down to allow the honoured athlete to appear centre stage. Eight Barco 20 thousand lumen DLP projectors were used to project the stunning graphics and images, produced by Done & Dusted, onto the backdrop, with playback via Spyder and Watchout systems. 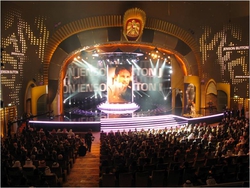 In addition CT also provided 300 Barco Mi Strips for the presenter area and main screen surround, with 250m of Schnick Schnack for the podium lightboxes. The stage set was designed by set designer Florian Weider.

The 2010 Sportsman and Sportswoman of the Year Awards were given to athletics champion Usain Bolt of Jamaica and tennis sensation Serena Williams of the USA. This is the second year running that Usain Bolt has collected the coveted prize of Laureus Sportsman of the Year.