The spectacular Al Janoub Stadium, sited in a brand-new urban district and community hub of Al Wakrah, Qatar, was one of the first stadiums commissioned for the 2022 FIFA World Cup. Its unique, flowing architecture draws inspiration from the city's cultural and maritime history and includes a distinctive and dominant roof that architect Zaha Hadid says was inspired by the region's traditional 'dhow' pearl fishing boats.

Al Janoub has been designed to be used in two distinct 'modes'. Until the end of the World Cup tournament it will have a seating capacity of 40,000. After that, the number of seats will be halved, and the venue will become the home ground for Al Wakrah Sport Club. 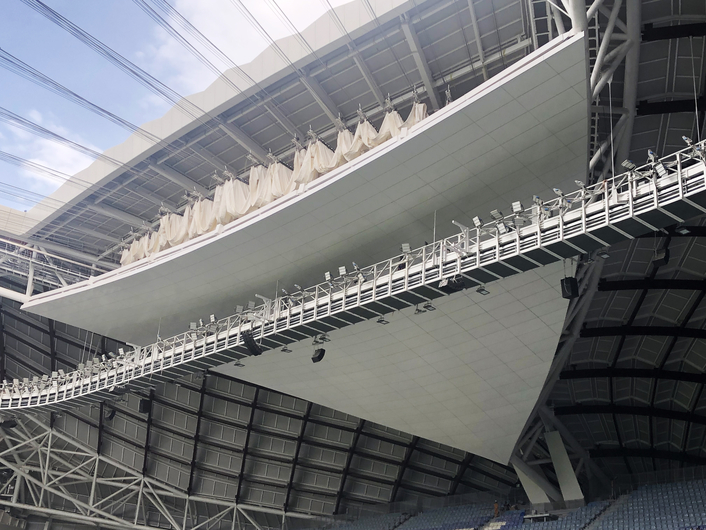 Hangs of eight Kara with SB18 subs and ARCS II corner fills at either end, are sited on the stadium’s lower ring.

Infrastructure specialist AECOM was lead consultant on the project, with acoustic design and rigging, installation and integration by Black Arrow. Antoine Saab, the AV division head at Black Arrow and his team worked hard on identifying the right solution that would meet the intended FIFA standards. L-Acoustics was the natural choice for this ambitious structure's sound reinforcement system, and both Peter Owen, sales manager at L-Acoustics, Antoine Saab and the Black Arrow teams worked closely with the stakeholders to design an optimum package that would not only meet FIFA standards but also enhanced performance expectations for legacy use after the tournament.

According to L-Acoustics' Tom Williams, application manager, sports facilities and Julien Laval, application manager and consultant liaison, the dual-purpose World Cup / legacy aspect was one of the big challenges at the design phase. "We needed two independent designs to fit the two configurations,” says Laval. “And then these had to be combined into one.”

The team arrived at the initial designs using L-Acoustics Soundvision 3D acoustical simulation software. "Soundvision was very useful for working out the mechanical limits and audio performances simultaneously, to find the optimum design in free field conditions,” says Laval. “Once the design version was ready, it was tested using the consultant's room model in order to predict if the solution was meeting their requirements in terms of SPL and Intelligibility." 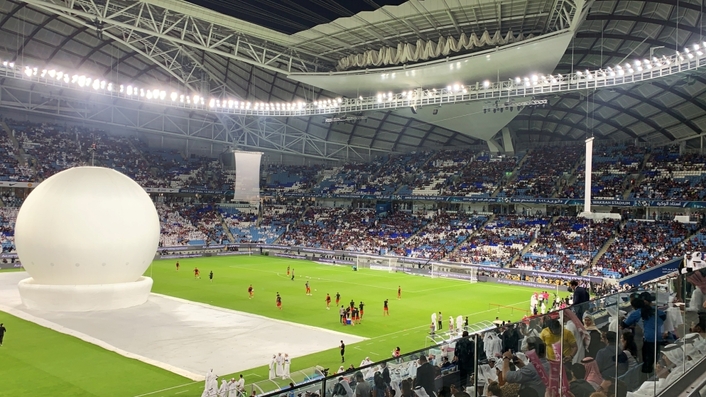 The Stadium PA system uses two distinct rigging structures: a lower ring that runs all the way around the space, just in front of the seating areas; and two long arcs that bridge the length of the stadium on either side.

The Stadium PA system uses two distinct rigging structures. One is a lower ring that runs all the way around the space, just in front of the seating areas. The other consists of two long arcs that bridge the length of the stadium on either side.

The main system is composed of hangs of eight Kara with SB18 subs as well as ARCS II corner fills at either end of the stadium to cover the lower ring, augmented by hangs of 12 Kara and SB18 subs at the centre and two ends of the long sides on the upper arc. This will also become the legacy configuration. Additional ARCS WiFo and X12 hangs on the lower ring cover the upper seating areas exclusively for the World Cup configuration.

According to Laval, this project benefited from a particularly successful engineering dialogue between the consultants, contractors and L-Acoustics, in order to constantly follow and allow for updates to the project through various phases. “L-Acoustics also provided a lot of support through the installation phase to BlackArrow and Animative,” he notes. “The client was very happy with what we achieved.”