Jumping Back in the Saddle 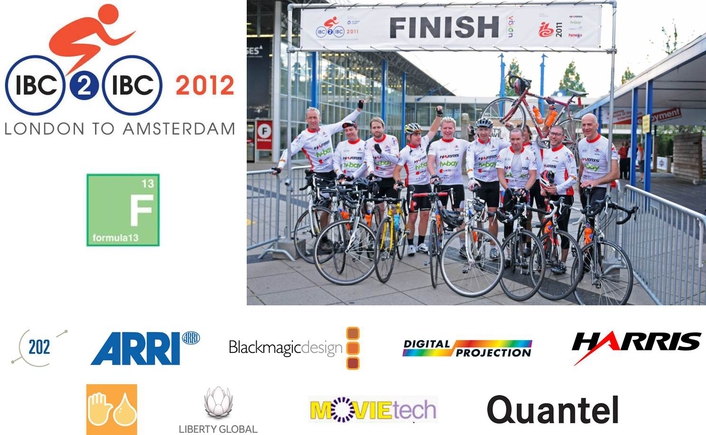 IBC2IBC Lonton to Amsterdam Cycle Ride 2012
Following the huge success of last year’s inaugural London to Amsterdam charity cycle ride, 12 cyclists will set off at 7:30 am on Monday 3 September to do it all over again!

The challenge is to ride from the offices of IBC in London 300 miles to the RAI in Amsterdam for the IBC Show, the premier event in the creation, management and delivery of broadcasting media and entertainment (hence the name – IBC2IBC).

In 2011, 10 riders raised an incredible £36,000 for Vision Charity, which has gone a long way towards changing the lives of blind and visually impaired children around the country.  This year, thanks to extending the invitation to riders outside the media industry, money is also being raised for both Vision and VICTA charity, another UK based charity creating life opportunities for blind and partially sighted children and young people, as well as support for their parents.

Hollyoaks actor and presenter Matt Littler and British racing driver Tom Chilton are two celebrities taking part in this year's ride.  Matt in particular knows all about how tough cycling can be having recently presented at the Olympics men's Road Race.

Ciaran Doran, a seasoned veteran of long distance cycling, and one of the 2011 participants said, “Everyone involved has done a marvellous job. Last year was a huge physical and psychological challenge but all of us are very, very happy to have been able to contribute to the Vision and VICTA charities in this way”

Donations can be made online through www.virginmoneygiving.com (search for IBC under fundraising event) or text vibc11 and the amount to donate (up to £10) to 70070.  Every penny raised will be split equally between Vision Charity and VICTA.

Vision Charity
Vision Charity is best known as the TV industry charity that gives blind and visually impaired children a better chance to succeed in life. Vision Charity was created in 1975 by the professional and corporate television industry, but since then it has broadened its reach beyond the Visual Communications Industries.
Their primary aim is to raise money and provide access to facilities and equipment for blind and visually impaired children. They have provided equipment including sensory rooms, the Katie Price playground at Dorton House School as well as weekend breaks for these children and their families.