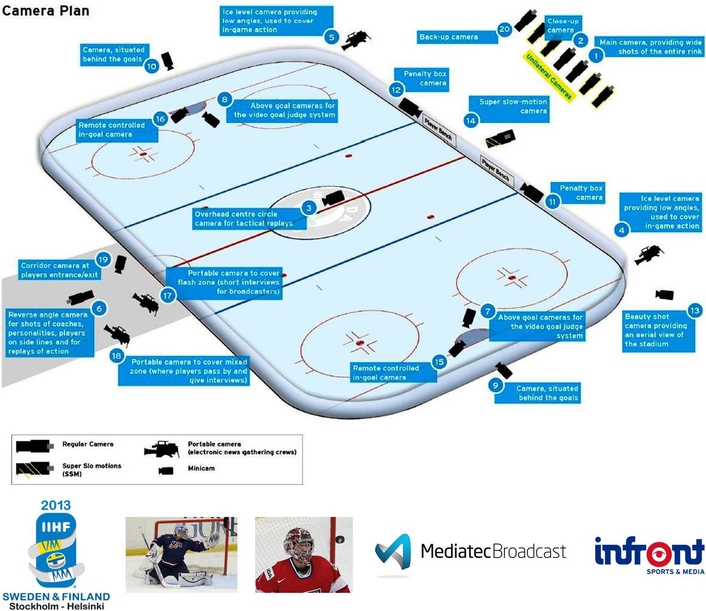 UltraMotion High Speed Camera adds spectacular new perspective and enhances the viewer experience
Infront Sports & Media, the exclusive media and marketing partner to the International Ice Hockey Federation (IIHF), has introduced an enhanced media production operation for the 2013 IIHF Ice Hockey World Championship, featuring an Ultra High Speed Camera (in use from the semi-finals onwards) along with two additional remote cameras positioned behind each goal. Running from 3 to 19 May in Stockholm (Sweden) and Helsinki (Finland) this year’s tournament will deliver the very best viewer experience to date for its fans.

Bruno Marty, Infront’s Executive Director Winter Sports said: “Our long-term relationship with the IIHF allows for continued and sustainable enhancement of the television product. By implementing technological innovations on a regular basis, we strive to constantly improve the viewer experience. This year, the Ultra High Speed Camera adds a new dimension to the production layout to accurately convey the full excitement of the games — capturing more speed, passion and drama than ever before to provide images that are beyond the capabilities of the naked eye.“

Introducing innovation year-on-year
Infront has been the exclusive commercial partner for the International Ice Hockey Federation’s (IIHF) premier event for over three decades and handles the top-level host broadcast production of the annual tournament. This year, there will be over 20 cameras in use, capturing the action from every conceivable angle for each and every game. All 64 games will be produced in HDTV format to ensure the highest quality for broadcasters. The media production is overseen by Infront’s specialist team and carried out by Mediatec Broadcast AB, a Swedish outsourcing and production company based in Stockholm.

The latest enhancements offered by Infront follow a long line of broadcast innovations: In 2001, the first in-goal cameras were introduced which provided fans with a superb goal perspective of the games. In 2008 the semi-finals and final were covered live in stereoscopic 3D HDTV. This was the first time that a major ice hockey tournament was being produced in 3D. Infront also introduced a camera position above the centre circle which provided a ‘birds eye’ view of the action. In 2009 the full HD programming of all matches offered even more depth and clarity to the TV image.

In 2012, the IIHF Ice Hockey World Championship has reached a new record cumulative audience of more than 900 million worldwide in 114 countries with over 4,500 hours of coverage broadcast.