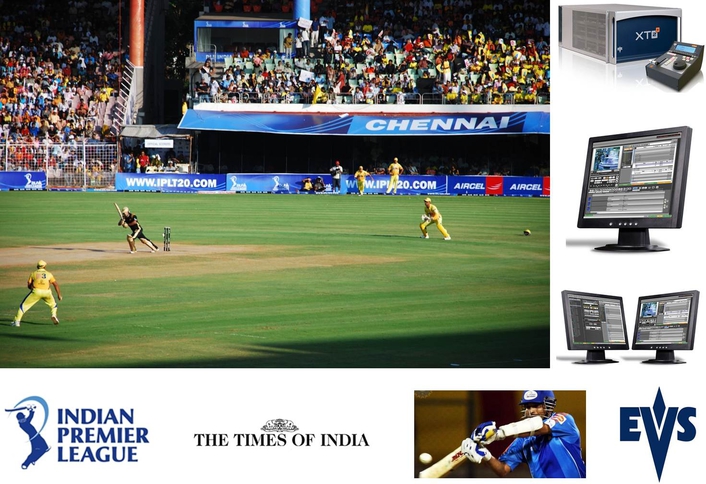 Since the 2008 launch of the Indian Premier League, every cricket match relies on EVS technology for live coverage. To cover all 74 matches of the 2011 season, an extensive EVS infrastructure been deployed offering world class production to worldwide cricket fans. For each match coverage, the set up consists of eight XT2+ 6-channel production servers under the control of MulticamLSM to record with all cameras, including super motion cameras, for advanced live slow motion replays and on the fly edits. In addition, the IPL TV rights holder for the local Indian market, Sony Entertainment Television, operates two EVS XT series 6-channel servers with IPDirector for IPL studio shows.

To fulfill these requirements, EVS supplied an integrated solution consisting of two sets of IPAirEdit XT2 servers located at two Times of India bureaus. Each system is configured to loop record incoming live feeds from the OB encoded in Avid DNxHD codec while simultaneously delivering two modified feeds for online streaming. Based on the IPAirEdit content control software, the operator delays the cricket feed by 5 minutes which allows him to insert local commercials aimed at online audiences. A secondary delayed feed is also provided without local insertion for non-Indian audiences. Following an “over,” or whenever a “wicket is taken,” the operator selects advertisements and uses the “Overlap” function to insert them into the live feed.

Commercials are uploaded to the server using the XTAccess system which is EVS’ gateway and transcoding solution. Following the ad insertion, final delay outputs are transferred to Digital Rapids for streaming.

“The addition of EVS XT2 servers with IPAirEdit has greatly streamlined our workflow. The initial implementation was a breeze and our operators really took a liking to the no-fuss interface,” says Jaikishen Baliga, Vice President of Times of India, Times Internet Ltd. “We have been able to increase our revenue by efficiently inserting more of our own ads into the feed. With the reliability of EVS servers, we have no concerns for the stability of the system.”

The project was carried out by Shaf Broadcast, EVS’ long time distributor in India from EVS’ India branch. The IPAirEdit module of the IPDirector combines EVS’ historical expertise in delay applications, which have been reengineered by the company over the past 15 years using the latest generation of servers and applications. EVS solutions are winning over today’s competition, providing the most reliable and powerful system to cater to the complex needs of HD delay and insertion.

“We are very proud to be working with the Times of India on such forward thinking sports telecast projects,” says Olivier Heurteaux, EVS APAC General Sales Manager. “The Internet broadcast of major sporting events presents unique challenges for broadcasters and consumers. But EVS’ and TOI’s common strive for innovation combined with practical, solid solutions ultimately benefits all parties.”