IGBS UP TO A NEW CHALLENGE 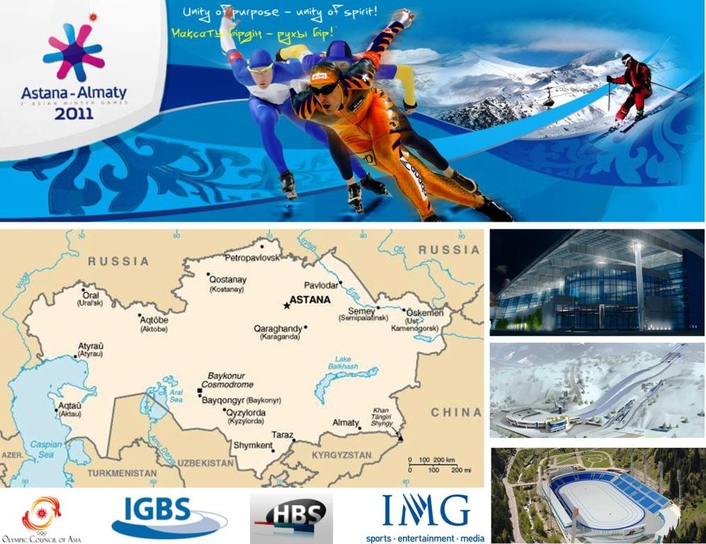 In February 2011, Kazakhstan will host the 7th Winter Asian Games
International Games Broadcast Services (IGBS) - the 50/50 joint venture between HBS and IMG that delivered the Host Broadcast Operation of the 2006 Asian Games in Qatar - has signed a contract to implement the event-time broadcast deliverables for the upcoming Games in Kazakhstan. The contract, signed in accordance with the Olympic Committee of Asia, also involves Ssang Yong, the Korean IT and Timing Company, another partner involved in the much acclaimed implementation of the Doha Asian Games.

The Local Organizing Committee in Kazakhstan (AWAGOC) decided to hold the Games to capitalize on the advantages afforded by the country’s diverse climate and rich natural conditions, in two key Kazakh cities.

The area around ALMATY, in the South, is perfect for Alpine skiing, biathlon and short-track. ‘Medeo’, a high mountain skating rink, is currently under reconstruction for such events. Not far from this venue is the Shimbulak ski resort. In the foothills of Zailiyskiy, Alatau, a new ski-biathlon stadium is being built.

The ski area will thus be increased five-fold with Almaty airport also undergoing an extensive upgrade.

Other Asian Games venues are situated in the capital ASTANA, where modern stadia and sport complexes are busily being erected.

“The greatest challenge, says Francis Tellier, the CEO of IGBS, is going to be the short lead time for us to get prepared as the event takes place early in the New Year. But our team has already etched out its master plan and resources are being contracted as I speak.”

Graham Fry, Steering Committee Member of IGBS, adds: “Everyone is truly excited by this project whereby our combined knowledge of working on winter sports over many years and in many parts of the world, will hopefully stand us in very good stead. The combined experiences of IMG and HBS have again married together perfectly to form a strong Host Broadcaster alliance and although the timeframe is quite short, we are confident of putting on a great show in Kazakhstan.”

According to the near to final competition schedule, events are to be held in 12 separate sporting venues, with more than 2000 athletes from 26 Asian countries taking part in the Games.

A team of experts - including IMG’s Mike Wilmot, Dave Shield, Tony Gavin and Peter Angell, the HBS Head of Project, along with several other HBS veterans - are already hard at work, planning the next steps after an in-depth reconnaissance of the event venues this week.

The operational implementation of yet another exciting challenge has started for IGBS.

In October 2004, IGBS (formerly known as DAGBS) was awarded full implementation of the 15th Asian Games Doha 2006 Host Broadcast operations by DAGOC, the local Organising Committee in Qatar and subsequently awarded the first edition of the Asian Beach Games Bali 2008. IGBS has its headquarters in Switzerland.

HBS, one of only two companies in the world dedicated to host broadcasting. As the Host Broadcaster of the 2002, 2006, 2010 and 2014 FIFA World Cups™, HBS is responsible for the most watched sporting event on the planet.

The combined skills and experience of the two parent companies make IGBS a genuine and unique "turn-key" Host Broadcaster, drawing experienced personnel and expertise from the top levels of the television industry.