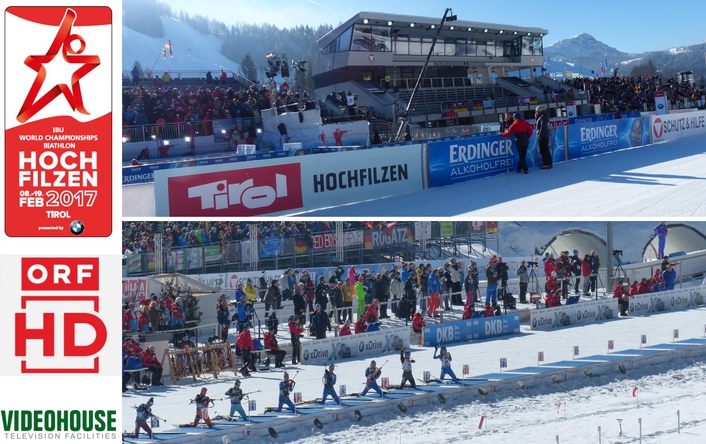 The production of an international signal of a biathlon competition is one of the greatest challenges for a TV production crew. The goal for the ORF team was to deliver a top quality, unbiased international coverage in close cooperation with IBU, EBU and the local Organizing Committee Hochfilzen 2017 to a worldwide audience. To achieve this ORF hired in two HD OBVans and the related technical crew from the Belgium production company Videohouse. 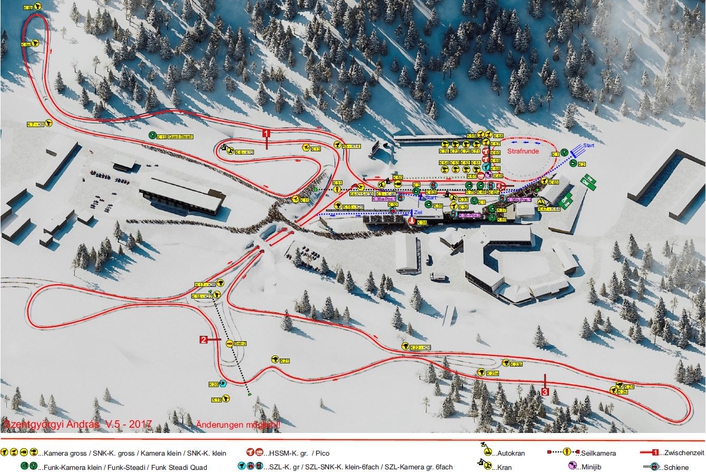 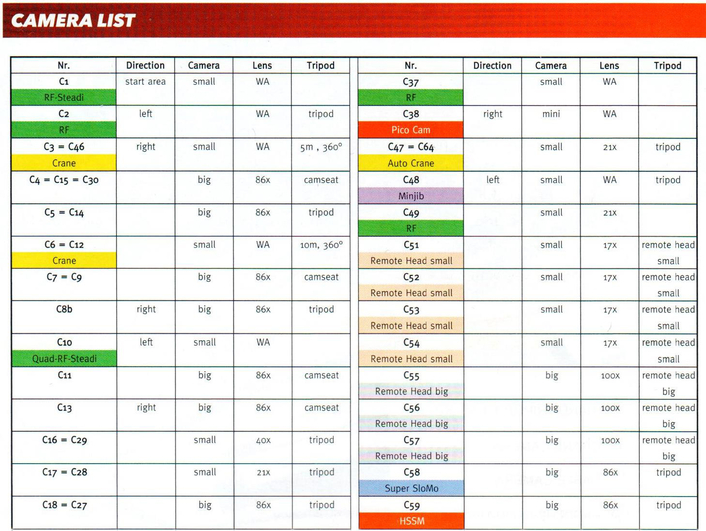 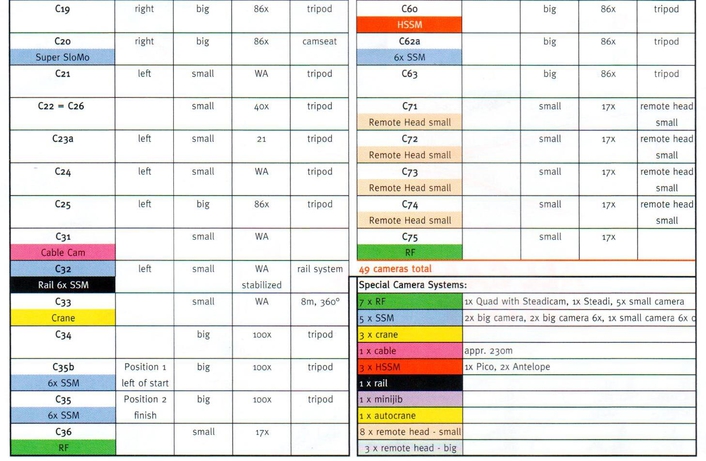 The clear focus of the teams of ORF and Videohouse was on the beautiful sport of Biathlon, by telling a definitive storyline of the drama of each race. ORF brought together their top qualified director, producers, camera crews and operators, experienced in the coverage of major sport events, involved in winter sports for years and devoted to capture the action, drama and intimacy of Biathlon. 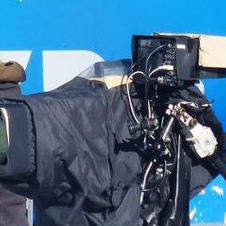 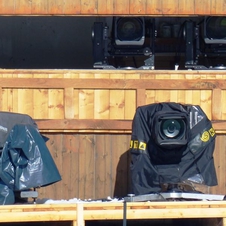 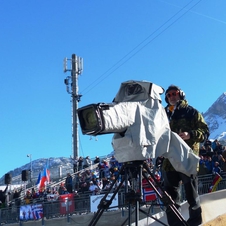 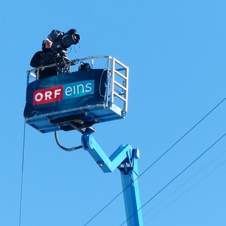 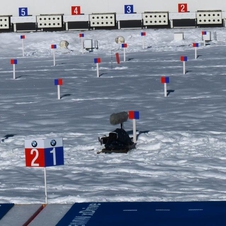 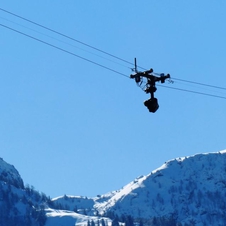 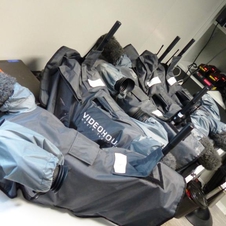 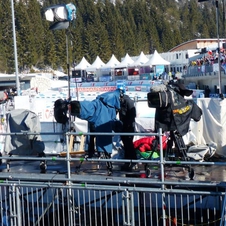 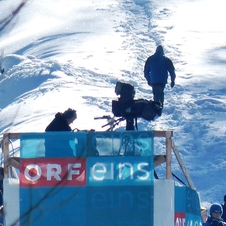 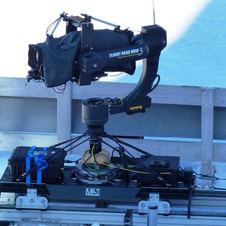 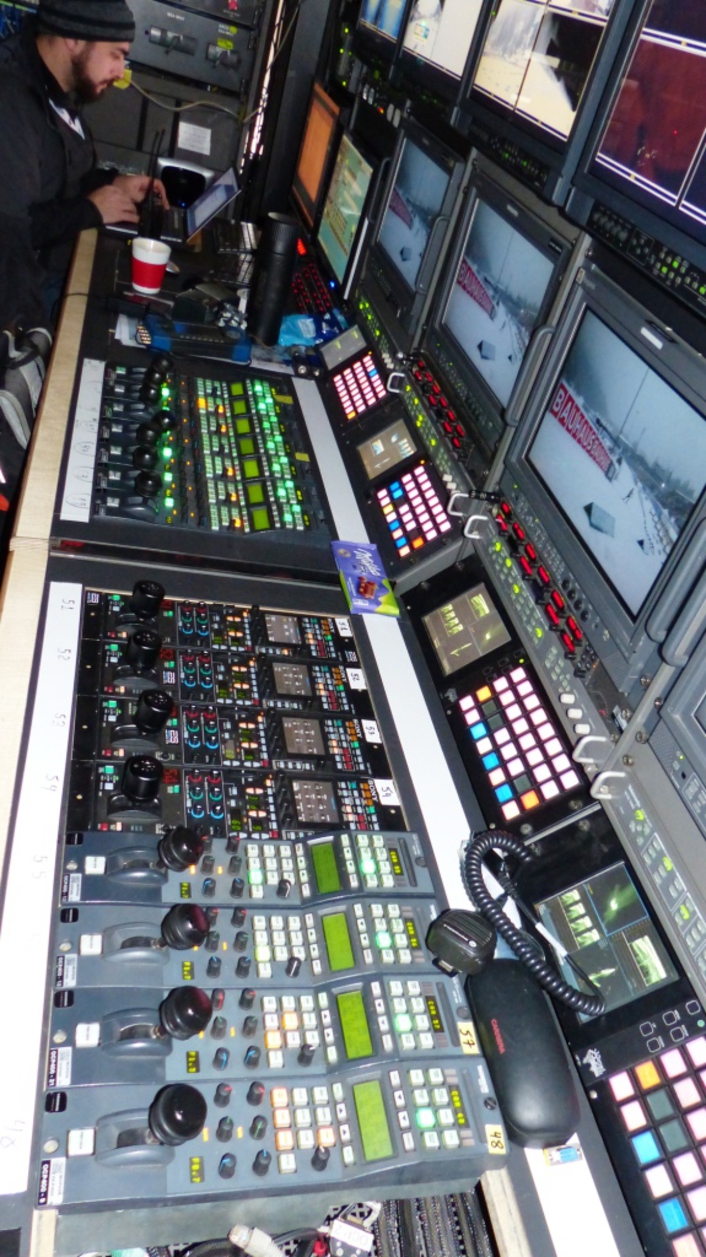 The use of innovative camera angles, rope and rail cameras (by MAT) as well as super slomo and hypermotion cameras (by LMC) helped to show the spectators the tension, the twists and the excitement of the competitions. Another essential factor of the production was the integration of the beautiful landscape of Hochfilzen and the colourful atmosphere the spectators have created during the events. 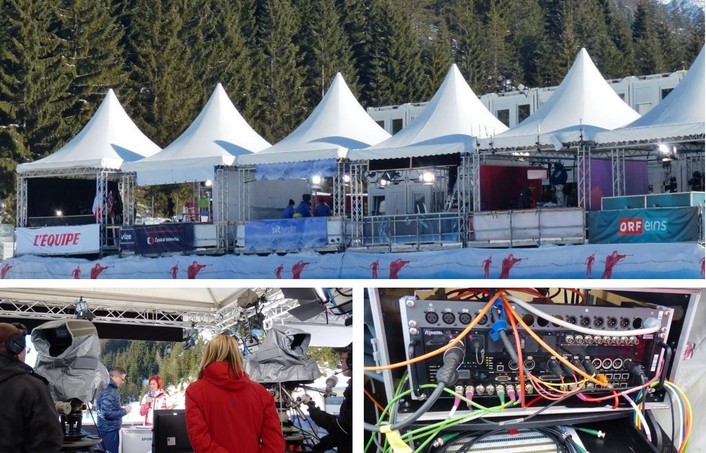 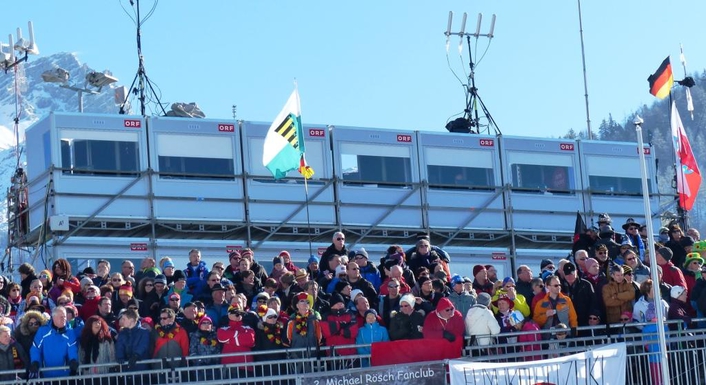 Commentator Positions at the Biathlon Station in Hochfilzen 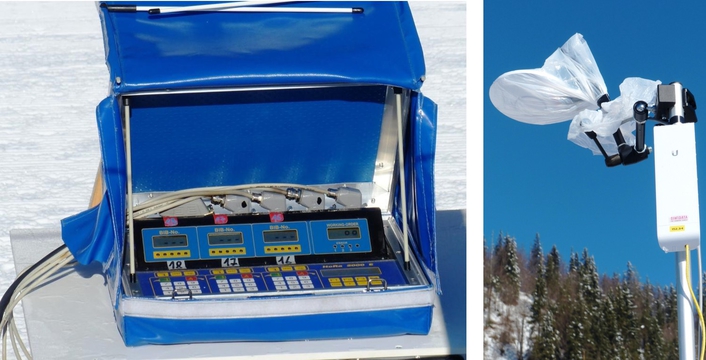 The IBC was located next to the OBVan compound and very close to the Biathlon stadium. The IBC was a temporary construction, build by using 48 containers. The distance from the IBC to the finish area was about 200m the main facilities of the host broadcaster such as master control room, booking office, frequency coordination, TOC, etc. was accommodated within the IBC. Furthermore the IBC offered all services rights holding broadcasters needed for the production of their unilateral signals and was the gateway for all international broadcast transmissions. 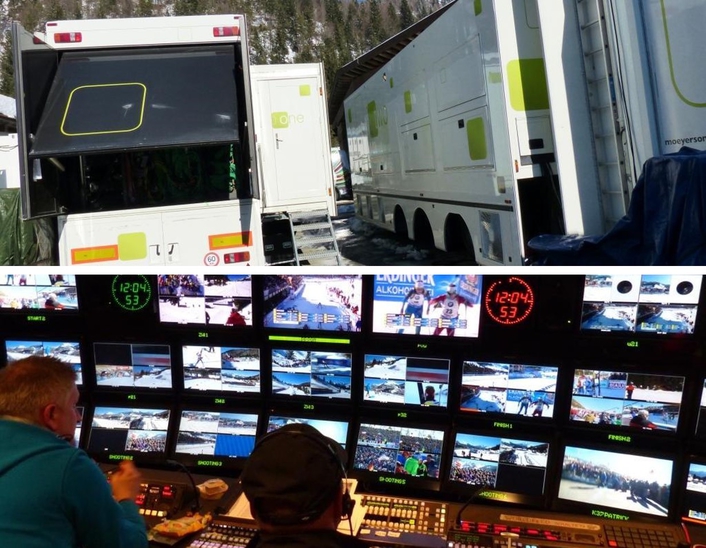 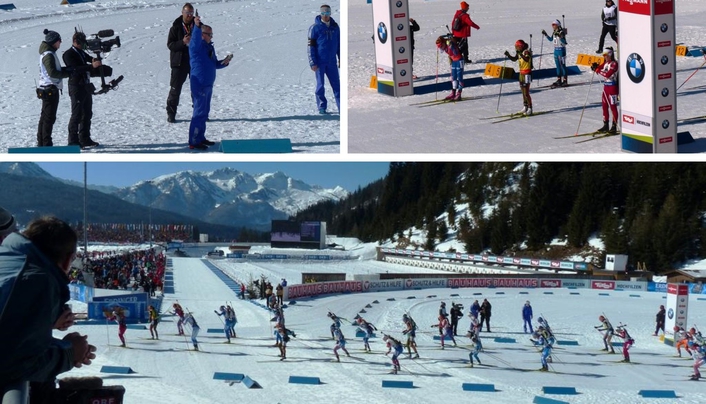 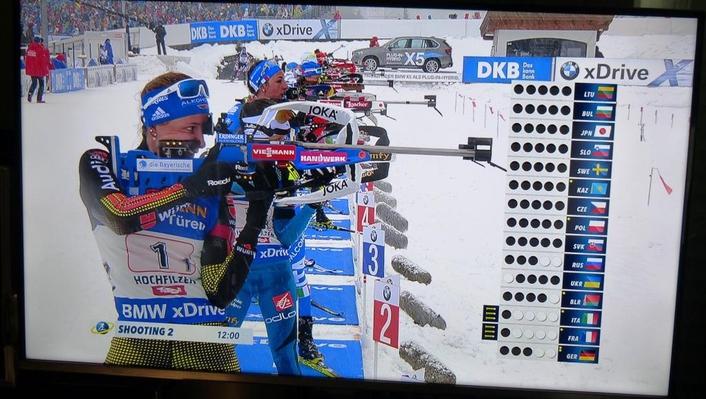 Graphics at the Shooting Range

Production of the Graphics for the Shooting Range 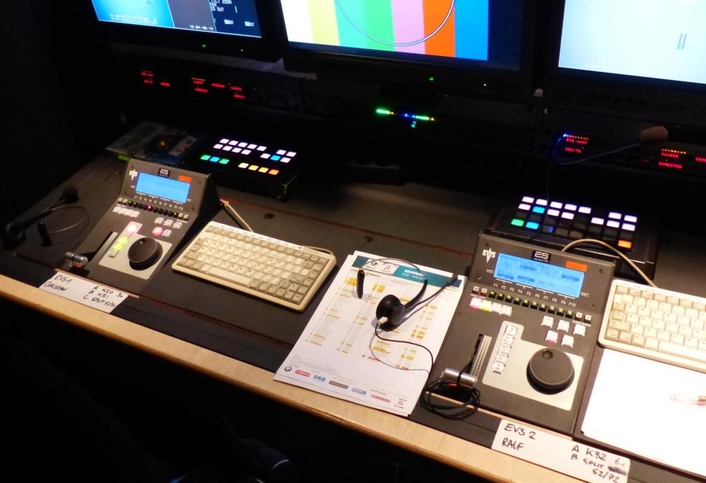 One of the SloMo Control Desks 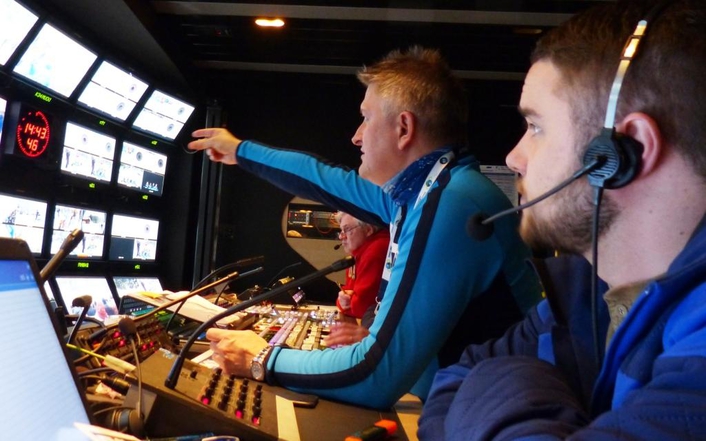 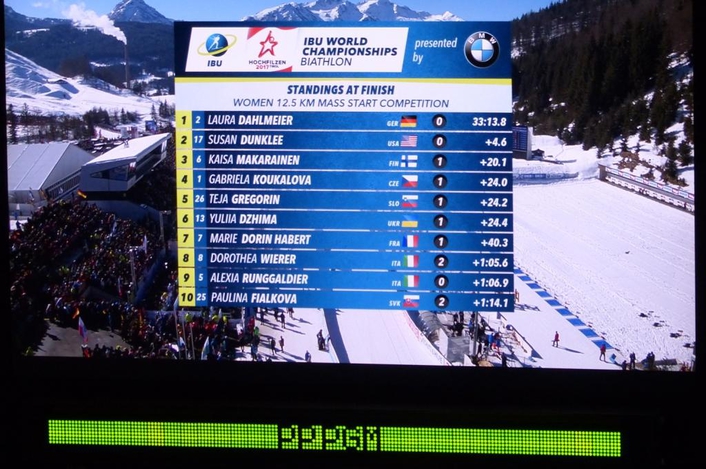 The MCR/TOC, located within the IBC, was the centre for coordination, contribution and distribution of all signals and feeds. All multilateral and unilateral signals were monitored and processed at the MCR/TOC and then distributed to the unilateral broadcasters and the EBU. In addition to the world feed, clean feed, isolated camera feeds, beauty cameras, colour bars, black burst reference, test signals and time were provided.

All signals passing the MCR/TOC were synchronized with the sync pulse generator / main reference of the host broadcaster (HB). The MCR/TOC was also the gateway for all unilateral interconnections. This included distribution panels for the HB signals and feeds, as well as fibre termination panels and connection panels for incoming and outgoing VandA- and/or audio-circuits. 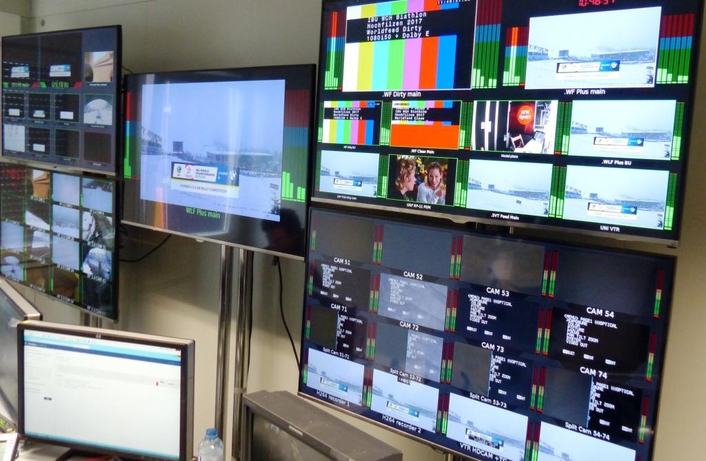 The ORF/Videohouse host broadcast team achieved acclamation not only from all the rights holding broadcasters on location but also from the worldwide Biathlon community. Meanwhile the last bullets are shot, the medals are handed out and the fans left – on behalf of the IBU board members president Anders Besseberg and Vice President of information Ivor Lehotan used their chance to review the past 11 days.

“Soon we’ll end the season’s highlight. The great diversity of nationalities, the perfect weather and the nerve-wrecking and – more than anything – fair competitions made up for World Championships we’ve never seen before in the history of biathlon. I can’t think of WC that have been as exciting as we’ve seen it now. Whether it’s been winning athletes with bib number four or with bib number 96, surprising winners like Bailey or the enormous attention by the media. After every bullet there were cheers in the stadium and the location itself has done it’s job: the infrastructure in Hochfilzen is unique.” 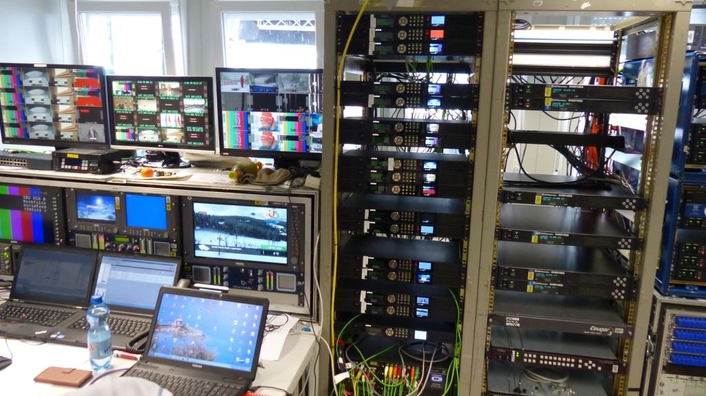 The IBU president was particularly pleased not only regarding the high level of fan interest but also about the worldwide media coverage and the sensational TV quotas. Thanks to the ORF with 170 staff members and 49 cameras under the direction of producer Michael Kögler, outstanding impressions of the event were broadcasted in almost 60 countries worldwide. Besseberg further stated, that statistics like that make him proud, especially if one notices that only with regard to Germany over five million fans watched the competitions on TV.

The World Championships in figures:

1.300 staff members of the organising committee

11 competitions, 33 medals, records for Laura Dahlmeier with 5xGold at World Championships; the closest decision in the Men’s Sprint with a difference of 0,7 seconds between Gold and Silver

After Hochfilzen the Biathlon community moved on to the World Cup in PyeongChang in South Korea which also has been announced as a Pre-Olympics test event. The test events are designed to check whether the competition venues are prepared and operationally ready for the Olympics next year. PyeongChang isn't a stranger when it comes to hosting Biathlon competitions. The alpine town previously staged the World Cup in 2008 and the World Championships in 2009.